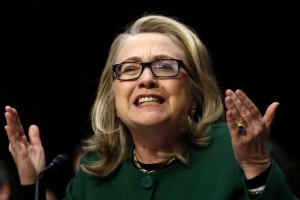 It’s been a long time coming, but the lawsuit brought by Judicial Watch, demanding the release of emails and other documents related to Benghazi and Hillary’s emails hits federal court on Thursday March 31st.  The case that was filed in Dec of 2012 had been thrown out of court until it became known that Hillary used an illegal private server and the emails did indeed exist.  The suit was reinstated in May of 2015.  The original suit was filed after Judicial Watch asked for and did not receive information on a commercial was launched on Pakistani TV entitled,  “A Message from the President of the United States Barack Obama and Secretary of State Hillary Clinton.”  It was an apology from the United States for the internet video that caused the attack in Benghazi.

“The advertisement was seen as an apology for the Internet video that President Obama, then-Secretary of State Clinton and other administration officials falsely blamed for inspiring ‘spontaneous demonstrations’ resulting in the attack on the U.S. Special Mission Compound in Benghazi, Libya.”

Initially the court was told the records did not exist, but from a previous FOIA lawsuit (Freedom of Information Act) JW found an email from Hillary aide Patrick Kennedy, of the Chappaquiddick Kennedys, that told the lawyer in possession of the electronic records   “to destroy all electronic copies of a classified email found in records Clinton decided to turn over to the State Department six months before,”  David Kendall, Clinton’s private attorney refused to do so because, “Congress and other investigators had demanded electronic records be preserved.”

Tom Fitton of Judicial Watch commented on whether or not he thought Clinton would be charged in the email scandal and subsequent cover up:

“I think it’s going to be difficult for the administration not to prosecute her.  I think Mrs. Clinton thinks things are the same as they’ve always been in Washington and that she can, essentially, use the power of her running for the presidency and the powers associated with that to avoid accountability.”

Fitton said that Clinton did knowingly and willingly violated the law and there is no way prosecutors can avoid prosecuting her.

He obviously doesn’t know Obama or the head of his Injustice Dept, Loretta Lynch.