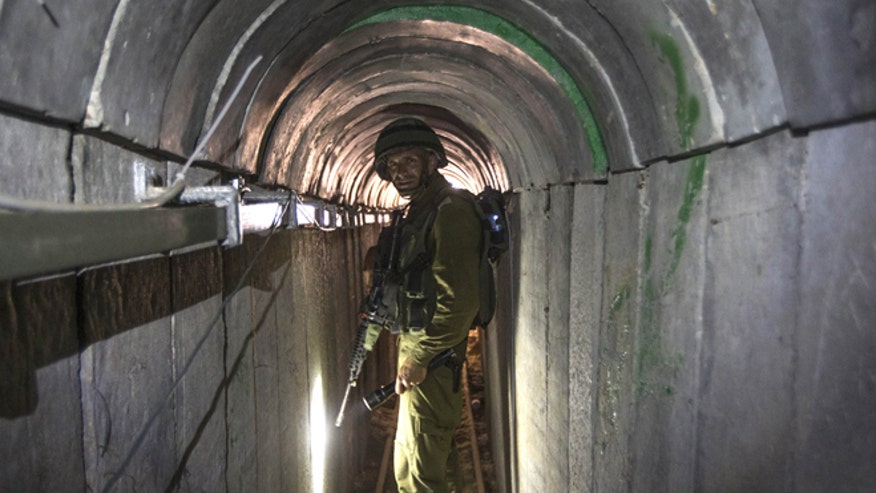 July 25, 2014: In this file photo, an Israeli army officer gives journalists a tour of a tunnel allegedly used by Palestinian militants for cross-border attacks, at the Israel-Gaza Border. (AP)

Hamas reportedly has been executing tunnel diggers out of fear that they will reveal secrets to Israel’s military, which has been on a mission to destroy the militant group’s sophisticated network underneath Gaza.

A report on Israel’s Walla news site said many of the tunnel diggers employed by Hamas worked shifts of up to 24 hours long — often under coercion — and were paid $150-300 a month for their services, according to the Algemeiner.

“They would take some 100 men in trucks, their eyes blindfolded so that they could not know the accurate location of the tunnel entries,” a Gaza source familiar with the tunnel digging told Walla. “Hamas were fearful that one of them was collaborating with Israel.”

An unnamed collaborator with Israel who made it out of Gaza said Hamas frisked workers for electronic recording and monitoring devices.

“Hamas knows that Israel is monitoring them and doesn’t want to take any risks. They go through their clothing to check for tracking devices,” the collaborator told Walla, according to the Algemeiner. “Hamas operatives in charge are masked. No one knows them by their real name.”

The Gaza source said anyone suspected of providing information to Israel is killed, including some workers who were in contact with Israeli civilians who they knew from their time as construction workers in Israel.