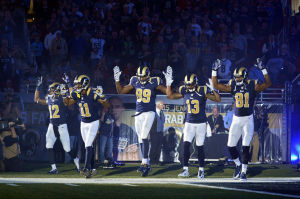 St. Louis Rams football players Tavon Austin, Stedman Bailey, Kenny Britt, Chris Givens, and Jared Cook walked out of the tunnel with their hands up during team introductions before their game with the Oakland Raiders Sunday in a “don’t shoot” gesture in support of the protesters in the Michael Brown case.

Apparently denying a mountain of evidence PROVING that Officer Darren Wilson shot Michael Brown in self defense, and video surveillance, as well as eyewitness testimony proving that Michael Brown was a thief and a violent thug, the crybaby, racist millionaires, I mean Rams players, are still intent on pushing the leftist narrative that Michael Brown was just a gentle giant, an innocent teenager, victimized and brutally murdered by a white racist police officer.

Never mind that the “hands up, don’t shoot” fable perpetrated by a few who claimed to have been eyewitnesses to the incident has been proven completely erroneous by physical evidence, three independent autopsy reports, and many conflicting eyewitness reports. The St. Louis Rams, are going to tow the liberal, racist line and parrot a false narrative that could have landed an innocent man in prison. Immoral is the kindest word I can think of to describe this despicable behavior!

Roger Goodell and the NFL should suspend these five players for at least the remainder of the season, with loss of pay, for inciting racial hatred.