If you are a gun owner, then you know that traveling with your weapon outside your home state can get complicated. In fact you could face jail time, a fine and/or confiscation of your weapon. This is due to the “patchwork” of laws in the various states, most of which have little to do with public safety and are mainly meant to make it hard, if not impossible to insure the safety of your family and yourself.

But all that could shortly change thanks to a new congressional bill that is currently working its way to President Trump’s desk. Under its provisions, it would allow any legal gun owner with a valid concealed carry permit in their home states to exercise that right in any other state that does not expressly prohibit concealed carry within their state boundaries.

As Senator John Cornyn, Republican of Texas said last month when introducing the bill, “Our Second Amendment right doesn’t disappear when we cross state lines.” While some, especially those on left would argue this point, the fact is that every other right in the Constitution follows us where ever we go, so why should the one that is arguably the most important stop at an imaginary line?

Cornyn’s bill, dubbed the “Concealed Carry Reciprocity Act of 2017” is aimed at allowing legal gun owners to carry concealed firearms “freely between states without worrying about conflicting state codes or onerous civil suits,” he said. Not surprisingly the National Rifle Association’s, Chris Cox, supported his position saying: “confusing and conflicting state laws can ensnare law-abiding gun owners. The current patchwork of state and local gun laws is confusing and can cause the most conscientious and law-abiding gun owner to run afoul of the law when they are traveling or temporarily living away from home.”

While the proposed law is not perfect, it would not supersede state laws or establish national standards for concealed carry, it would simplify the process for gun owners and pave the way for later efforts in that direction. A companion bill in the House of Representatives was introduced by Rep. Richard Hudson, R-N.C.

Already, there are 40 states that offer some form of reciprocity with other states. But of course, liberal critics claim reciprocity laws will undercut states that believe public safety is linked to strict gun control. Translation, states controlled by liberals that still push the narrative of “People don’t kill People, Guns do” are just as opposed to the new legislation as ever. 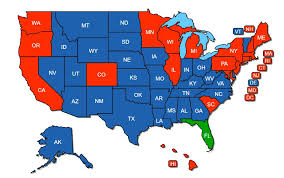 “Reciprocity would have a profound impact on state public safety, making the state with the weakest standards into the law of the land, and letting criminals and other dangerous people carry concealed guns in every state in the country,” the gun control group Every Town for Gun Safety said in a statement. Of course, what they don’t say is that the three states with the highest number of illegal gun carriers are also the three states that have the highest number of shootings and strictest laws against possession of a firearm. New York, Illinois and Califonia along with the District of Columbia account for less than five percent of legal Concealed Carry, but are responsible for over 25% of all shootings in the nation.