Milwaukee County Sheriff David Clarke has announced that he wants to deputize sheriffs in Wisconsin to work with federal officials to help identify and deport criminal illegal aliens.  Needless to say the criminal illegal aliens didn’t take to that and decided to march against the sheriff.  Thousands were bused from throughout the state to join in the protest.

They only stopped to pick up drinks and snacks with their EBT cards, as they talked on their free Obama phones.  City police blocked off streets to make it easier on the protesters who did to their credit keep it peaceful and no arrests were made.

And true to his nature, Sheriff Clarke issued a classic statement to the protesters:

‘Please accept my regrets. I will be working with agents from immigration and customs enforcement helping them identify criminal illegal aliens and therefore cannot attend your rally being held for me’.

‘This country’s greatest strength is its immigrants’

Gee, and I thought our greatest strength was Americans.  What an asinine statement by Abele.  When we deport all the aliens, maybe we can convince him to follow them.  Better yet, why not offer a $5,000 dollar bonus to any deported illegal alien if they tuck a liberal under each arm before returning to their countries.  I’d accept a tax increase to pay for it.

Maria Jasso, 31, said she brought her three children, ages 6, 8 and 9, to the march to learn an important lesson about immigration.

‘We want the president to not do what he wants to do’, Jasso said, speaking about the separation of families when a deportation occurs.

The organizers also included the Coalition for an Inclusive Wisconsin and Muslim community organizations.

The march comes days after Immigration and Customs Enforcement (ICE) agents arrested more than 600 people across at least 11 states in a week, according to The New York Times.

Trump tweeted in response to the raids, saying the targets were ‘illegal criminals’, including ‘gang members’ and ‘drug dealers’. 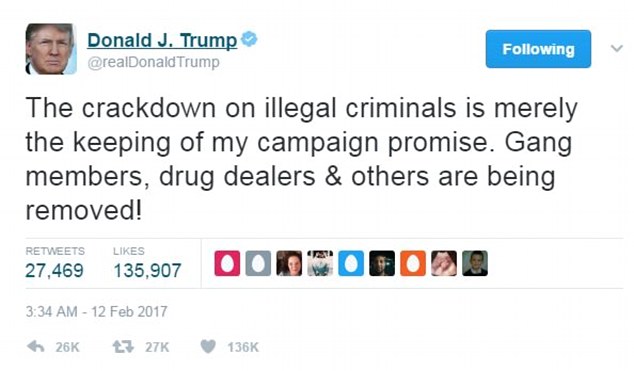