The election of President Trump is sure to go down in both history and the record books. Ever since he announced his run for President, he has broken one record after another and the string of victories just keeps going.

Today he added another giant win in his effort to “Make America Great Again.” Yesterday, the government released the official rate of growth for the American economy during the last year of the Obama administration and lets just say it was not pretty. During the final quarter, Obama managed to keep the American people struggling while the economy grew at the miserable rate of 1.9%, the worst showing in decades. 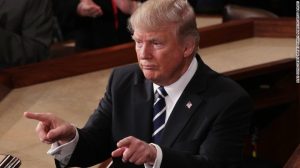 But today, is a new day and with it a new economy. Following the Presidents speech last night, the Dow Jones Industrial Average crossed the 21000 milestone at the opening bell today. Reaching that mark was the one of the fastest 1,000-point advances in the blue-chip index’s history. And it is all because of the optimism on Wall Street which came from President Donald Trump’s first address to a joint session of Congress on Tuesday night a night which saw the President outline the ways he hoped to “Make America great again.”

Mr. Trump said that not only will his his policies include repealing the Affordable Care Act – the desaster forced on the American public by Democrats and President Obama, but a revamping the U.S. tax code, improving trade policies, and requesting Congress approve $1 trillion for infrastructure spending. All items that American business and the American Taxpayers are looking forward too.

While the president’s speech was short on details, it left no doubt that this would be the agenda and that he was prepared to fight for every necessary change he wanted. He put congress on notice that they could either get behind the effort to fix the country or face the wrath of the American people when the next election rolls around. To Democrats, he extended an olive branch and offered them the opportunity to work with the office of the President to fix the problems, or to get out of the way. But he made it clear, this would be done one way or the other. 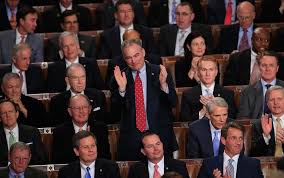 Meanwhile, Democrats sat on their hands and tried to look stoic as Mr. Trump laid out his plans and vision for the next nine years of our nation. So forceful was Mr. Trumps narrative, that at one point, even Tim Kaine, Hillary Clinton’s running mate, was seen applauding the Presidents words. But as expected, Nancy Pelosi sat dressed in white, impassively looking like a 90 year-old vestal virgin with a California lemon stuck in her mouth.

Trump’s surprise November election helped spur confidence both on Wall Street and Main Street that the economy will continue to strengthen with a pro-business president in the White House. Since Nov. 8, the Dow has gained more than 14% while the broader S&P 500 has booked gains of 11%.