Sir Charles Barkley,  the former Philadelphia 76ers star, has opinions and he’s never been afraid to voice them, however unpopular they might be.

NBA star Charles Barkley no doubt lost some fans but also gained a lot more when he said the grand jury got it right when they declined to indict Ferguson, Mo., Police Officer Darren Wilson in the shooting death of Michael Brown and labeled looters “scumbags.” 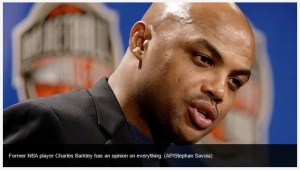 Barkley went on to say that several black witnesses had come forward and corroborated officer Darren Wilson’s version of the incident, stating that Brown attacked him and went for his gun. Barkley also accused the press of using dubious information to inflame passions.

“I can’t believe anything I hear on television anymore,” the former Philadelphia 76er said. “And that’s why I don’t like talking about race issues with the media anymore, because [the media] love this stuff, and lead people to jump to conclusions. The media shouldn’t do that. They never do that when black people kill each other. “

Barkley called those who reacted to the decision by rioting “scumbags.”

Unlike the protesters who have likened police in minority neighborhoods to an occupying force, Barkley said the black community owes a debt of gratitude to the police force.

“They aren’t real black people,” he bluntly stated, according to MRC. “They are all scumbags.”

Barkley has always spoke his mind, oftentimes going against what’s considered as ‘popular’. In 2013, Barkley said he agreed with the acquittal of George Zimmerman in the shooting of Trayvon Martin in Sanford, Fla., in another case that inflamed racial tensions.

Queue the comments from the liberal left on how Barkley is an ‘uncle Tom’ or ‘sell out’ because he’s talking sense while so many others are instigating or encouraging the rioting nonsense.