Seven women are accusing a Utah Democratic Party chair candidate of sexual misconduct, including kissing two women without permission and showing others his underwear.

Rob Miller, who has formerly served as the state party’s vice chair and treasurer, has said the allegations are false and claimed the letter is a form of political sabotage ahead of the June 17 convention, where the party chair will be elected.

‘There’s not any merit to it. There is no sexual harassment,’ Miller told the Salt Lake Tribune.

The letter, which is dated May 25, was sent to the state Democratic Party Executive Committee, according to Fox 13.

It outlines eight allegations against Miller that they say he committed at official party events or meetings.

According to the seven women who signed the letter, Miller kissed two women without permission, stroked and ‘petted’ a woman, told one woman she was ‘sexy’, and showed another woman his undergarments and grabbed her buttocks several times without her permission.

The women claim that in February he hugged another woman too tightly, in March he let his hand drape over her breast as she turned away from him and in April he made a sexual innuendo towards her.

He also ‘walked towards three men and one of the signees in the basement of the former Democratic State headquarters, his pants pulled down to his knees with his garments in full view,’ according to the letter.

Miller is also accused of planning a meeting to discuss a job opportunity and potential contract in 2014, though he did not have work for the woman and instead asked her to date him.

According to the letter, ‘he said he would “treat you like a queen” and feed her “lobster every night”. He told her he was rich and that he would take care of her for the rest of her life.

‘The woman was very disturbed and distressed by Mr Miller’s inappropriate behavior and did not know how to handle it.’

Miller has denied those claims – with the exception of two of the allegations, only he says they didn’t happen the way the letter states.
‘They’ve taken a lot of things and tried to twist it,’ Miller told Fox 13. 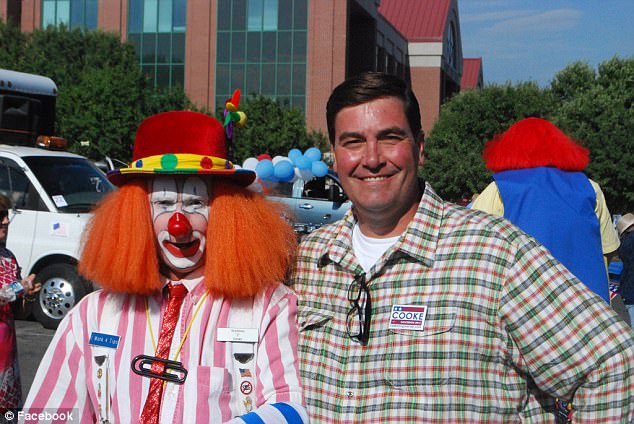 Miller denies the claims, saying that only two of the allegations are true, but even those have been misrepresented by the letter that the seven women signed and sent to the state Democratic Party Executive Committee

He told the outlet that he did hug a woman in February, but he claims she initiated the hug.

He also admitted to asking out the woman he invited to discuss work. He said he asked her out at the end of their conversation about the potential job opportunity, adding that they were both single at the time.

‘She didn’t respond to it, and I never looked back,’ he told the outlet.

Miller served on the executive committee of the state Democratic party for eight years. According to his website, he has three children from his first marriage and a fourth child with his ‘companion’ Andrea Ibanez.

In the letter, the woman allege Miller also threatened two of them with legal action, once over the phone and once in writing.

Six of the women who signed the letter are part of the Democratic party and one woman, Jill Haring, is a Republican married to a Democratic blogger.

Sheryl Ginsberg and Ellen Brady are former national delegates and Jennifer Miller-Smith is a self-described party super-volunteer, according to the Salt Lake Tribune.

Miller said that most of the women are supporters of Nadia Bowman, another candidate for the position of Utah’s Democratic Party chair, the Tribune reported.

‘I had been warned time and again she plays dirty politics,’ Miller told the outlet.

Bowman responded that she had nothing to do with the letter, adding: ‘I do not engage in dirty politics.’

She said that while some of the women who signed the letter have endorsed her, they have not worked on her campaign, according to the Tribune.

Miller told the outlet that even if he is able to prove the allegations aren’t true, ‘this will affect the race’.

So it’s a political witch hunt, even though six of the seven women are Democrats?  That’s going to be difficult to prove.