Now that the left is back in the office they can continue their onslaught of liberal policies to destroy America once and for all. That has been evident in the last couple of months, where the Biden administration has essentially overturned all of former President Trump’s policies that were in place to protect us in favor of helping illegals and foreign countries that hate us.

Between that and the Biden administration’s “welcome to all so come on in” sign at our border for illegals to flood over it makes you wonder how much more we can take. Of course, the mainstream media is attempting to make it appear that these are just poor refugees coming into the country needing sanctuary, but we all know that is not the case.

While left-wing advocates like to portray the flooding of migrants at the border as if it is a spontaneous phenomenon, there are actually countless special interest groups and NGOs that are pushing this invasion as part of a globalist political agenda.

That was made abundantly clear when a group of third-world migrants was pictured holding flight instructions at an airport in McAllen, Tex. as the migrant industry explodes in Biden’s America.

Journalist Jorge Ventura posted pictures of the migrants with their instructions prepared by handlers on social media: 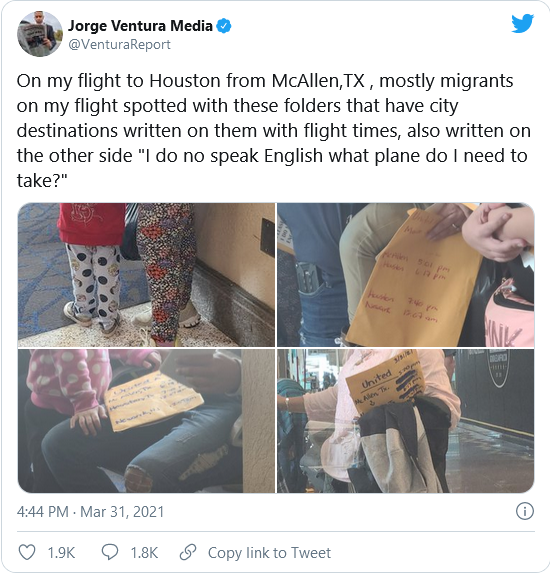 Big League Politics has reported on how the Biden regime is opening up the floodgates for these third-world migrants to further contribute to the decline of the country:

“Border Patrol agents stationed in the Rio Grande Valley in south Texas are describing an avalanche of illegal immigration spurred directly by President Joe Biden’s open borders and enforcement-gutting policies. The arrivals of illegal migrants have considerably increased in numbers in recent weeks, with migrants mostly processed and set free into the country under the Biden administration’s “catch and release” policies.

Even NGO’s that provide assistance to illegal immigrants are openly admitting that the new arrivals exploded after Joe Biden’s inauguration. “For some reason, the day after the inauguration, we had a big influx of people coming,” said Shon Young, the director of the Val Verde Border Humanitarian Coalition, in remarks provided to the Center for Immigration Studies.

The onslaught of illegal immigration had overwhelmed the capabilities of detention facilities, with CBP left with no choice but to release the migrants.

“We are releasing hundreds from many different countries of origin because we simply don’t have enough room to hold them all,” an agent told CIS. “They are being released under what is called an O.R. which means ‘Own Recognizance’ – basically, a promise to arrive for their immigration hearing at some future date. We can’t hold them because they are crossing all day long in groups of 20 to 40, men, women, children.”

Many groups of migrants are arriving from uncommon countries of origin such as Haiti. Biden had even gone so far as to order ICE to release all migrants detained in immigration detention facilities, and the overflow of migrants into the country after the jailbreak establishes a state of open borders in the United States.”

The ongoing migrant invasion is sponsored by the Democrat Party. They will stop at nothing to consolidate power, even if it means putting millions of Americans in danger.