(Natural News) Every virology lab in the world that has run a genomic analysis of the coronavirus now knows that the coronavirus was engineered by human scientists. The proof is in the virus itself: The tools for genetic insertion are still present as remnants in the genetic code. Since these unique gene sequences don’t occur by random chance, they’re proof that this virus was engineered by scientists in a lab.

But the WHO and CDC are covering up this inconvenient fact in order to protect communist China and its biological weapons program, since no government wants the public to know the full truth about how frequently government-run labs experience outbreaks. Decades ago, for example, the U.S. Army ran an Ebola bioweapons lab in the United States, where a monkey infected one of the scientists there. The strain turned out to be infectious only in monkeys, not humans, so the world dodged a bullet, but the U.S. Army “nuked” the entire facility with chemical bombs, killing all the monkeys and wiping out any last remnant of the virus on U.S. soil.

You can read the full details of that incident in the book The Hot Zone by Richard Preston. We’ve also covered it at NaturalNews.com, where this book description is reprinted:

In 1989, Reston, VA — one of the most famous U.S. planned communities located about 10 miles from Washington DC — stood at the epicenter of a potential biological disaster. This well-known story was narrated by Richard Preston in a bone chilling account related to the recognition and containment of a devastating tropical filovirus at a monkey facility — the Reston Primate Quarantine Unit.

That outbreak occurred because Ebola was found to be spreading through the air ducts, confirming that Ebola can spread through the air. This simple fact was vigorously covered up by the entire medical establishment during the Ebola scare in the United States many years later, where the CDC transported an infected patient to a hospital in Dallas, subsequently infecting a nurse who was treated with highly toxic chemicals that caused permanent kidney damage (she later sued the hospital for the damage she suffered).

The reason this is relevant is because in order to understand the coronavirus situation in China, we must first realize that virology research labs routinely experience lapses in containment. Even the United States has failed to contain deadly viral strains when trying to study them. China’s BSL-4 labs have experienced multiple accidental releases of SARS strains, and this new coronavirus is now confirmed to be an engineered strain that was either used in bioweapons research or vaccine experiments.

The genomic coding in the virus is not natural, in other words. Just as you would never encounter a snake in the desert that’s writing a book containing words and grammatical structure, the genetic sequences now identified in the coronavirus strain are, without question, proof that human engineers have been tinkering with the strain.

How to genetically engineer viruses: the pShuttle vector

One of the tools used to accomplish this genetic engineering is called pShuttle. It’s a genetic tool set that can carry a payload of genes to be inserted into the target virus.

Researchers engaged in genetic engineering can purchase the pShuttle sequence from online retailers such as AddGenes.org, which sells the sequence for $75, shipped in “bacteria as agar stab.” 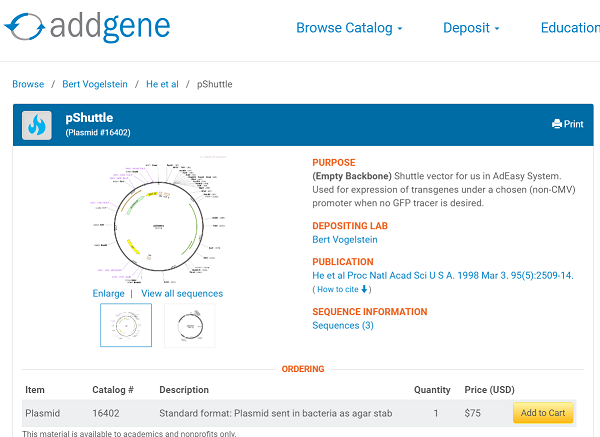 The following map outlines the complete gene sequence of the pShuttle tool: 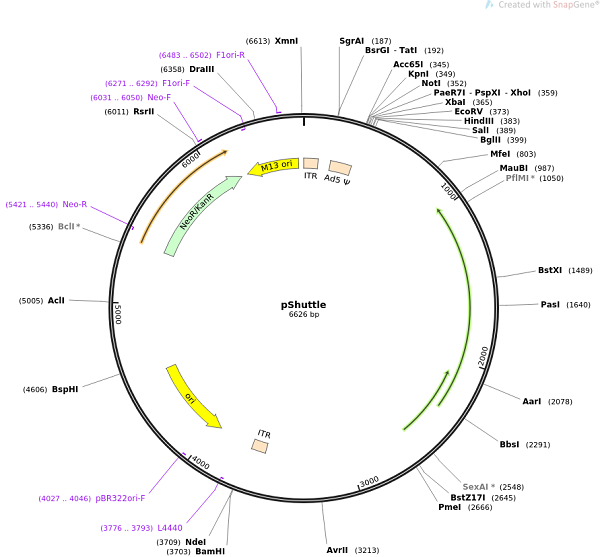 The method for using pShuttle is described in a PubMed document entitled, “A simplified system for generating recombinant adenoviruses.”

The summary of the paper describes, “a strategy that simplifies the generation and production of such viruses.” Here’s how the process works to achieve genetic engineering of viruses:

A recombinant adenoviral plasmid is generated with a minimum of enzymatic manipulations, using homologous recombination in bacteria rather than in eukaryotic cells. After transfections of such plasmids into a mammalian packaging cell line, viral production is conveniently followed with the aid of green fluorescent protein, encoded by a gene incorporated into the viral backbone. Homogeneous viruses can be obtained from this procedure without plaque purification. 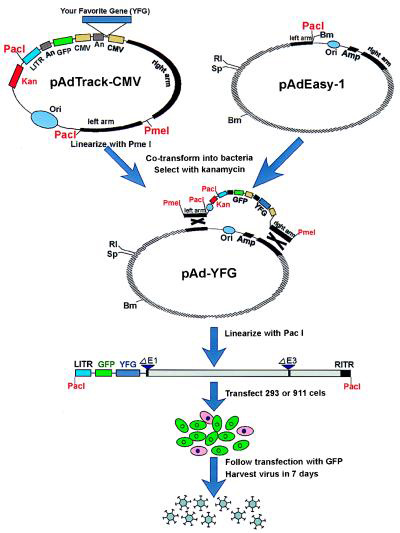 The paper describes how this approach will, “expedite the process of generating and testing recombinant adenoviruses.”