A flyer was circulated before the Trump rally in Richmond, Virginia, urging protesters to use violence.  It didn’t materialize, but in other cities, the call to violence would have been heeded.  I find it hilarious how the liberals claim Trump is dangerous and a clone of Hitler at the same time as the fascists in the democratic party plan violence against fellow voters.  They call voter ID laws as voter suppression and an attempt to throw fear into minorities.  (Incidentally, studies show that states with a voter ID law have seen a sharp increase, not a decrease in minority voters)  At the same time the liberal goons go on TV or attend Trump rallies in order to intimidate his supporters.

The flyer said “Self Defense” with these instructions:

We fully support your right to self-defense, we do not expect you to take a beating by Trump goons in order to “look good.” Your safety is important, protect yourself. Fascism wants us to peacefully resist while it steamrolls us. We take our inspiration from the workers of Spain who rose up by the millions to fight fascism when it came to their country. Passive resistance works in certain situations, but it has no impact on heartless racists. #FUCKTRUMPRVA 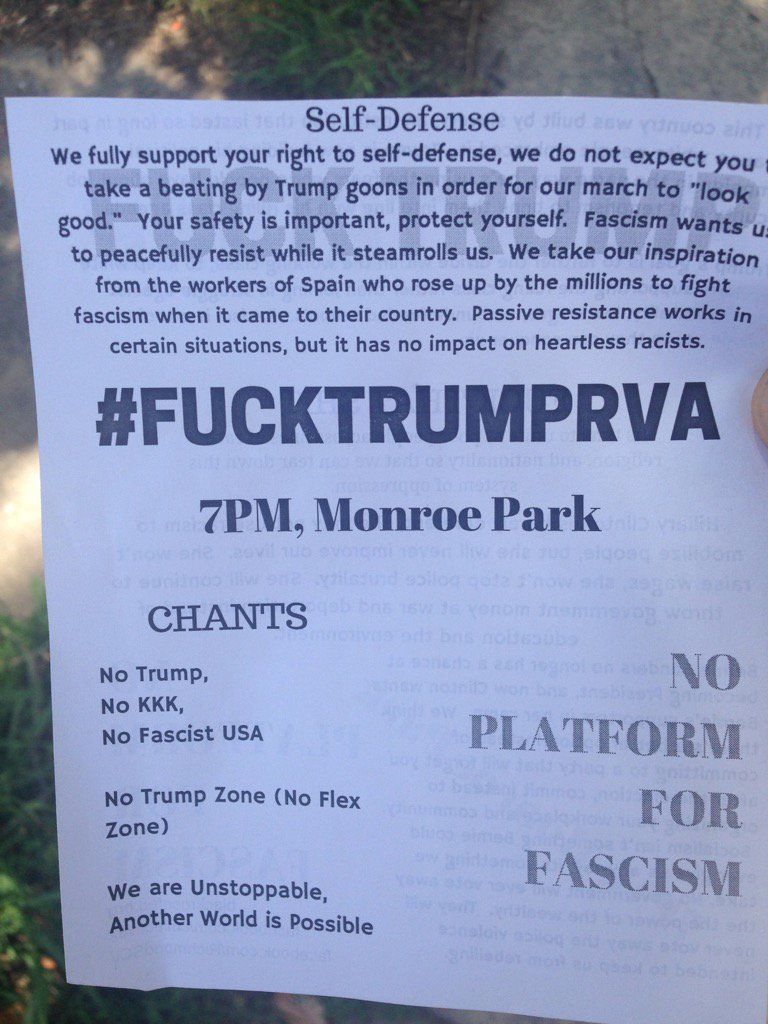 Attendance was lower than it normally would have been because people were afraid that they would be attacked by rabid liberals and if they did fight back, they would have been arrested and not the protesters.  The had seen the beatings that took place in San Jose as the frightened little cops in that city hid behend glass doors a a female Trump supporter was being attacked by a bunch of liberal thugs.

“With that being said, I want to be perfectly clear that we will not allow or tolerate any types of illegal behavior at this event. Police personnel will take swift action and make arrests if they witness any unlawful acts.”

Meanwhile , the ACLU said that they would be planting “observers” in the crowds to try to catch police being overly aggressive (Or at least make videos that can be edited to make it look that way)