Think about the worst day of your life, then multiply it by ten.  In a video discovered by the Daily Mail and LiveLeaks, a man has climbed a high tension electricity tower.  You see orange sparks as the man absorbs 30,000 volts of electricity and then falls 100 feet to the ground.  Then it got crazy.  The man is able to stand up and walk away.  Not unscathed though.  He had severe burns and his skin is pealing, but since by all rights he should have died twice, it ain’t so bad.  When actor Maurice Chevalier turned 80, he was asked what it felt like to turn 80.  He said not bad considering the alternative,

However, the electric shock has left him with severe burns with his skin peeling from his body.

It is unclear exactly where the video was filmed, but it has gone viral since being posted yesterday, and has already been viewed almost 30,000 times.

Commenting on the footage Saeed-George Hourani wrote: ‘It’s like a Tom and Jerry cartoon!’

And Evan Yourkvitch said: ‘I wanna know where he landed tho!! I wish they got a shot of that. S*** is unbelievable.’

Some of those commenting on the video online have also suggested that the man in the second part of the footage is not the same person who fell from the pylon as it would not be possible to walk away from such a fall, but MailOnline has been unable to verify whether or not this is the case. 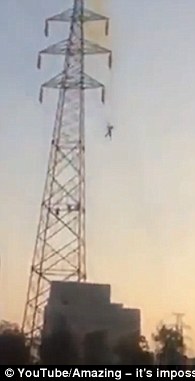 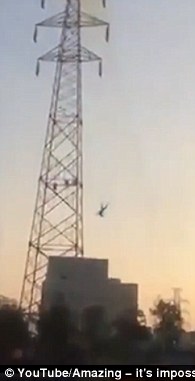 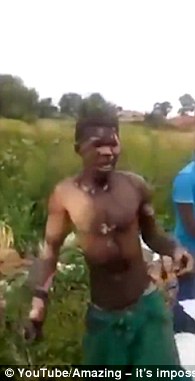