It’s difficult to understand liberals who wanted a green society… before it was a proven concept. They were willing to throw out the current, modern-day technology that is proven before the green technology they wished for was able to take over, and they didn’t care if it threw the rest of us back into the Founding era.

The Obama administration went after the coal industry and liberals were enthralled… that is… until their rising electric bills started coming in. That’s always the point liberals demand something be done, when their own money is at stake, and that’s when liberal politicians rather than rethink what they did that caused costs to skyrocket they come up with silly band-aid patches to soothe the nerves of the complainers until the next problem arises.

The real world says keep current technology in place while working on future alternative energy projects. It’s a win-win for everyone.

The coal industry is poised for a small comeback this year on expectations natural gas prices will rise, according to U.S. Energy Department (DOE) forecasts.

“While U.S. total electricity generation is expected to decline almost 1% this year, the share of coal-fired generation is forecast to increase,” reads a short-term outlook from the Energy Information Administration, which is DOE’s statistical arms.

Coal’s share of electricity generation is expected to increase from 30 percent in 2016 to 31 percent in 2017 before falling again in 2018. The short-term rise and fall of coal-fired electricity is largely driven by changes in natural gas prices.

“After declining for two years in a row, U.S. coal production is set to increase 4% during 2017 due in part to growth in coal-fired electricity generation,” EIA reported. Though coal production could fall again as more coal-fired power plants shut down in the coming years.

It’s good news for President Donald Trump who promised to revive the coal industry by rolling back onerous regulations, but it’s a boom that could be short-lived if fundamental policy shifts don’t happen quickly enough.

The Environmental Protection Agency (EPA) rule is expected to force more coal plants to prematurely retire. Trump is expected to withdraw the rule, which EIA projects could level out coal’s share of electricity production. 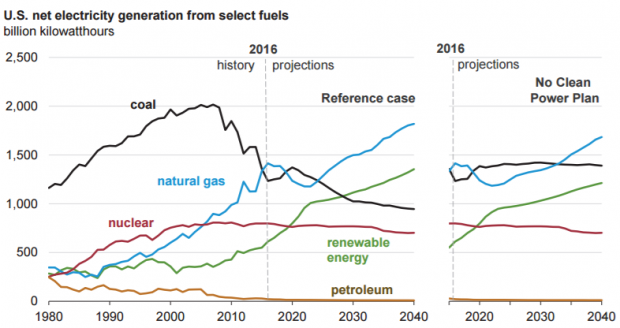 Already, some optimism is seeping back into coal country, though most energy analysts don’t see that many coal mining jobs coming back to regions, like Appalachia where mining costs are higher relative to other mining regions.

Trump recently signed a bill to repeal an Obama-era stream regulation that critics say would have locked up 64 percent of U.S. coal reserves. Coal miners supported the rule’s repeal.

But there’s another problem.

Coal’s demise started before Obama-era climate regulations. The EPA’s 2012 mercury rule, for example, is a major factor behind many coal-fired power plant closures in recent years. 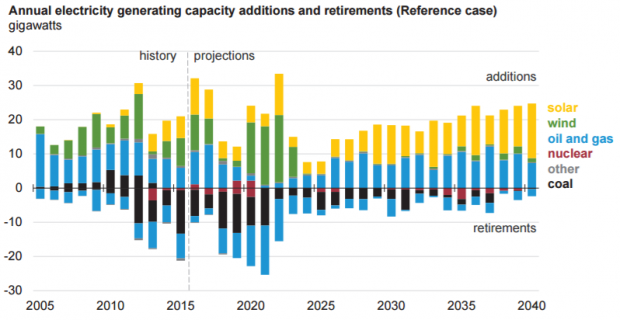