It happened at Disneyland, but really it could happen anywhere. Kristen Quintrall is a liberal California mom who didn’t have any problems with the idea of transgenders picking their bathrooms…until she had a disturbing experience at Disneyland.

In a blog post she was nervous about writing, Qunitrall shares her frightening experience (as reprinted by Life Site News).

“I didn’t know if I was going to write this blog or not. A part of me was scared it’d be shared as some transgender hot piece about yet another homophobic mom lashing out at Disney and then I’d have to deal with the wrath of the internet telling me to kill myself. So let me be clear. This isn’t that story. This is a story about a biological man in the women’s restroom.

“I’ve lived in Los Angeles for over a decade and have seen my fair share of transgender/gender fluid people. They in no way offend me. I’d consider myself pretty progressive and tolerant of most things….But how transgender people feel, how they choose to dress or any surgeries they get, don’t infringe on any parts of my life, so I support their decision to live as they see fit.

“I’ve also seen my fair share of transgender women in the women’s restroom before. Not ALL the time. But over the past few years, I’d say 4-5 that I noticed. Men…who were in some stage of transition and making every attempt to be a woman from mascara to heels. Transgenders who certainly felt comfortable in the women’s room and probably frightened to go into the men’s. At these times, I smiled…I peed…and life went on. But 2 weeks ago something very different happened.

“I was at Disneyland with my son, my friend and her son. We were over in California Adventure in the food court area. We’d just finished eating and decided to pee before we headed out to The Little Mermaid. I went to the bathroom while she watched our boys in their strollers, and then I did the same….

“I was off to the side waiting with the two boys, when I noticed a man walk into the restroom. My first thought was “Oh sh*t, he’s walked in the wrong restroom by mistake. lol” He took a few more steps, at which point he would’ve definitely noticed all the women lined up and still kept walking. My next thought was, “Maybe he’s looking for his wife…or child and they’ve been in here a while.” But he didn’t call out any names or look around.

“He just stood off to the side and leaned up against the wall. At this point I’m like, “[ ] Ok there is definitely a very manly hispanic man in a Lakers jersey who just walked in here. Am I the only one seeing this?” I surveyed the room and saw roughly 12 women, children in tow…staring at him with the exact same look on their faces. Everyone was visibly uncomfortable. We were all trading looks and motioning our eyes over to him…like “what is he doing in here?” Yet every single one of us was silent. And this is the reason I wrote this blog.

“If this had been 5 years ago, you bet you’re a*s every woman in there would’ve been like, “Ummm what are you doing in here?”, but in 2017? the mood has shifted. We had been culturally bullied into silenced. Women were mid-changing their baby’s diapers on the changing tables and I could see them shifting to block his view. But they remained silent. I stayed silent. We all did. Every woman who exited a stall and immediately zeroed right in on him…said nothing. And why? B/c I…and I’m sure all the others were scared of that “what if”. What if I say something and he says he “identifies as a woman” and then I come off as the intolerant a*shole….?

“So we all stood there, shifting in our uncomfortableness…trading looks. I saw two women leave the line with their children. Still nothing was said. An older lady said to me out loud, “What is he doing in here?” I’m ashamed to admit I silently shrugged and mouthed, “I don’t know.” She immediately walked out…from a bathroom she had every right to use without fear.

“So there lingered this unspoken doubt everyone had….that .00001% chance this wasn’t a man. Let me be clear. This was totally a man. If this wasn’t a man, this was a woman who had fully transitioned via surgery and hormones into a man and had also gotten an adam’s apple implant, chest hair and size 9-10 shoes ….and at that point, what are you doing in the women’s restroom?

“And let me be clear, my problem wasn’t JUST that there was a man in the restroom. Its that he wasn’t even peeing, washing his hands or doing anything else that you’d do in a restroom. He was just standing off to the side looking smug…untouchable… doing absolutely nothing. He had to of noticed that every woman in the long line was staring at him. He didn’t care. He then did a lap around the restroom walking by all the stalls. You know, the stalls that have 1 inch gaps by all the doors hinges so you can most definitely see everyone with their pants around their ankles…..

“So here I am…writing this blog, because honestly I need answers. We can’t leave this situation ambiguous any more. The gender debate needs to be addressed….and quickly. There have to be guidelines. It can’t just be a feeling. I’m sorry. I wish it could, but it can’t. I’m fine going by “if it looks like a duck, quacks like a duck…it’s a duck.”…But this notion that we’re shamed into silence b/c we might offend someone, has gone too far.

“There was a man in the bathroom. Not transgender. There was a man who felt entitled to be in the woman restroom, because he knew no one would say anything. There were 20-25 people by the time I left, who were scared and uncomfortable by his ominous presence. And the only thing stopping us, was our fear of political correctness and that the media has told us we don’t know what gender is anymore. I never want to be in the position again. Im not asking for permission to tell transgender people to get out my bathroom. I need to know it’s ok to tell a man, who looks like a man, to get [ ] out. Gender just can’t be a feeling. There has to be science to it. DNA, genitals, amount of Sephora make up on your face, pick your poison, but as a very progressive woman…I’m sorry it can’t just be a feeling when theres but a mere suggestion of a door with a peep hole separating your eyes from my vagina or my children’s genitals.”

And maybe the most succinct, powerful part is Quintrall’s closing remarks:
*Why did you even write this? What are you asking for besides clicks to your dumb mom blog?” Gender must be clearly defined to keep women safe. We can not tell women they don’t know what a man is anymore. We can not coddle this small fraction of people (people who are men, “identify as women”, but have made no external attempt to show that) at the risk of women and children everywhere. The wrong men will take advantage of this loophole and put others in danger. My situation wasn’t dire, but for others it could be. We can not put doubt in women’s minds regarding their ability to recognize and identify a man. In a world where 99.9% of sexual assault is done by men, we must to have the right to “assume someone’s gender”. And I will not waiver in that stance.”

Remember when the whole transgender bathroom uproar happened in North Carolina when they came out with their transgender bathroom law and progressives across the country, not unlike how this woman describes herself, attacked anyone who wanted to protect the women and children there from perverted men who they knew would take advantage of people’s good will? 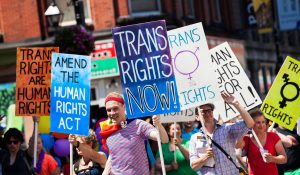 Remember when people like this woman called the rest of us bigots and homophobes and every other progressive insult you can think of?

Remember when progressives made it all the rage for businesses to pull out of North Carolina and sports entertainment groups to cancel events already planned there?

Well, for people like her, next time, before you get on Outrage, the progressive race horse, try listening to the arguments being made from the other side.  Progressives normally root for anything that will destroy the American system and replace it with a utopian heaven on earth.  It’s such a knee jerk reaction that most of them don’t take the time to engage the other side, see what their arguments are all about.

It’s dopey progressives who are destroying this country a little bit more every day of the year. And in typical progressive fashion, instead of rethinking the whole transgender bathroom thing all together, this one wants to figure out a way to get into the mind of the person who is currently offending them, and impossible task, rather than tell a human being born with a penis that he has to use the men’s restroom.

This is what happens when a country elects a community organizer as president.  It was the efforts of Barack Obama that brought us to this stage, including mandating transgender bathroom guidance for our public schools.