With the current presidential race among millionaires and billionaires like Donald Trump and Hillary Clinton, most people find themselves refreshed with more modest contenders like Bernie Sanders. Sanders, a self-described “Democratic Socialist,” has made income inequality the primary issue of his campaign, claiming it is the great “moral injustice” of the 21st century. However, although he portrays himself as of average income, tax reports indicate that Sanders and his wife Jane could be wealthier than they’d like to admit — by a lot.

Politico reports that although most of the wealth is listed in Jane Sanders’ name, “according to campaign spokesman Michael Briggs, the senator owns at least two homes, one in Vermont and one on Capitol Hill.”  Both are listed as “joint real estate.” On top of that, Sanders’ wife indicated that the couple owned a condo at one point, which no doubt further inflates their value, most likely by hundreds of thousands at least.

What’s even stranger is that Sanders disclosed “over $50 million” in publicly traded assets and unearned income” on his financial form for the calendar year 2007. This raises questions — it’s a mistake not easily made when filling out a tax form. This does not indicate Sanders has $50 million, mind you, but it does indicate that he either counted his campaign for Senate as unearned income, made a significant typo, or something more suspicious is occurring.

Even if Sanders is only worth around $450k, his net worth has risen substantially throughout the past decade — by over 200% in total, or 29% annually. This makes Sanders way better off financially than most Americans, many of whom have seen their net worth shrink or barely grow when compared to the senator’s. 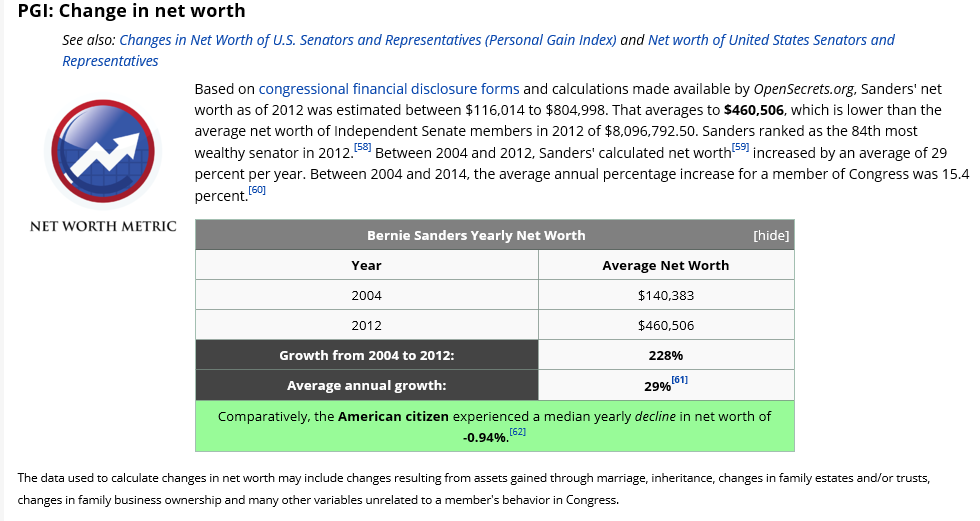 It is possible Sanders is not a millionaire or even wealthy, and it is completely possible that the $50 million in unearned income was simply a typo. Regardless, the red flags are present, and Sanders has seen his wealth increase dramatically compared to most Americans while serving in the U.S. Senate.