If you are like me and millions of other Americans, you love the taste of the Kit Kat bar.  Since it’s inception the candy bar has been loved by kids and grownups alike.  Not only are they delicious but they are fun to eat.  But have you ever wondered what goes into the wafer part of the candy?  The BBB 9British Broadcasting Company) did a documentary, where they got the answer to that question and you will likely be very surprised.

Gregg Wallace of the BBC went behind the scenes to find out.  He asked a presenter what happens to all the broken bits of candy.He was told that the scraps go to rework, where they are crushed so that they become the filler for the candy bar. 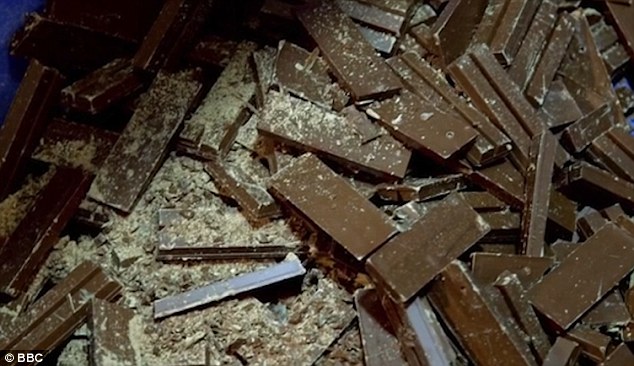 Todd Roy added: ‘The inside a Kit-Kat bar is crushed up Kit-Kat bars which makes you wonder how the first Kit-Kat bar was ever made.’

Gregg also learned how a unique, custom-made topping is produced especially for Kit Kats, as its manufacturer believes that using a regular milk chocolate ‘wouldn’t work.’

After the wafers are cut to size and then dropped into moulds full of melted chocolate, the final layer of chocolate is then drizzled on top.

‘That’s a beautiful thing,’ says Gregg. ‘That’s like a chocolate tide crashing into a beach.’

Touted by Nestlé as ‘the UK’s number one biscuit, Kit Kat was launched in the 1930s in a two- and four-finger format.

The snack now comes in milk, mint, orange, dark, cookies & cream and toffee treat varieties, with its manufacturer boasting they they sell enough two-finger Kit Kats each year to go around the world more than one and a half times.