The People’s Liberation Army took control when the Chinese Communist Party subjugated mainland China in 1949. The Continental Academy of Sciences, also founded by the Imperial Japanese Army in Manchuria.

Veterinary research and military horse healthcare were used as covers to hide the true purpose of the Manchurian facilities and the study and production of biological weapons, according to the memoirs of the Japanese Kwantung Army.

It seems that the study and production of biological weapons the modus operandi of the Imperial Japanese Army and not only its resources.

In 1953, the five People’s Liberation Army Veterinary Universities in China were merged into a single large institution in Changchun, a mere 140 miles south of the former location of Unit 731.

In parallel and like its Imperial Japanese Army namesake, “Warhorse Health Institutes” or similar centers were established in Beijing, Chengdu, Guangzhou, Nanjing and Yunnan, roughly corresponding with the regional military commands.

The veterinary research network presented here, led by the People’s Liberation Army and supervised by the Chinese Academy of Military Medical Sciences, is the core command and control element for China’s biowarfare program.

Two military veterinarians, Xianzhu Xia and Ningyi Jin, provide the leadership. They are both members of the Academic Advisory Committee of the Chinese Academy of Medical Sciences and work together at the Institute of Military Veterinary Research and the Institute of Zoonotic Diseases in Changchun. 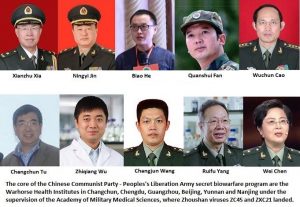 At least four associates of Xianzhu Xia and Ningyi Jin have been engaged in a massive domestic and international virus collection effort for over eight years: Biao He, Quanshui Fan, Changchun Tu, and Zhiqiang Wu.

Senior People’s Liberation Army officers Wuchun Cao, Ruifu Yang, and Wei Chen are believed to be involved in the supervision of the program as members of the Academy of Military Medical Sciences in Beijing.

Biao He, together with Changjun Wang of the Third Military Medical University in Chongqing, played a key role in the isolation of ZC45 and ZXC21, bat coronaviruses claimed by Chinese whistleblower Dr. Li-Meng Yan to be the viral backbones for COVID-19.

About the time the U.S. soldier-athletes were being exposed to the virus, a diversionary release of COVID-19 inside Wuhan would provide a natural explanation to counter-accusations about the use of a biological weapon.

Although the attack on the U.S. soldier-athletes failed, the Wuhan release spread, with the number of infections accelerating by the end of November 2019.

Having failed in its initial direct action against U.S. military personnel and facing catastrophic pandemic effects inside China, the leadership in Beijing lied about the danger and allowed COVID-19 to spread globally through commercial travel.