He was trying to drive from one side of Australia to the other.

Australian police have arrested a 12-year-old boy who was attempting to drive 2,500 miles across the country through the country’s remote outback region.

A police statement on Sunday said that the boy, who did not have a driving license, was picked up near a remote mining town called Broken Hill, New South Wales, on Saturday, the Australian Associated Press reported.

The boy, who has not been named, had already driven 800 miles from his home in Kendall, on Australia’s east coast, and was almost a third of the way through his solo journey to Perth on the other side of the country.

The boy had made it about a third of the way through his planned 4000km journey to the other side of Australia when he was pulled over on the Barrier Highway after police noticed his car’s bumper was dragging along the road.

“Officers from Broken Hill highway patrol stopped a motor vehicle on the Barrier Highway due to defects which made the vehicle hazardous.” 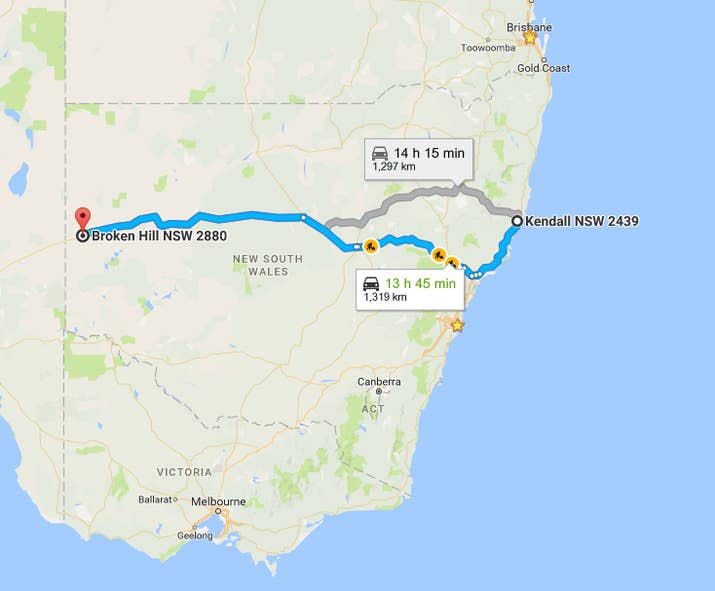 Detective Inspector Kim Fehon said that the boy had taken his family car and had been reported missing by his parents immediately after he left his home on Friday morning.

Fehon said that the boy appeared to have had an accident while driving; traffic officers stopped the car after noticing that its bumper was dragging along the road.

Police took the boy to Broken Hill station, from where he was released to his parents. He is likely to be questioned by local detectives when he returns home to Kendall. He may be charged under the Young Offenders Act with three offenses: illegal driving, failing to pay for gas and driving without a license, police said. Drivers need to be a minimum of 16 years old to gain a license in New South Wales.

Fehon dismissed praise for the boy on social media, saying he had put himself and others at risk.

“Not only was the child’s life at risk, but all the people he went past and came in contact with,” she said.

“He was lucky he had an escape [after the accident]. But so did all the motorists on the way from Kendall to Cobar. They all had a lucky day as well.”