Fishermen around the world are all alike.  It’s not enough that they catch enormous fish.  They feel the urgent need to throw it into your face by forcing you look at it or at least a picture of it.  Even alligators have been known to get into the act.  Norma Respess, who lives in Tampa was able to video tape a large alligator with a very large fish in it’s mouth as it makes it’s way into a nearby water hazard.

I haven’t fished for years, but even so I feel like Ms Respess should have given me a trigger warning and a map to the closest safe spaces, so that I would have to experience extreme jealousy.  I’ve been fish shamed.  And to make matters worse, my old folk’s home does not provide us with psychologists to help us get over our feelings of jealousy and angst.

Norma Respess lives in Tampa and now has her own ‘golf course gator’ story after she spotted one walking across the green with a huge fish clamped in it’s mouth.

She watched along with other stunned golfers as the alligator waltzed across the cart-path at Seven Springs Golf Club and into a water hazard.

Respess posted a video showing just this to her Facebook page, and can be heard making comments in the background.

‘That’s amazing, I’ve never seen that before,’ she can be heard saying behind the camera.

‘I’m glad you got the fish and not me,’ she said as the gator entered the water hazard and disappeared from view. 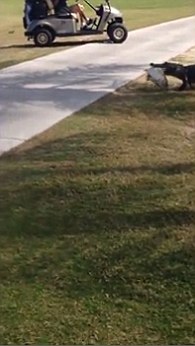 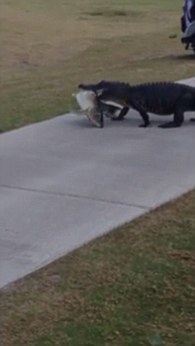 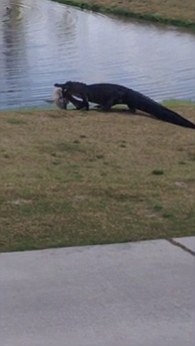