Alan Colmes was a man who would drive you nuts with his political rhetoric, but he was such a nice, funny and likable guy you would forget he was a left wing loon with his politics… most of the time.

Alan was a different kind of liberal.  He strongly believed in free speech, never tried to shut down the opposition’s viewpoint, and would never shy away from a debate. A lot of people from today’s Left could have learned a lot from Alan, and he will be sorely missed.

Fox News Channel’s Alan Colmes has passed away at age 66 after a brief illness.

Colmes leaves behind his wife, Jocelyn Crowley, who issued the following statement:

Alan Colmes passed away this morning after a brief illness. He was 66-years-old. He leaves his adoring and devoted wife, Jocelyn Elise Crowley. He was a great guy, brilliant, hysterical, and moral. He was fiercely loyal, and the only thing he loved more than his work was his life with Jocelyn. He will be missed. The family has asked for privacy during this very difficult time.

Bill Hemmer announced the sad news this morning on “America’s Newsroom,” which then aired a tribute package from Fox News Channel host Sean Hannity, his former co-host on “Hannity & Colmes.”

In a statement this morning, Hannity called Alan Colmes “one of life’s most decent, kind and wonderful people you’d ever want to meet.”

“When Alan and I started ‘Hannity & Colmes,’ there wasn’t a day that went by where we didn’t say we were the two most fortunate men in all of television,” said Hannity.

Despite their political differences, Hannity said the two “forged a deep friendship” over the years.

“Alan, in the midst of great sickness and illness, showed the single greatest amount of courage I’ve ever seen,” he said.

In the video below, Hannity joined Bill Hemmer to remember his dear friend. 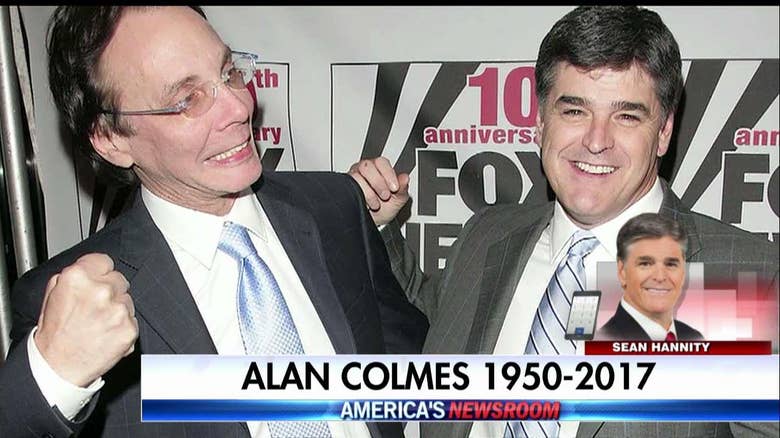 Colmes was known for his electric commentary and for the fierce debates across Fox News programs since the channel’s launch in 1996. “Hannity & Colmes” debuted on Fox News in 1996 and ran until Jan. 2009.

Colmes also hosted the nationally-syndicated “Alan Colmes Show” on Fox News Radio. He addressed his recent absence from the show in a note to listeners on Jan. 30.

“As I previously mentioned on the show last year, there would be times I would be taking off from the show to deal with a medical issue. This is why I’ve been out recently and will be out this week as well. But I will be back taking your calls as soon as I can,” he wrote.

Colmes’ passing comes just days after the death of Fox News Channel’s Brenda Buttner, who died at age 55 after a battle with cancer. Neil Cavuto remembered the “Bulls & Bears” host on his show Monday.

Friends and colleagues are remembering Alan this morning on Twitter…

So sad to hear of the death of Fox News colleague Alan Colmes. He and I agreed on little, but I liked him immensely. Good guy. R.I.P.

Shocked to hear of the passing of Alan Colmes. Thanks for providing great perspective on the stories of the day.

Very sad to report our friend and colleague @AlanColmes has passed away.

I can tell you tears r flowing @FoxBusiness @FoxNews right now. We are all devastated by the loss of kind soul @AlanColmes may god bless RIP

Alan Colmes was an incredibly talented media personality but he was also my friend & a mentor.Saying he will be missed is an understatement.

Goodbye to Alan Colmes, a generous and wonderful man who was the first to fight the good fight on FNC.

Deeply saddened to hear of the passing of my @foxnews colleague @alancolmes. A very nice, genuine man I had the pleasure to work with.

I'm heartbroken. @AlanColmes was my fellow liberal colleague at Fox News. I admired his tenacious work ethic. He was a good man. RIP Alan.

I'm so very sad to learn Alan Colmes has died. A true gentleman and passionate advocate of his beliefs. FNC won't be the same without him.

I am saddened by the passing of Alan Colmes. I always found him to be a really kind colleague. Thoughts & prayers.https://t.co/keZBymYtK7

So sad to hear the news about my friend Alan Colmes. He was a wonderful colleague, kind person and a great debater. He will be missed.

Came to mind reflecting on the passing of Alan Colmes…and the VALUE of strong debate within a team/family/nation: Proverbs 27:17

Alan Colmes was a dear friend and I will miss him and our talks.We spoke every Thanksgiving and Christmas…RIP my friend @FoxNews

Just heard of death of Alan Colmes; the kind of liberal I loved-smart, witty, and fair; never backed up, but always backed up his views. RIP

RIP @AlanColmes. Shock. While is disagreed with him on many things he was a good and decent man. Indeed, all that matters in the end.

Very sad to report our friend and colleague @AlanColmes has passed away. Alan was one nice, happy bright light. RIP AC.

Saddened to hear of the passing of @AlanColmes. I've done his show many times through the years, he was always fair. My prayers 4 his family

Remembering @AlanColmes who passed away at 66, a funny, smart, passionate broadcaster who was beloved by all. Rest In Peace, Alan

Heartbroken about our dear colleague Alan Colmes. The first person to welcome me to @FoxNews always a smile on his face. He'll be so missed.

Very sorry to hear about the death of Alan Colmes. Always enjoyed his political commentary, even when I often disagreed with it. RIP. pic.twitter.com/p1ogj5U2aC

Alan Colmes was a bright, funny, and gracious man who compiled a substantial and valuable body of work as a broadcaster and interviewer. RIP

@CallyGingrich and I extend our deepest sympathy to Alan Colmes family. He was a wonderful friend and colleague. He will be deeply missed.

R.I.P Alan. I was just on his radio show a few weeks ago. From @seanhannity & @AlanColmes-he's been at @FoxNews since the very start https://t.co/zxW1ZABVGD

Heartbroken about the passing of my dear friend & colleague Alan Colmes. The 1st to show me the ropes at @FoxNews. He will be truly missed❤️ pic.twitter.com/BMBSUoRT5R

My dear friend @AlanColmes has died When my Dad died, Alan Took me out to eat every night so I wouldn't b alone. He was kind & generous. RIP

Our friend @AlanColmes has passed. Alan’s kindness and sense of humor will be missed. Here he is on our first show as the “Liberal Panel” pic.twitter.com/mLdQBrB1Mo

Devastated to hear @AlanColmes has passed. Such a sweet soul, always fun to spar with, and always ready to laugh. #RIP