Melody Moon, 25, from Yeovil, Somerset, had broken up with her partner Jamie Mitchell, 27, after he became controlling and violent.

Jamie flew into a jealous rage and decided to attack Melody once he had persuaded her to visit his home to talk things through.

Melody said: “Suddenly Jamie punched me to the ground and wrapped his hands around my throat.”

‘”You’re going to die” he said and dragged me by my hair to the sofa.He said he was going to bite my face so no man would look at me again.

‘As his face came towards mine I realized in disbelief he was sinking his teeth into my skin, biting my cheek, lips and ears.’

Melody was left with a fractured right eye socket, a broken nose and cheekbone, and lacerations all over her body.

She said: ‘Jamie had torn into my face 21 times. It felt like he’d tried to eat me alive.

‘When I saw my reflection I didn’t recognize myself either. I thought Jamie was right, no one will ever look at me again. I looked like a monster.”

Melody was left both physically and mentally scarred by the events recently diagnosed with post-traumatic stress disorder and is being treated for anxiety.

Melody, who works as a chef, first got together with Jamie in August last year having previously attended the same primary school.

She says at first she could see nothing wrong. She explained: ‘He’d been in the year above me and I hadn’t seem him for years.

‘He told me he lived in Yeovil and worked as a chef. He seemed lovely.’

Melody was instantly charmed by the chef when he offered to help her get a job in the gastro pub he worked in which is when the pair began dating. 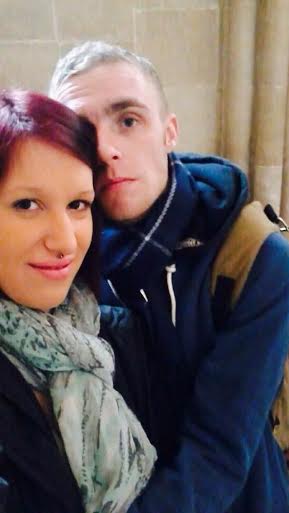 Jamie was given a two-year suspended sentence, and an indefinite restraining order that banned him from making any contact with Melody.

In addition he was made the subject of a mental health order and a 30-day rehabilitation order, and had to attend a ‘building better relationships’ training program.

However, Melody said she felt ‘cheated’ saying that his sentence ‘wasn’t enough’.

Melody says: ‘Seeing the damage Jamie inflicted when I look in the mirror makes me feel disgusted and unattractive.

‘I haven’t been in a relationship since, and can’t imagine getting involved with a guy any time soon.

‘But although Jamie was hell-bent on disfiguring me that day, I’m determined not to let that monster beat me.’