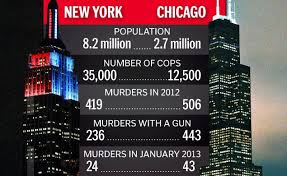 Everyone knows that despite having some of the toughest gun laws in the country, Chicago has more than it’s share of murders.  Currently, the black community is up in arms about a white cop who shot an unarmed black man.  They should be.  But when they say it’s an epidemic, they are far off base.  Let’s see what the numbers tell us:

The first thing we should look at is what percentage of murderers actually make it to trial.  There were 433 homicides last year and only 128 or 29% were prosecuted.  The main victims of the crimes are blacks at 326 or 75.3% of all murders and Hispanics had 82 murders or 18.9%.  That means between blacks and Hispanics 94.2% of all murders were among those groups, while only a relatively few whites were killed (20 or 4.6%).

What about the murderers?  Blacks allegedly killed (These numbers will be lower since the age and race of the perpetrator may be unknown)  Blacks allegedly committed 122 of then at 71.3%.  Hispanics allegedly murdered 42 people at 24.6%.  That makes 94.9%.  That’s very close to the percentage of black and Hispanic victims at 94.2%.

Don Lemon, a black journalist with CNN offered the following advice for Chicago and other big cities:

“Black people, if you really want to fix the problem, here’s just five things that you should think about doing.”

The No. 1 item on that list — ‘and probably the most important,’ he said — had to do with out-of-wedlock births.

“Just because you can have a baby, it doesn’t mean you should.  Especially without planning for one or getting married first. More than 72 percent of children in the African-American community are born out of wedlock. That means absent fathers. And the studies show that lack of a male role model is an express train right to prison and the cycle continues.”

Sure, go after police who murder but don’t worry about a drop, while letting all the water flow over the dam.