A traffic stop turned violent in Alabama when it is alleged Janard Shamar Cunningham attacked the officer who pulled him over, pistol-whipping him unconscious before fleeing the scene.

Cunningham, who has a long rap sheet with six convictions dating back to 1999, was later arrested and charged in the crime. But the real story here is the social media reaction. 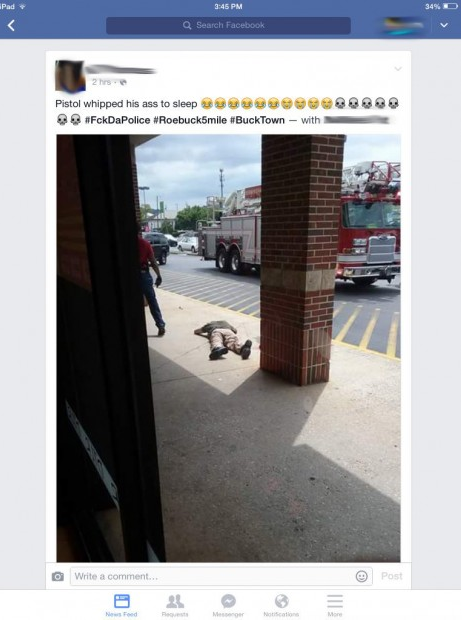 After the officer, a detective, was beaten unconscious, a picture of him laying face down on the group was posted to Facebook. The caption read, “Pistol whipped his ass to sleep” with several emoticons of laughing to tears and skulls, presumably implying death. It also included the hashtag #FckDaPolice.

Not long after the attack, photos began to surface on social media showing the detective lying face down on the pavement. Another photo showed him bloody and kneeling, but awake. In some cases on Facebook, the photos were accompanied by words of support for whoever beat the detective.

Heath Boackle, a sergeant with the Birmingham police and president of the local Fraternal Order of Police, said, “If the tables were turned, and that was a suspect lying there, they would be rioting.”

This weekend is the one year anniversary of the death of Michael Brown in Ferguson, Mo. Brown was killed after attacking officer Darren Wilson and trying to take his gun. The incident was followed by months of protests and waves of media attention which culminated in violent and destructive riots after a grand jury refused to indict Wilson, believing he acted in self-defense.

Boackle continued, “If the officers on the streets were not in fear of losing their jobs, it wouldn’t have gotten to the point it did yesterday. Officers are second-guessing every move because they’re afraid they’re going to be judged, by the media and by the public. If the officer would have shot him, then he would have shot an ‘unarmed man.’ Instead, he took the gun from the officer. The officer had every right to shoot him. We’re lucky we’re not talking about him killing the officer.”

Cunningham, 34, has been charged with attempted murder.