A teacher in Dallas Texas is on administrative leave as the school investigates an 8 second video she made became public after she posted it on Instagram.  She projected a picture of President Trump on the blackboard and she shot it with a water pistol while continually yelling “Die”.

It is not clear if there were students present at the time.  Payal Modi, who teaches art at W. H. Adamson High School in Dallas, Texas, is in real danger of losing her job over the incident.  The problem with unhinged liberal kooks is that they don’t realize they are unhinged liberal kooks.  That leaves them with the impression that their disgusting acts are somehow heroic. 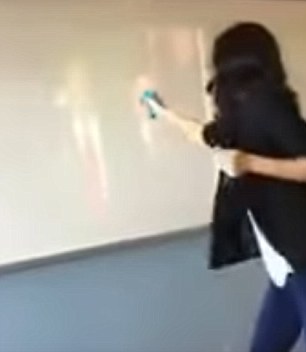 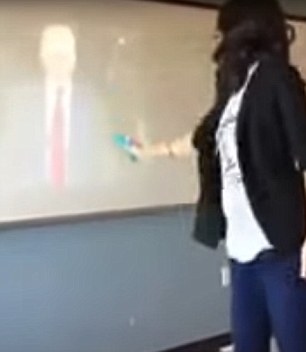 The caption stated: ‘Watching the #inauguration in my classroom like…. #no #stop #denial #squirtgun #hypocrisy #powerless.’

It is unclear whether whether the voices heard in the background were that of her students.

Modi soon drew the attention of critics – and despite changing her Instagram account to private before deleting it entirely, the video continued to circulate on YouTube.

People also rallied against her on social media and circulated the school district’s phone number to encourage people to lodge complaints against her.

The Dallas Independent School District placed Modi on administrative leave and issued a statement that said: ‘Today, we were made aware of a social media posting being circulated involving a teacher at W. H. Adamson High School.

‘The teacher has been placed on administrative leave and the district has opened an investigation. This is a personnel matter and, as such, we cannot comment.’

Public records show Modi was hired by the school district in August 2014.