You’ve got to be on the side of police officers and their safety when they are on the job. But sometimes, when it is perfectly obvious, there’s a better way to handle a situation, it makes it hard to maintain your support. There are bad apples in every bunch and now this one has spurred a law suit

These shocking pictures show the gruesome moment an NYPD cop shot dead a family’s dog in what appears to be an unprovoked attack.

Two police officers were responding to a call at a neighboring apartment in the Bronx when Yvonne Rosado opened her door to see what the commotion was about.

Surveillance footage obtained by the New York Daily News shows her four-year-old pitbull, Spike, wandering out into the hallway and excitedly wagging his tail.

The barking dog – who seems more playful than aggressive – approaches one of the cops, who has already withdrawn his gun.

The spooked police officer backs down the stairwell before opening fire, fatally wounding Spike with a single gunshot to the head. 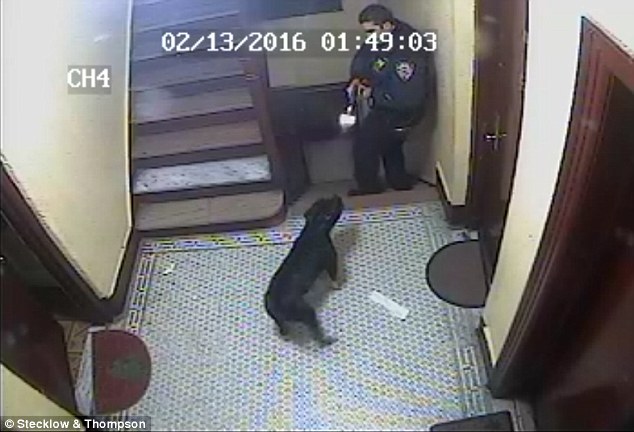 Brutal: These shocking pictures show the gruesome moment a NYPD cop shot dead a family’s dog in what appears to be an unprovoked attack 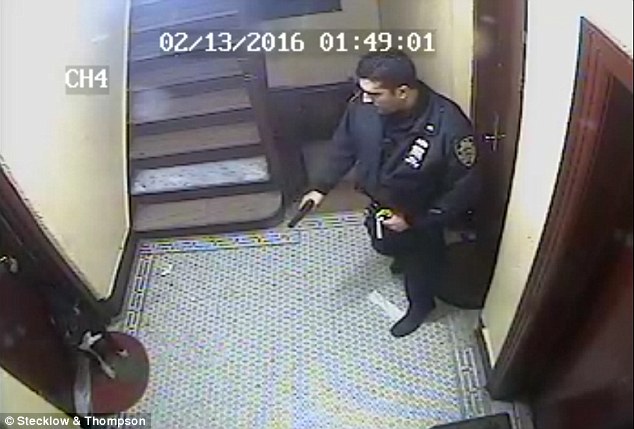 Playful: Surveillance footage shows her four-year-old pitbull Spike wandering out into the hallway and excitedly wagging his tail

The cop, who the NYPD has refused to name, is then seen backing away down the stairs as furious relatives and friends of Ms Rosado stream out of their apartments.

One woman wearing just her underwear stumbles down the stairs and has to be restrained by more police officers as she tries to slap the cop who opened fire on Spike on February 13.

Ms Rosado said: ‘The officer just reacted badly. I was screaming, “He’s friendly! He’s friendly!” But he still did that to my dog.’

She told the Daily News that her beloved pooch was ‘a gentle giant’ and her ‘big snuffleupagas’.

‘He would wag his tail letting everyone know he was friendly,’ she added.

Ms Rosado said the officers have not explained why her dog was killed and that she is yet to receive an apology. 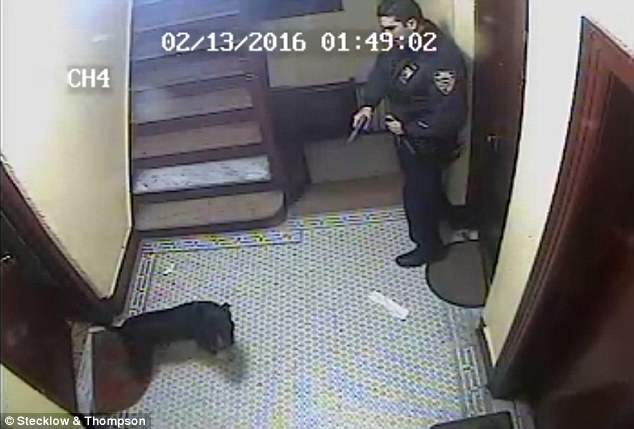 The barking dog – who seems more playful than aggressive – approaches one of the cops, who has already withdrawn his gun 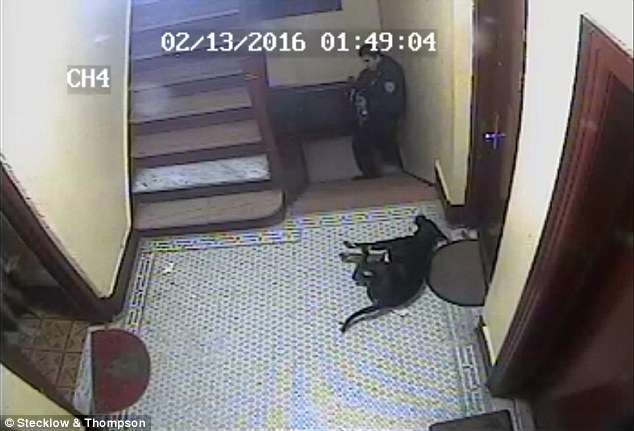 The spooked police officer backs down the stairwell before opening fire, fatally wounding Spike with a single gunshot to the head

The 42 year old has filed a notice of claim concerning a lawsuit against the city of New York and plans to filed an official complaint too.

Neighbor Irma Sue Santiago, 46, said Spike ‘died wagging his tail’, but was also furious that police opened fire so close to her home.

‘What if he had missed the dog and shot my daughter?’ Ms Santiago said. ‘She’s traumatized by the whole thing.’

‘Police officers shall not discharge their firearms at a dog or other animal except to protect themselves or another person from physical injury and there is no other reasonable means to eliminate the threat.’

The mother added that the person police were searching for when they called round at the apartment building in response to a domestic incident had left some time ago.

The police officer who shot dead Spike was taken to hospital to be treated for tinnitus, while Ms Santiago’s 16-year-old daughter Serena – who saw the dog dying in a pool of its own blood – has had to undergo psychiatric therapy to help her deal with the grim scene she encountered.

The NYPD refused to name the police officers involved.

Police spokesman Lieutenant John Grimpel said: ‘The incident is being reviewed by our force investigation division and the findings will be subject to a firearms discharge review board.’