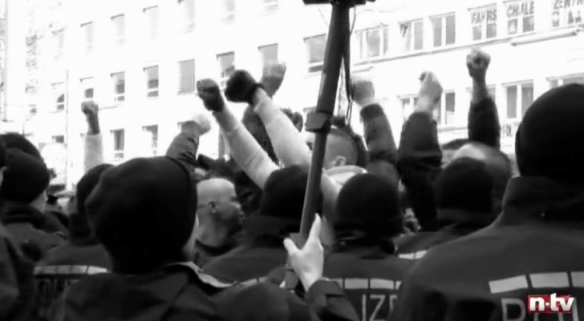 The massive riots on Sunday by Hooligans Against [Muslim] Salafists in Cologne seems to have spread to Dresden were public assembly showed in full force and  plans are on the way for additional massive riots on November 15th planned in Hamburg and at the Brandenburg Gate, the center of the capital of Berlin itself, German media reported.

A member of the group who described himself as a devout Bible believing Christian denounced the false portrayal of the group by leftist media as “Nazi” and told Shoebat.com Monday that “this is only the beginning” vowing that this will spread to Dresden and other places across Germany.

Sure enough, in Dresden yesterday, the group took to the streets under the banner “Patriotic Europeans against the Islamization of the West” (Pegida) against what they termed Muslim “religious wars”.

After the incidents in Cologne it is expected that both the police and counter-demonstrators otherwise prepare for the appointment on November 15th in which the police is preparing for a massive deployment of agents in Berlin to confront the coming unrest especially since leftist and Muslim groups in the city have already announced a showdown of retaliation against the right-wing Hooligans. Germany is expected to witness civil unrest and a line in the sand be drawn between left and right.

While the right to public assembly is settled in German law and banning these demonstrations is quite difficult, leftist politicians hope that the recent violence in Cologne is sufficient to proclaim a ban on the Hooligan’s right to free public assembly.

The messages by the group over the internet regarding the massive event in Cologne says that this was only the beginning, but officials in Berlin are saying that they take the matter very seriously. ”The rule of law must use all means to prevent the militant violence that we have seen in Cologne to repeat itself, ” said CDU Senator Frank Henkel who is calling for a ban on Hooligan demonstrations.

The hooligans against Salafists’ originated on the Internet and at the first big demonstration last Sunday in Cologne quickly came to violent confrontations with the police. Over forty policemen were injured and seventeen arrests were made.

The Facebook page already has 5000 people signed up for the demo in Hamburg and growing.

In Germany  this month a controversy erupted after Muslim Salafists  in bright orange vests started a patrol at the doors of discotheques, cafes and amusement arcades and told people to refrain from drinking alcohol which  sparked new debate on whether Islam should remain in Germany. Muslims with the wordsSharia Police written on the back patrolled the city of Wuppertal in October which also caused an outrage amongst Germans and wondered how to react.

The self-proclaimed guardians of public morals are Salafists who are the fastest growing group of radical Muslims in Germany formed their street police network akin to the Commission for the Promotion of Virtue and Prevention of Vice in Saudi Arabia. The head of the Wuppertal group is German convert Sven Lau, alias Abu Adam.

Ever since, a debate has raged in Germany. “Sharia is not tolerated on German soil,” Interior Minister Thomas de Maizière said, and Justice Minister Heiko Maas warned Germany would not tolerate any form of illegal parallel justice.

The Salafist scene in Germany is rapidly growing, according to Germany’s domestic intelligence chief. Radical Islamists have been adept in recruiting disaffected young Muslim men from families with migrant backgrounds.

Salafism, the most widespread form of Islamist extremism in Germany, calls for a return to the way Muslims lived during the Prophet Mohammed’s era.

And what it seems to be happening in Germany is moving across Europe. (Read our previous report here)Excellent report- must see!