A 26 year old mother from hell left her three month old baby on a bed while she went out on an all night drinking binge.  When she got home, she saw a grizzly scene.  Giant rats had eaten the baby alive. I can’t even imagine such a thing but I can imagine some creative punishments for the mother, including tying her up and placing her on the same bed where her baby died with splotches of honey on various parts of her body.

A neighbor described the scene and said the infants death must have been very painful as her tongue, eyes and fingers had all been eaten.

‘Besides the missing body parts, the remains of her body had bites and wounds all over that were inflicted by the sharp teeth of the rats. This woman must rot in jail.

‘She does not deserve to be a mother.’ 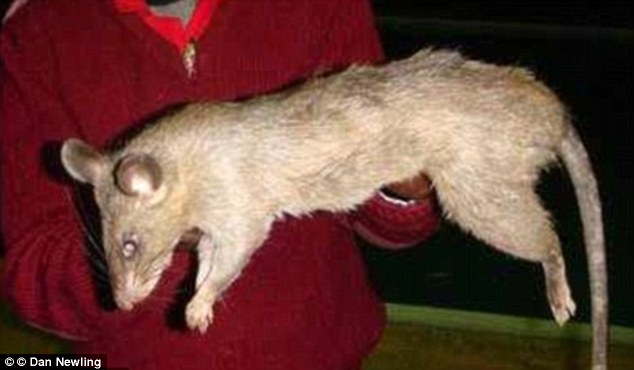 This is a giant rat found in Johannesburg, South Africa

‘She came back in the early hours of the morning with a new boyfriend and they tried to break into the shack since she had lost the key and they found the baby girl dead.

‘They were claiming that the child was burnt.’

The woman’s landlady, Mama Sesi Mtshali, said: ‘We have lots of rats in the area. She leaves the children alone all night long and they cry themselves to sleep. She would not say she left the baby alone.’

The surviving twin is now in the care of his 28-year-old father and his new girlfriend.

The father, who has not been named, said: ‘My ex-girlfriend gave birth to twins a boy and a girl and on Friday she took the boy and left the girl in the shack.

‘When she came back the following morning at about 6.30am the baby girl was dead.’

And his girlfriend said: ‘The mother always comes here drunk and locks the infants inside alone.

Fortunately, the woman took the girl’s twin brother to her sister’s house that night or he would have suffered the same fate.  The woman has been charged with neglect.