OH BOY! This is really gonna stir up the anti-gun rhetoric!

HOUSTON – In The Woodlands, it was all cheers for the presumptive Republican nominee for president.

One way Trump hopes to do that is by eliminating terrorism.

In the wake of the Orlando shooting that left 49 dead, Trump talked about his proposed temporary ban on Muslim immigration and protecting the Second Amendment.

”I’m a big supporter of the Second Amendment. I think we should all have the right to protect ourselves,” Tyler Guillory said.

Supporters say they think his plans will make a change and it’ll happen when he takes the White House.

“He’s there listening to everyone and he wants do what we need him to do so I think he would be great,” Peggy Mundschau said.

A man was taken into custody by police at the Trump rally earlier in the evening.

Sources tell Channel 2 they found him on the fourth floor of the parking garage with a pistol.

He was handcuffed, then sheriff’s deputies took him inside to be questioned.

[VIDEO: WATCH THE MAN BE TAKEN INTO CUSTODY]

About 30 minutes later he was back outside.

The handcuffs were off and he said, in an exclusive interview, that his name is Kenny and it was all a misunderstanding.

“So was it a misunderstanding? What happened?” Bauer asked.

“I can’t say. But make America great again. Trump is going to be our next president,” Kenny said. 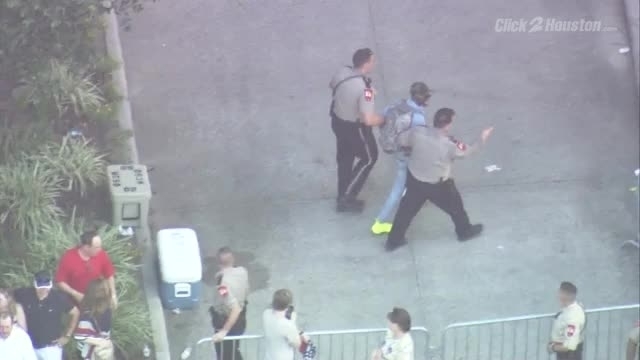 “We’re taking him home to his family,” they said.

It’s still unclear what exactly happened, but he appeared to be going home.

Throughout the evening, there were several incidents involving police. 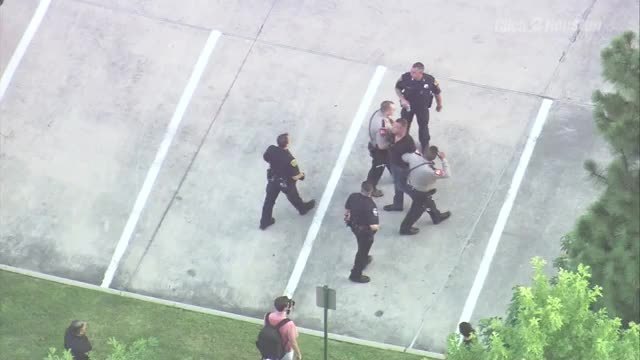 The crowd of protesters was large and loud.

Deputies lined the streets, keeping a close eye on things and making sure it didn’t get out of hand.

Trump landed in Houston this afternoon. His plane touched down at Bush Intercontinental Airport around 3 p.m.

It is a part of his upcoming 9-day, 10-city trip across the country.

KPRC Channel 2’s Anoushah Rasta was there as supporters arrived as early as 9 a.m. to line up.

“We want a future for our kids where there will be a president like Trump who wants to follow the law on immigration reform, the whole ordeal with ISIS and the terrorists,” supporter Sean Jordan said. “We need that taken care of. I’m afraid for my kids.”