Hillary is in desperation mode as she fires off a series of tweets referencing a “secret server” that Trump uses to communicate with Russia.  Who in the hell does she think she’s kidding?

Trump must answer “serious” questions about his ties to Russia. 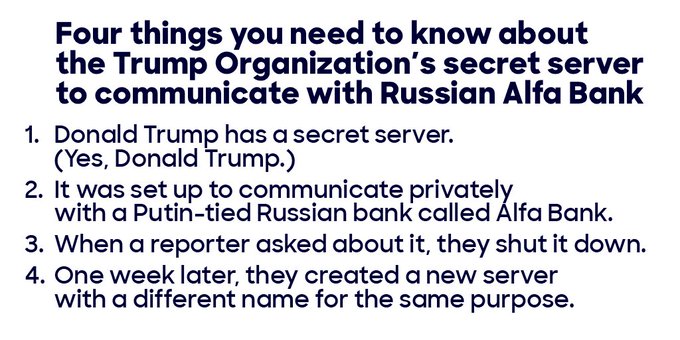 It’s time for Trump to answer serious questions about his ties to Russia. http://slate.me/2dWggCd

Trump should immediately disclose all of his ties and connections to Russia. 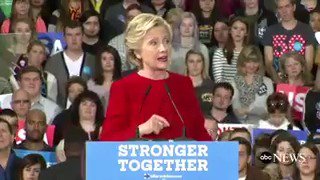 With just 8 days left, this can’t wait. RT if you agree Trump should immediately disclose all of his ties and connections to Russia.

Here’s a good one…
Computer scientists have apparently uncovered a covert server linking the Trump Organization to a Russian-based bank. 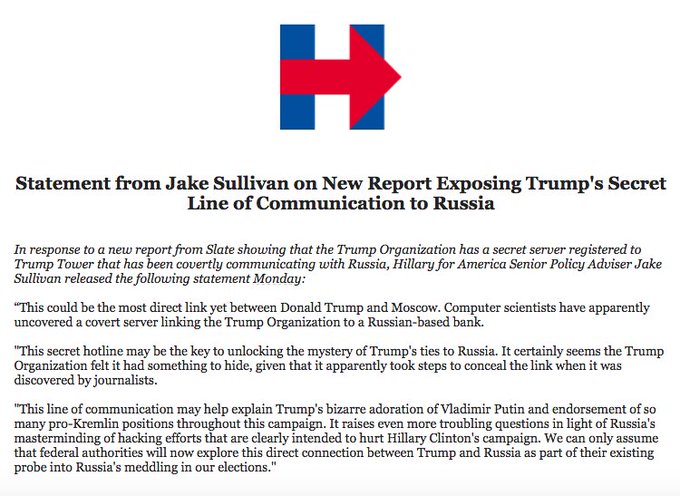 Computer scientists have apparently uncovered a covert server linking the Trump Organization to a Russian-based bank.

Trump has a secret server to Russia!
(Seriously?)

Donald Trump has tried to do business in Russia since the 1990s but has failed miserably.  If he was as tight with Russia as he claims why won’t they allow him to business there for the past 3 decades?  Here is an article by the liberal Mother Jones that documents these facts.

Hillary on the other hand has made a fortune selling Russia US uranium.  145 million give or take a mill.

From The Gateway Pundit:

In January 2013, Pravda celebrated the Russian atomic energy agency’s purchase of the company “Uranium One” in Canada.

That same company, Uranium One, owned uranium concessions in the United States. Because uranium is a strategically important commodity, the Russians would need approval from the Obama administration, including Hillary’s State Department, before the purchase took place.

Nine shareholders in Uranium One just happened to provide more than $145 million in donations to the Clinton Foundation in the run-up to State Department approval.

The Clintons took the cash from Uranium One officials before the deal was approved by Hillary Clinton’s State Department. The Clintons hid the donations which is a clear violation of the Memorandum of Understanding Hillary Clinton signed with the Obama administration wherein she promised and agreed to publicly disclose all donations during her tenure as Secretary of State.

Hillary Clinton’s campaign chairman John Podesta’s membership on the executive board of an energy company, Joule Unlimited, which received millions from a Putin-connected Russian government fund, also included “75,000 common shares,” according to an email exchange uncovered by the Wikileaks hacks.

He then tried to hide the assets to avoid disclosure:

In the newly-uncovered email exchanged under the subject “Podesta Outstanding Docs for Joule,” Eryn Sepp, who was an assistant to Podesta at the Center for American Progress, forwarded a message to Podesta from Mark C. Solakian, who was Senior Vice President and General Counsel at Joule Unlimited Technologies, Inc.

“It is my understanding that John transferred the resulting 75,000 common shares from the option exercise to the Leonidio LLC.,” Slovakian wrote in a January 2014 email, referencing the Delaware-based holding company. “As such, we would need to edit the Transfer of Share Agreement to reflect the transfer of 75,000 common shares to the LLC.”

If there are questions about who has ties to Russia, it’s Hillary and John Podesta who need to answer them.