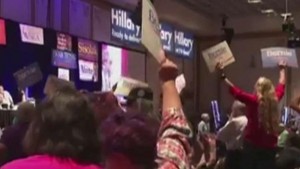 Violence broke out at the Nevada State Democratic Convention.  State party leaders, who just happen to support Hillary, blame it on the Sanders’ campaign, despite the fact that not once has a Sanders’ campaign stop has ever turned violence.  Harry Reid met with Bernie Sanders and apparently thought Sanders was going to blame his supporters and not Clinton’s people.  Instead, Sanders issued a statement that included the fact that someone broke into the apartments occupied by his volunteers and trashed them.  He also told about gunshots that were fired into his Nevada campaign headquarters.

Sanders railed against the Nevada State Democrats for being unfair to his campaign but he didn’t even bring up the fact that Hillary’s campaign in Nevada, led by soon to be disbarred lawyer, (In my opinion) Christina Gupana, intentionally violated Nevada campaign laws.  Read all about that HERE.

Here is a portion of the letter by Sanders:

“Within the last few days there have been a number of criticisms made against my campaign organization. Party leaders in Nevada, for example, claim that the Sanders campaign has a ‘penchant for violence.’ That is nonsense. Our campaign has held giant rallies all across this country, including in high-crime areas, and there have been zero reports of violence. Our campaign of course believes in non-violent change and it goes without saying that I condemn any and all forms of violence, including the personal harassment of individuals. But, when we speak of violence, I should add here that months ago, during the Nevada campaign, shots were fired into my campaign office in Nevada and apartment housing complex my campaign staff lived in was broken into and ransacked.

“If the Democratic Party is to be successful in November, it is imperative that all state parties treat our campaign supporters with fairness and the respect that they have earned. I am happy to say that has been the case at state conventions in Maine, Alaska, Colorado and Hawaii where good discussions were held and democratic decisions were reached. Unfortunately, that was not the case at the Nevada convention. At that convention the Democratic leadership used its power to prevent a fair and transparent process from taking place. Among other things:

Democrats talk about divisions within the republican party, but it’s the democrats who are in deep trouble.  If Hillary picks anyone but Sanders as vice president, expect millions of Sanders supporters to stay home or vote for Trump.