Canadian historian Steve Santini has built up a huge collection of torture devices that he has tested on himself.  They are mostly from the Medieval period but were still the most ruthless forms of torture right up until Obama gave Queen Elizabeth a collection of his speeches.  Now, that would leave a mark.

‘When I began to tighten the finger press, it felt uncomfortable but after a while the digit just felt sort of numb.

‘This should have been a warning sign to stop but instead I tightened the device further and did some rather agonizing damage to myself. And yes, that was my finger cracking.’

Over the years he has built up a collection of 220 antique torture instruments, including British thumbscrews from the 17th century that were used to suspend prisoners in mid-air and a cat o’ nine tails whip, which was used to flog prisoners in the 18th century.

Santini is also an author and among his books are the Catalog of Cruelty, which is an encyclopedia of dreadful devices which were once used either to squeeze information out of a prisoner or simply to punish them.

He said: ‘I do not love these instruments. In fact, I find many of them repulsive. That said, I collect them because I am fascinated with the creatures that created and used them.

‘We have not changed as a species. Sure, our technology may have evolved but we have not. We are still the greed-driven, paranoid, superstitious species we have always been.’

Santini said: ‘It is these very traits that are the lifeblood of torture. This is the fuel that births it, feeds it, and allows it to somehow become “morally acceptable”. Yesterday it was the rack and red hot irons and today it is water boarding and electricity.

‘I have three different versions of the shin crusher in my collection and all of them send shivers up my spine. 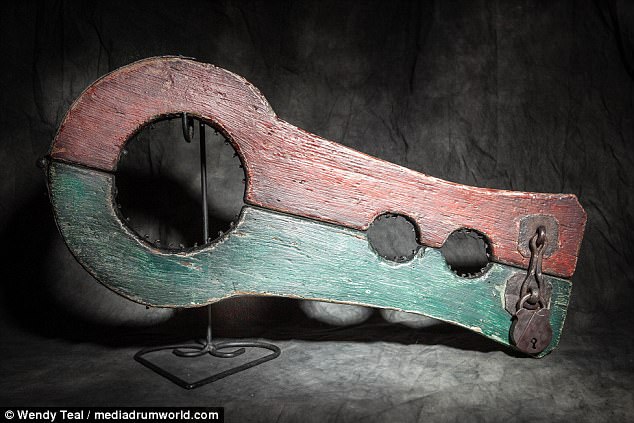