As people head out to the polls this Tuesday, eagerly anticipating the results from midterm elections later tonight, a new study suggests that some people might end up with a little bit of the blues.

Research from Washington University in St. Louis, Harvard Kennedy School and the University of California, Los Angeles suggests that supporters, not just the candidates, are impacted by Election Day results. The study shows just how tough an election loss is to swallow and how long the depression can last. 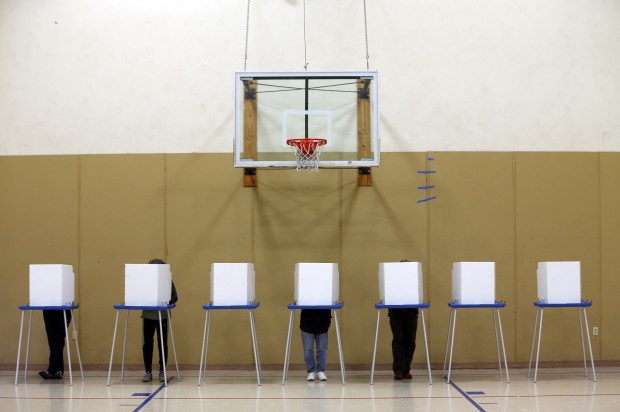 Voters fill out their ballots in a gym on election day at St. Sophia Greek Orthodox Church on Tuesday, Nov. 4, 2014, in Albany, N.Y. (AP/Mike Groll)

“Losing Hurts: Partisan Happiness in the 2012 Presidential Election,” published by Harvard Kennedy School as a working research paper, suggests that the sting of losing an election outweighs the joy for those who won. The sadness can last up to a week.

“One of our main findings is that the pain of losing the 2012 presidential election dominated the joy of winning it,” Dr. Lamar Pierce with Washington University said in a statement.

Just how sad was the losing team? The researchers compared it to how people reported feeling after the shooting of dozens school children in Newtown, Connecticut, and the Boston Marathon bombing. They found that paritsans were two times more emotionally affected by the political loss than these tragic events.

“We find that partisan identity is even more central to the self than past research might have suggested,” the researchers wrote. “In addition to affecting thinking, preferences and behavior, it also has sizable hedonic consequences, especially when people experience partisan losses.”

Brittany Maynard, Terminally Ill Woman Who Vowed to Take Her Own Life, Has Died

Getting Stoned Across America: The Legal Status...