Terrorists are setting dozens of fires all across the country of Israel.  Firefighting planes from Greece, Cyprus, Italy, Russia, Croatia are helping in trying to put the fires out.  Turkey has committed to send their planes to aid Israel.

Firefighters from several nations have flown to Israel to help fight the arson attacks.

For the uninitiated, “nationalistically motivated” is an oft-used Israeli euphemism for acts of terror. https://twitter.com/avimayer/status/801787542597148672 … 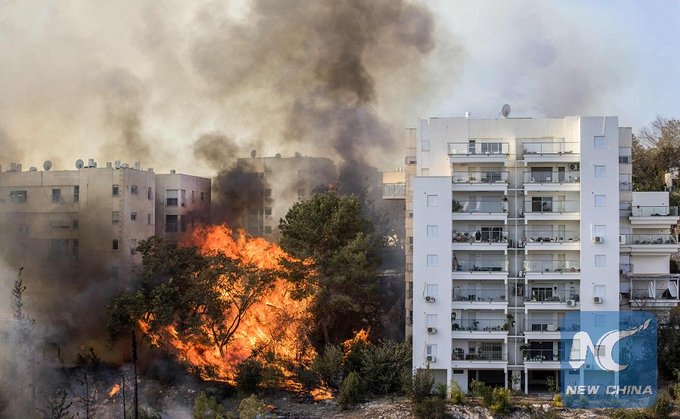 The Haifa fire was started in five different locations.

Likud and Bayit Yehudi MKs warned that the fires raging across Israel are terrorism on Thursday.

Education Minister Naftali Bennett tweeted: “Only someone to whom the land doesn’t belong could be able to burn it.”

Culture and Sport Minister Miri Regev said “anyone who has eyes and a brain can see that the fires in many places in Israel are not natural.

“We must find the terrorists who are burning our forests and endangering human lives,” Regev said, thanking firefighters for working to put out the blazes.

Transportation and Intelligence Minister Yisrael Katz said he plans to propose legislation that would allow the government to foreclose on the home and possessions of anyone who is convicted of arson, so that the victims can be repaid and so people are deterred from setting fires.

The fire is not destroying israel, it’s destroying Palestine, this is not something to be happy about, that’s our land up in flames

Some are celebrating the fires.