A never-before-seen video sheds new light on the Michael Brown case and suggests he did not rob a convenience store as had previously been thought, but instead had been involved in a drug deal with the clerks.

Filmmaker Jason Pollock obtained a copy of the clip and shared it with the New York Times Saturday as part of a preview for his new documentary about the case, titled Stranger Fruit.

The video shows Brown 11 hours before he was fatally shot by a white police officer in Ferguson, Missouri.  The 18-year-old can be seen visiting the same convenience store, Ferguson Market and Liquor, around 1 AM on the day he later died.

County police spokesman Sergeant Shawn McGuire told the newspaper the video hadn’t been released until now because the footage was not relevant to the investigation.

McGuire later told the DailyMail.com: ‘The incident is still irrelevant to our investigation because our department investigated the encounter between Michael brown and Darren Wilson.’

Brown appears to be giving a small bag, which according to Pollock contained marijuana, to the employees, who in turn give him two boxes of cigarillos. The teenager starts to walk away with the cigarillos inside a bag, but comes back and gives them back to one of the clerks, who puts the bag behind the counter. 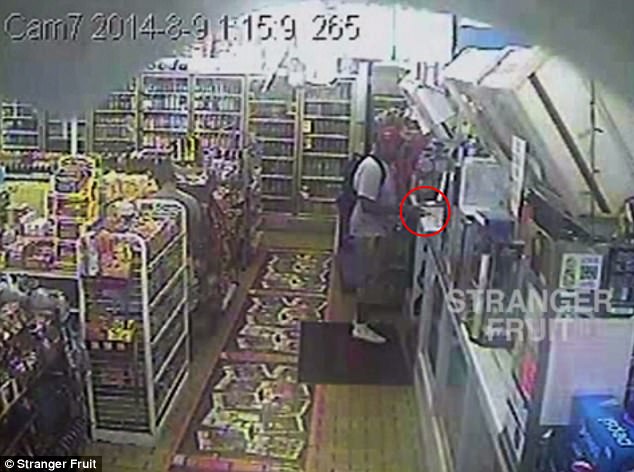 The new footage shows Brown appearing to give the store clerks an item, which according to Pollock was a bag of marijuana, during a previous visit to the shop in Ferguson 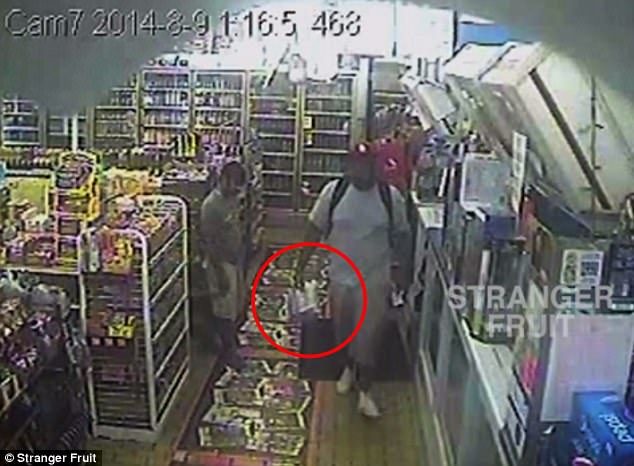 Brown can then be seen walking out of the store with a bag in his hand, which contains cigarillos that seem to have been given to him by the employees 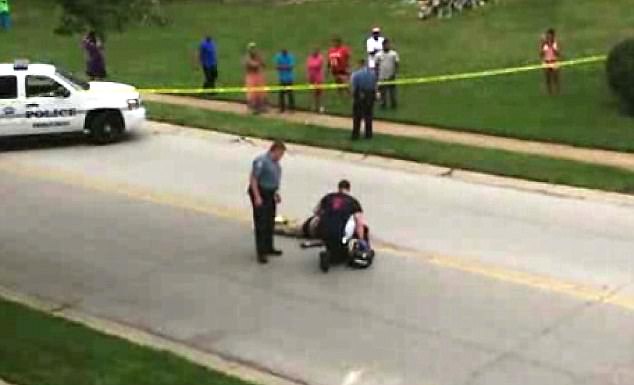 Brown was shot and killed by a white police officer on August 9, 2014 in Ferguson, Missouri. His Body lay on the sidewalk (pictured) for four hours afterwards

The implication behind the video, according to Pollock and to Brown’s mother, is that there was a previous understanding between Brown and the clerks when the teenager later came back to the store – and that he did not steal the cigarillos, but obtained them through a negotiated deal.

‘I was surprised to hear that two years later, there was a video,’ Brown’s mother Lesley McSpadden told Pollock in his documentary, which aired Saturday at SXSW.

‘What you’re going to see on this video is what they didn’t show us happened, that clarifies that there was an understanding.’

‘There was some type of exchange, for one thing, for another,’ McSpadden added.

Pollock, who has earned praise from Michael Moore for his documentary, is now challenging the police’s account of the events that unfolded prior to Brown’s shooting.

Lawyers for the convenience store and its employees, however, told the New York Times there was no deal with Brown and denied the filmmaker’s account.

‘There was no transaction,’ Jay Kanzler told the newspaper. ‘There was no understanding. No agreement. Those folks didn’t sell him cigarillos for pot. The reason he gave it back is he was walking out the door with unpaid merchandise and they wanted it back.’

An autopsy showed that Brown had THC, an active ingredient of marijuana, in his system when he died.

:SIGH: We know this is, in all likelihood, going to stir up a lot of anger, and possibly start riots if not handled properly.

Here is a fact that we can almost guarantee will not be discussed by any of the American mainstream news media: Michael Brown could have just finished a Christian Science Reading group session for all it matters.  The incident that led to his death happened because of how Brown responded to Officer Darren Wilson.  What Black Lives Matter and the rest of the race-hustling social justice warriors refuse to acknowledge is you can’t assault a police officer sitting in his car, go for his service revolver, elevate the level of tension by smack talking the officer by calling him a p#ssy won’t do anything, then seconds later charge at him and not expect to be shot.

And here’s the closer… people will now say that if the new revelation is true there was no reason for the officer to stop Michael Brown.  This too doesn’t change the reason for the fateful outcome. If Michael Brown had done no wrong then he must have known it and it begs the question of why he behaved the way he did as mentioned above.

There are some contradictions in the new story.  First off, how come the clerk followed him to the door before Michael Brown turned to him, physically shoved him back, then threatened the clerk by moving toward him using a threatening posture if there was an understanding?

And why were the police called about a robbery at that store giving a description of Michael Brown, which led to Officer Wilson stopping Brown in the first place?  It doesn’t matter whether the store employee made the call of another customer who was in the store when it happened, a call to 911 was placed.

And finally, if crockumentary filmmaker Michael Moore gives praise for the documentary we can safely assume most of the film has nothing in it that is truthful.