Police came under heavy gunfire and arrested 31 people during another night of racially-charged protests in Ferguson, Missouri, sparked by the fatal shooting of an unarmed black teenager by a white police officer ten days ago.

Demonstrations, mostly peaceful but with spasms of violence by smaller groups, have flared since Michael Brown, 18, was shot dead while walking down a residential street on August 9. 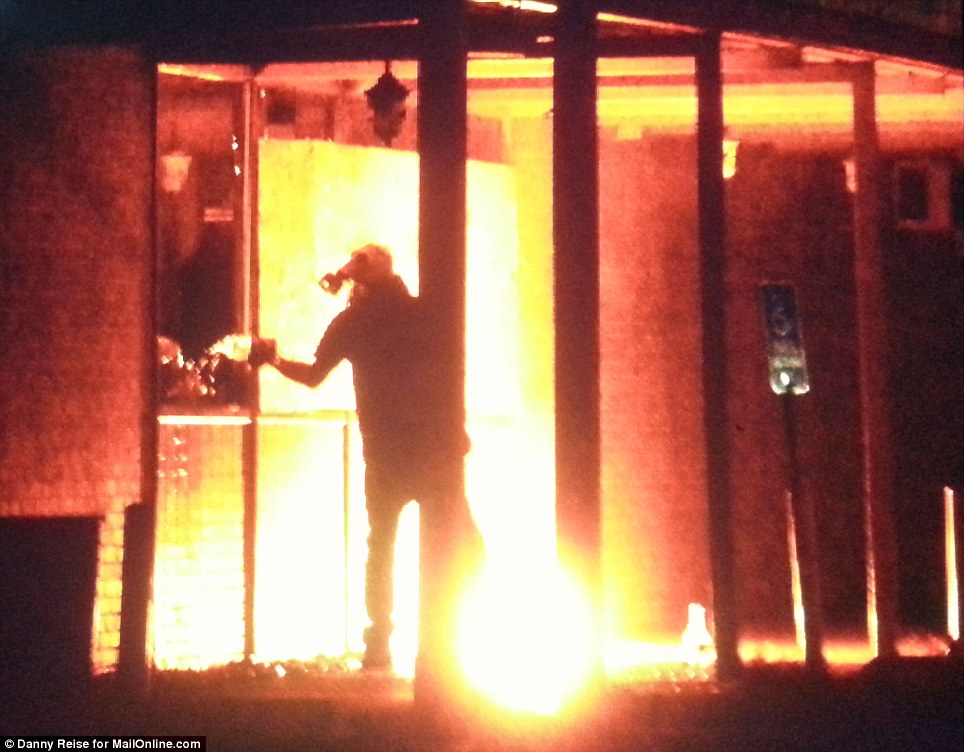 Protester pours fuel into Red BBQ restaurant, after a previous Molotov cocktail he threw burns outside the building. The fire outside was put out by fellow protesters, Ferguson, Missouri on Monday night 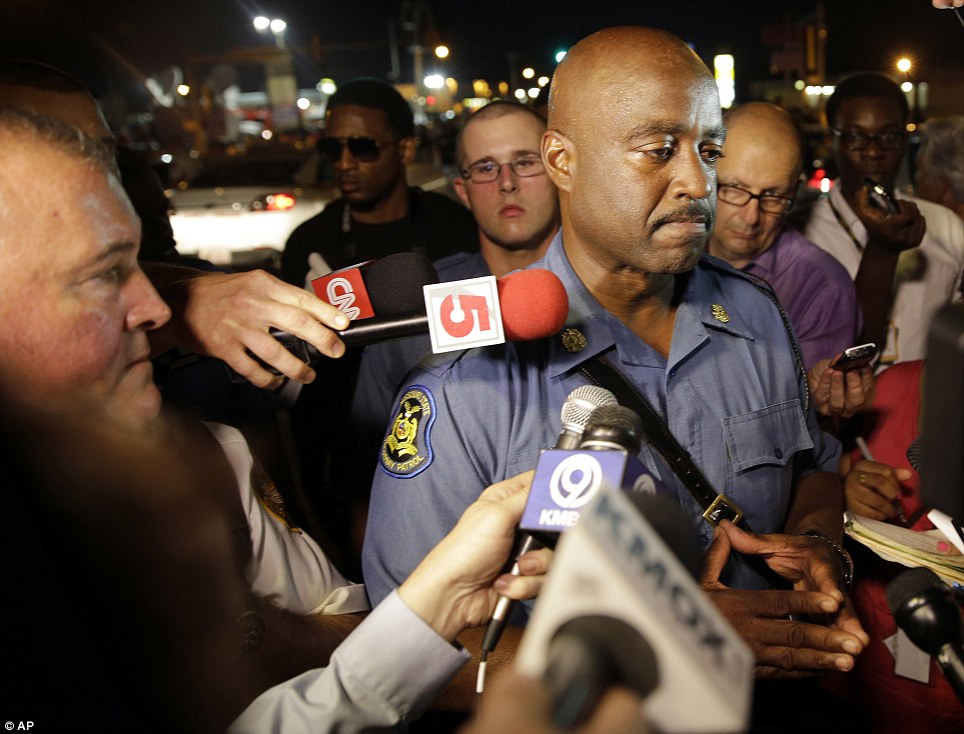 Missouri Highway Patrol Captain Ron Johnson – who took over patrol in Ferguson as of Thursday night – told CNN later that two demonstrators were shot, but not by police, and had been transported to hospital 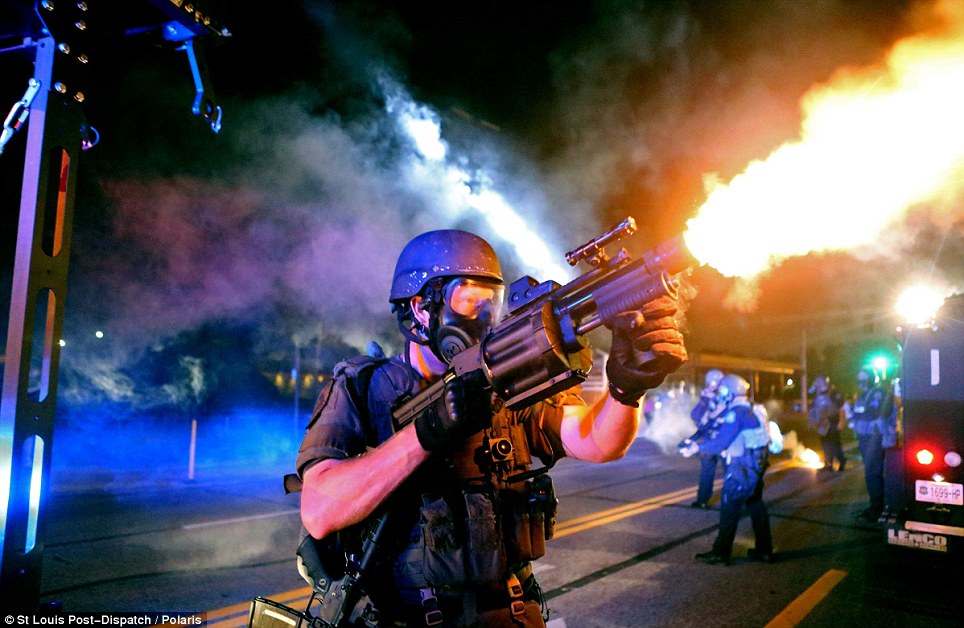 Police fire tear gas in the direction of where bottles were thrown from crowds gathered near the QuikTrip on W. Florissant Avenue on Monday in the St Louis suburb of Ferguson 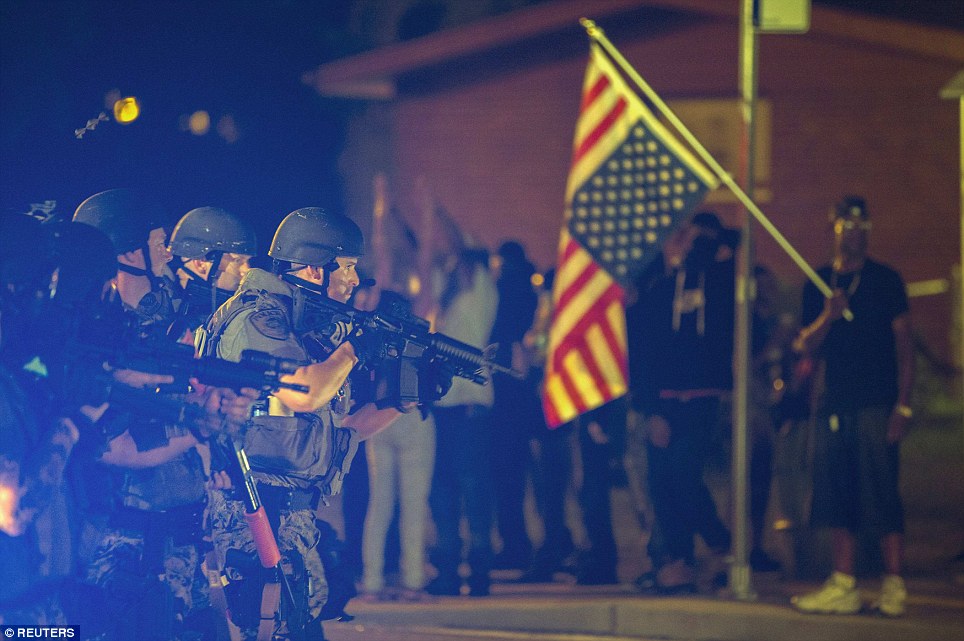 As officers sat with guns pointed atop armored vehicles, the authorities used LRAD (Long Range Acoustic Device) crowd control systems to send out a painful noise to try and disperse the crowd 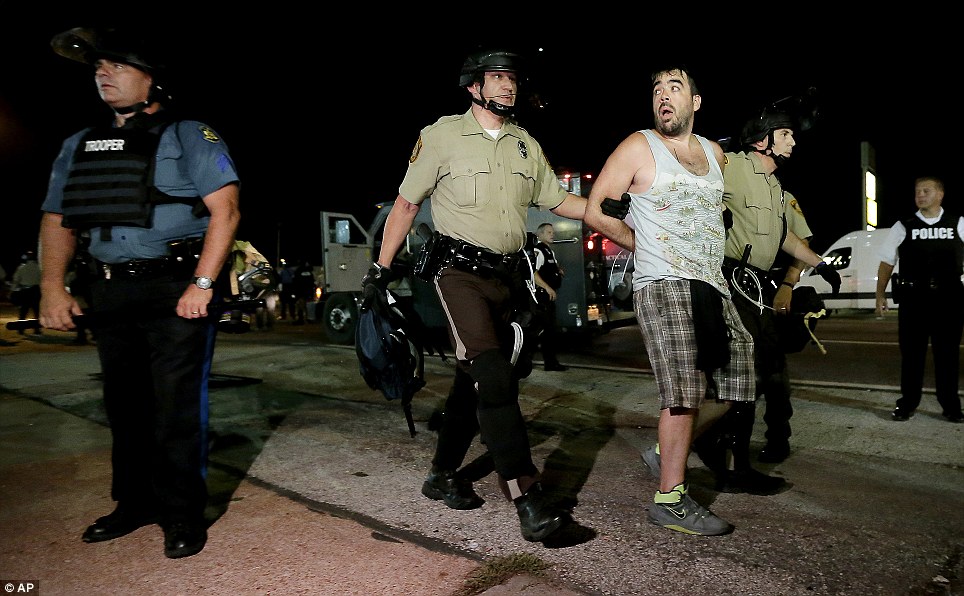 The relatively peaceful protests eventually turned nasty on the streets of the St. Louis suburb after police in riot gear and gas masks formed a barricade and stood watch over the protesters for almost two hours 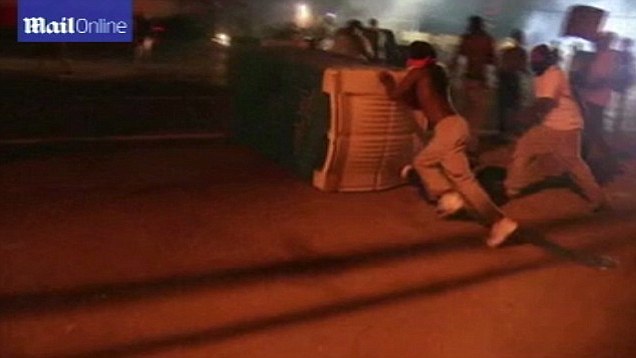 Captain Johnson said that ‘violent agitators’ are using largely peaceful demonstrations as an excuse to commit crime. He said some of those arrested had traveled across the country, from as far afield as New York and California, to take advantage of the town’s unsettled state.

‘Not a single bullet was fired by officers despite coming under heavy attack,’ he told a news conference today.

Riot police had confiscated two guns from protesters and what looked like a petrol bomb. Four officers had been injured.

Johnson separately told CNN that two people were shot within the crowd, but not by police, and were taken to hospital. There was no immediate word on their condition.

‘This has to stop. I don’t want anybody to get hurt. We have to find a way to stop this,’ said Johnson, an African-American who grew up in the area and who took over security efforts last Thursday after the mostly white local force was accused of using excessive force against blacks.

He added: ‘This nation is watching each and every one of us. 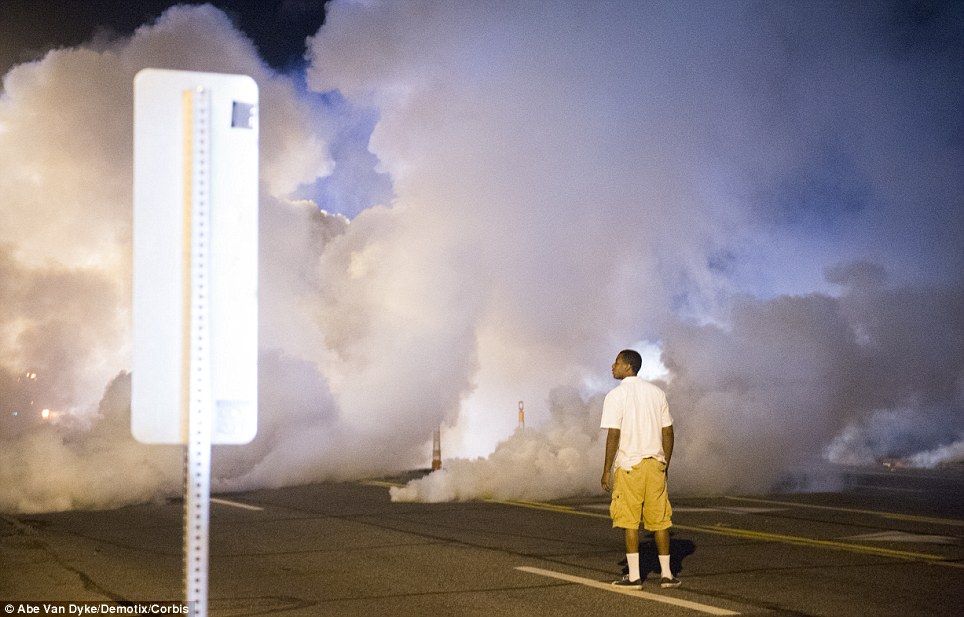 A male protestor stands in the street while clouds of tear gas erupt from canisters in Ferguson on Monday, a once-quiet St Louis suburb which has been rocked by racial tensions following the shooting of unarmed black teen Michael Brown 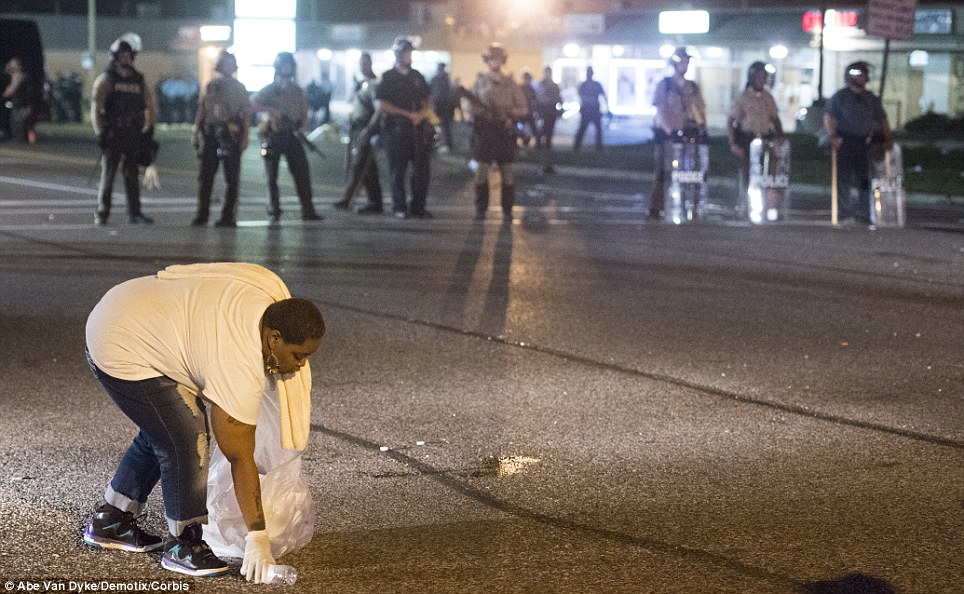 A woman picks up garbage in the street left over from protestors in Ferguson. Confrontation resumed as protestors marched towards heavily armed police on Monday night. Law enforcement reported 31 arrests 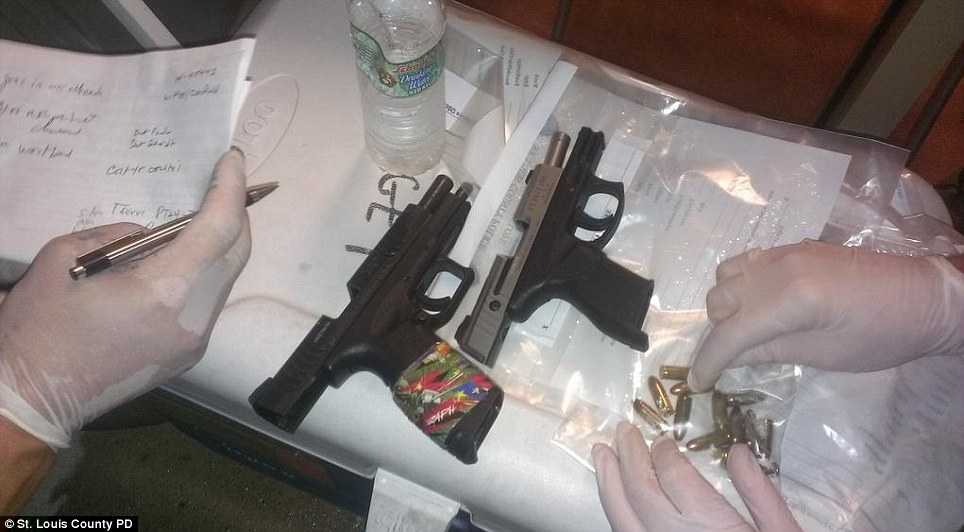 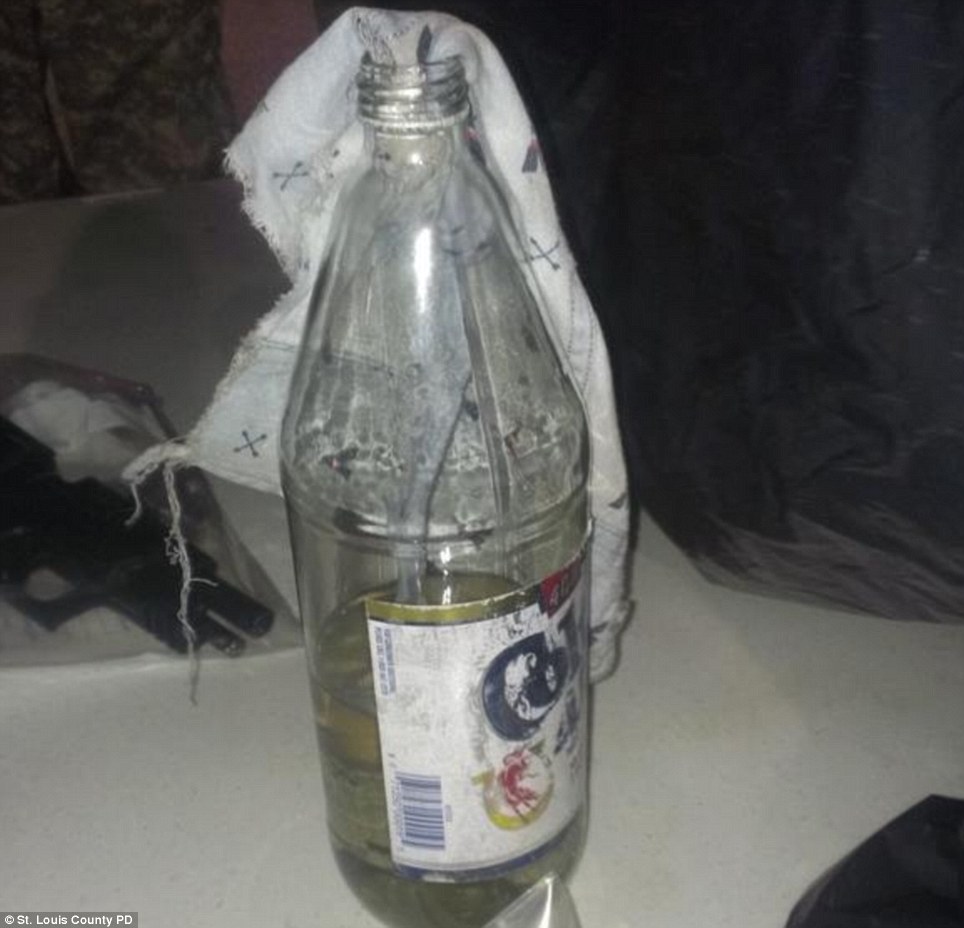 ‘I am not going to let the criminals that have come here from across this country, or live in this neighborhood, define this community. We do not want to lose another life.’

The National Guard, the U.S. state militia, has been deployed in the St. Louis suburb of 21,000 people to stop looting and burning that have punctuated the protests.

President Obama and civil rights leaders have appealed for calm while a federal investigation into the shooting gets underway.

‘While I understand the passions and the anger that arise over the death of Michael Brown, giving in to that anger by looting or carrying guns, and even attacking the police, only serves to raise tensions and stir chaos,’ Obama told a news conference on Monday.

‘It undermines, rather than advancing, justice.’

Police had closed a roadway to traffic to provide a path for marches but said a smaller group within the larger crowd hurled bottles, rocks and petrol bombs at officers standing near armored vehicles. 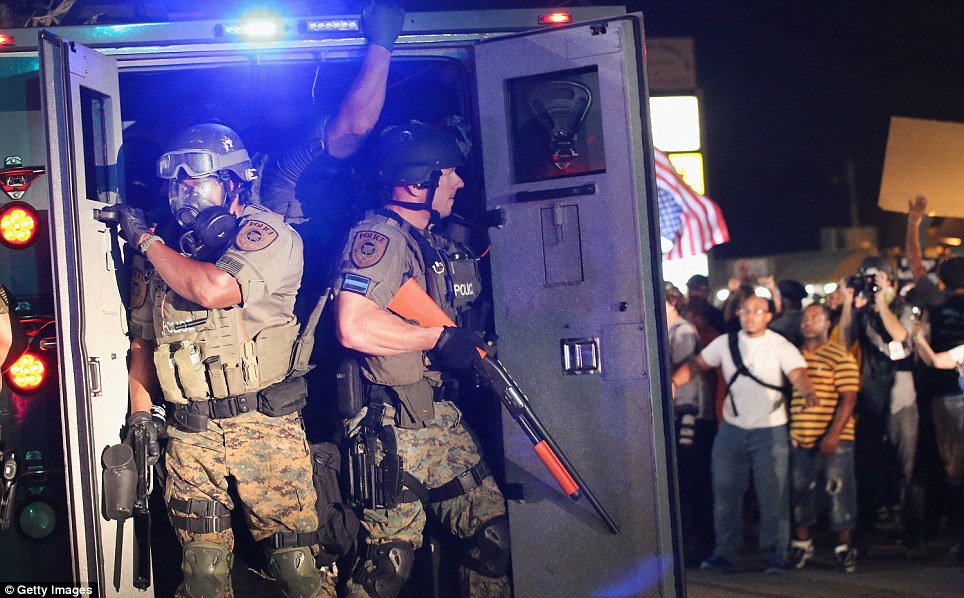 Tonight Ron Johnson has defended his decision to clear the streets, including taking journalists into custody, saying it was difficult to tell reporters apart from protesters 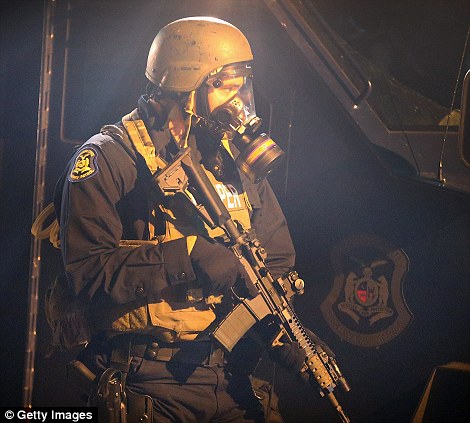 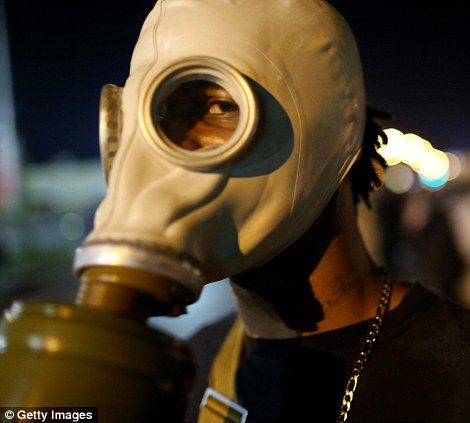 In a news conference Ron Johnson said that the nation was watching and judging what is happening in Ferguson. Both armed police and protesters were pictured wearing gas masks on Monday night 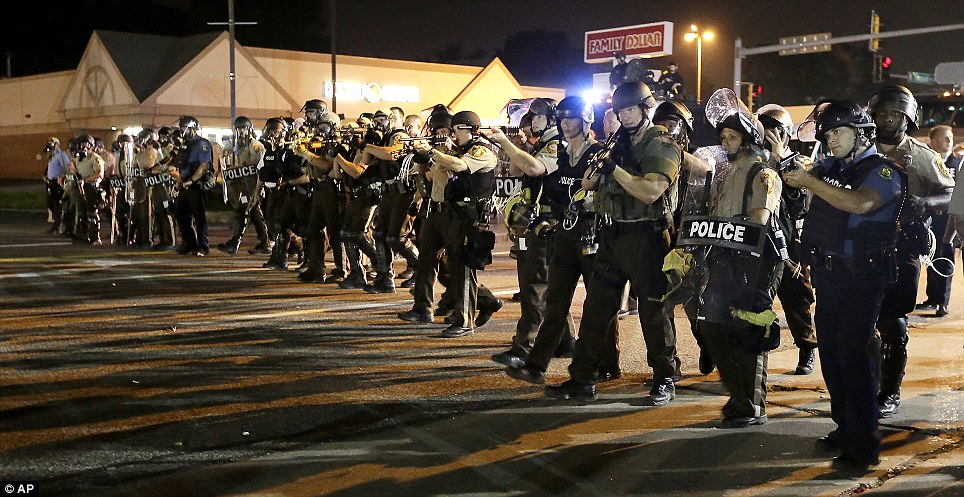 Some demonstrators, including a church minister using a blow horn, urged crowds to calm down.

CNN’s Don Lemon and Jack Tapper were presenting live from the middle of protests when teargas was thrown and they got caught up in the melee.

Lemon quickly put on his bullet proof vest and gas mask while continuing to present live TV. Tapper gave his gas mask to a photographer who had been on the receiving end of the tear gas attack.

The reporters were eventually moved on by police, who said it wasn’t safe for them to remain because there had been a shooting in the area.

Earlier in the evening Tapper had liken the police presence in Ferguson and the weaponry on show to what he had seen while reporting from Afghanistan.

‘These are armed police, with – not machine guns – semi-automatic rifles, with batons, with shields, many of them dressed for combat. Now why are they doing this? I don’t know. Because there is no threat going on here. None that merits this. There is none,’ said Tapper.

‘Absolutely there have been looters, absolutely over the last nine days there’s been violence, but there is nothing going on on this street right now that merits this scene out of Bagram. Nothing.

‘So if people wonder why the people of Ferguson, Missouri are so upset, this is part of the reason. What is this? This doesn’t make any sense.’

Protesters had began throwing rocks at MSNBC’s Chris Hayes during a live broadcast, demanding he ‘tell the true story’.

As police began trying to clear the streets of protesters, several took their frustrations out on Hayes.

‘The gentleman behind me in the mask is telling me this is a civil rights movement, it’s just not about Mike Brown, it’s about all people,’ Hayes explained. ‘There’s a lot of frustration.’

A photographer working for the Getty photography agency was arrested in Ferguson on Monday. Scott Olson was arrested because he wasn’t in the required media area, said police.

Thirty-one arrested in Missouri as police come under gunfire 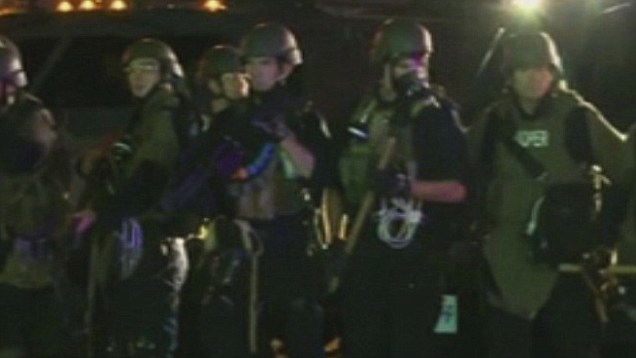 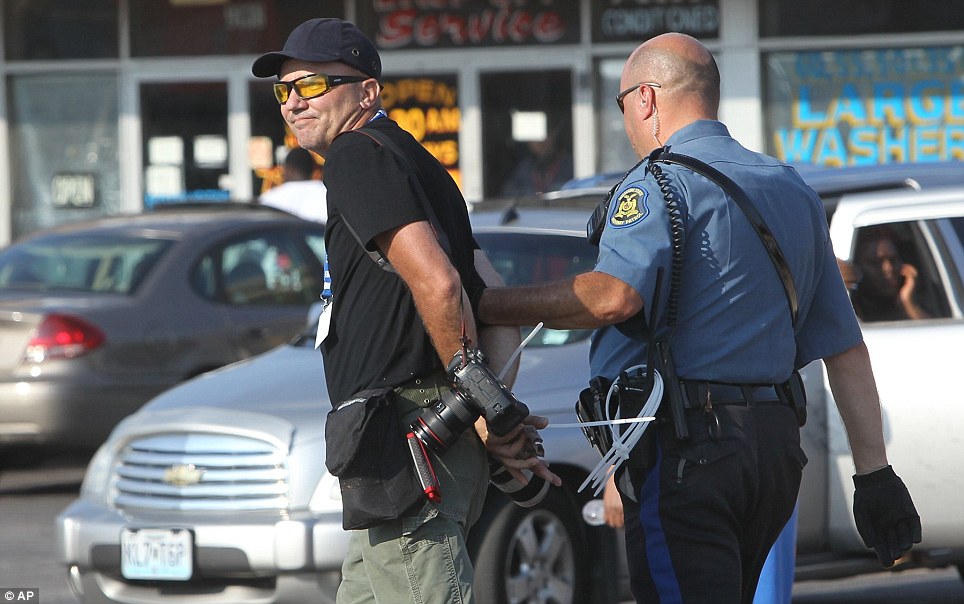 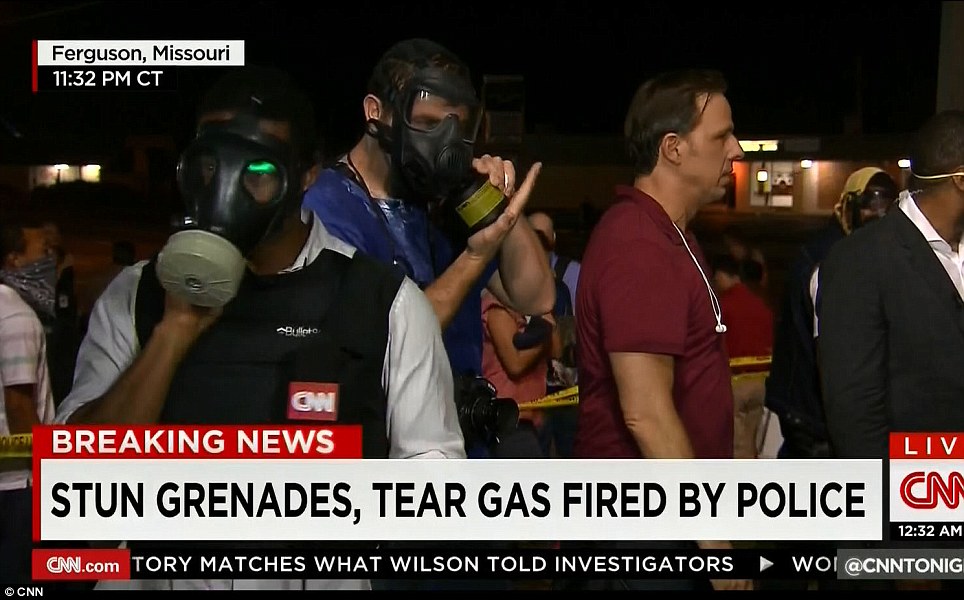 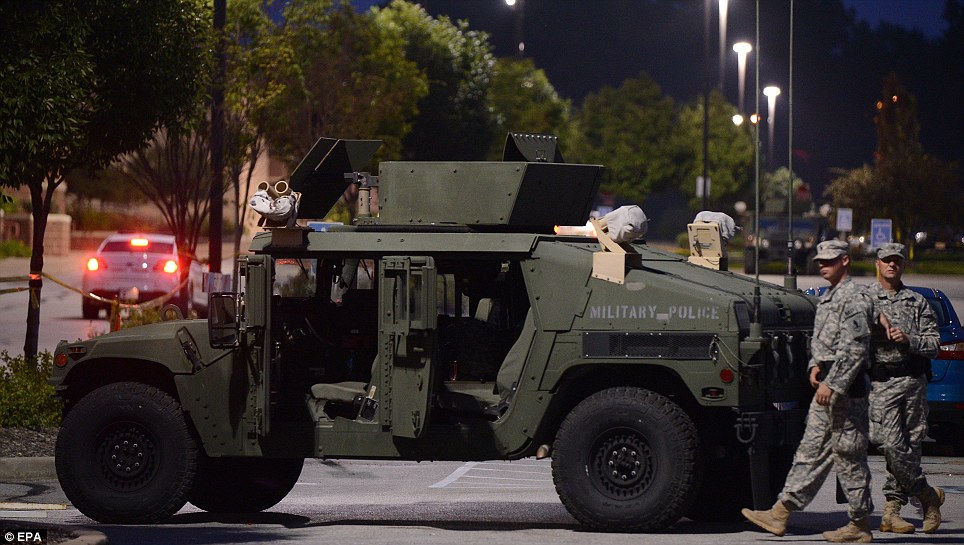 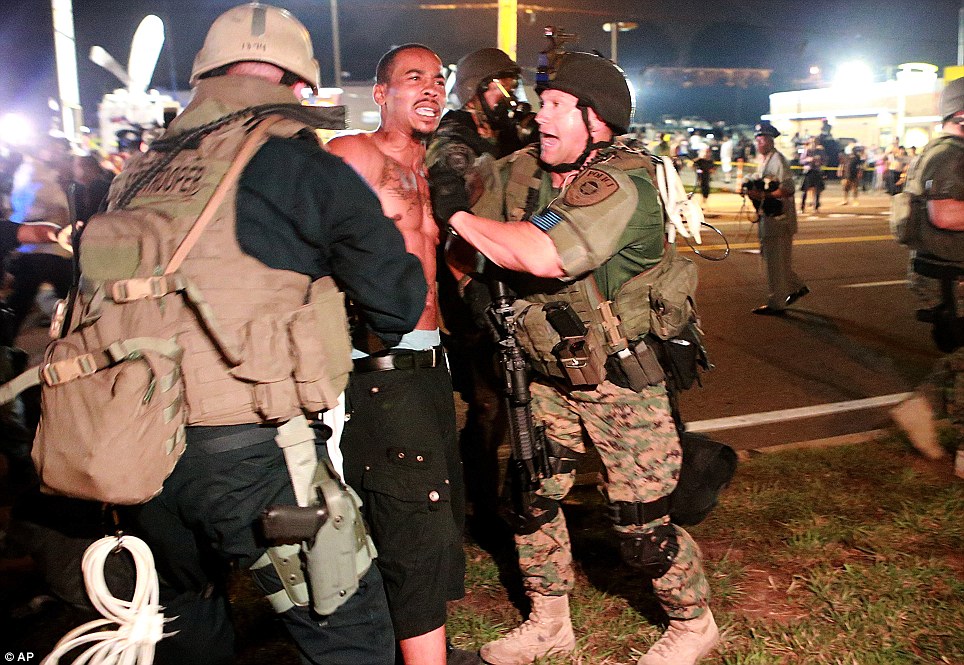 A protester walks away after appearing to have been hit with tear gas during another night of violence in Ferguson, Missouri 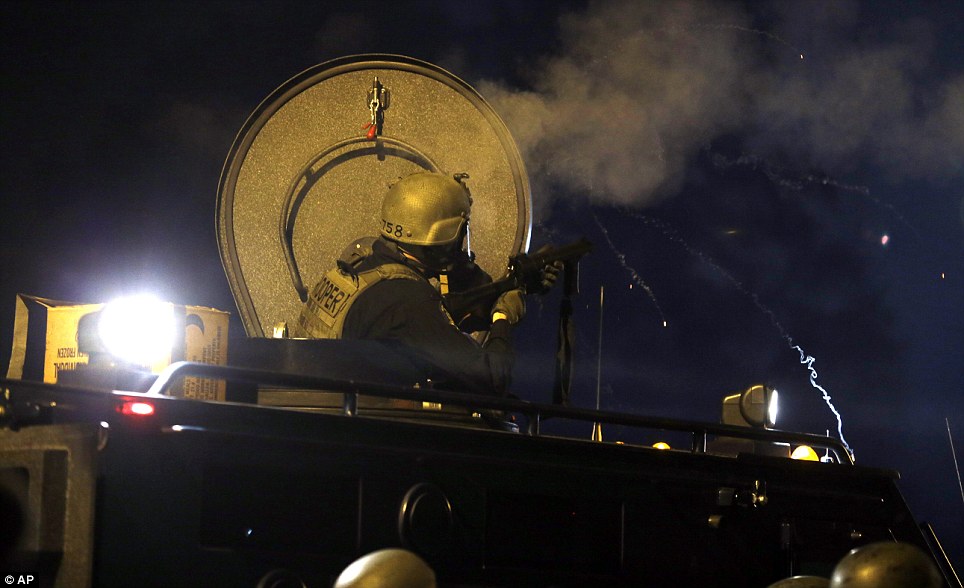 Police fire tear gas from atop an armored personnel carrier on Monday night in the St. Louis suburb 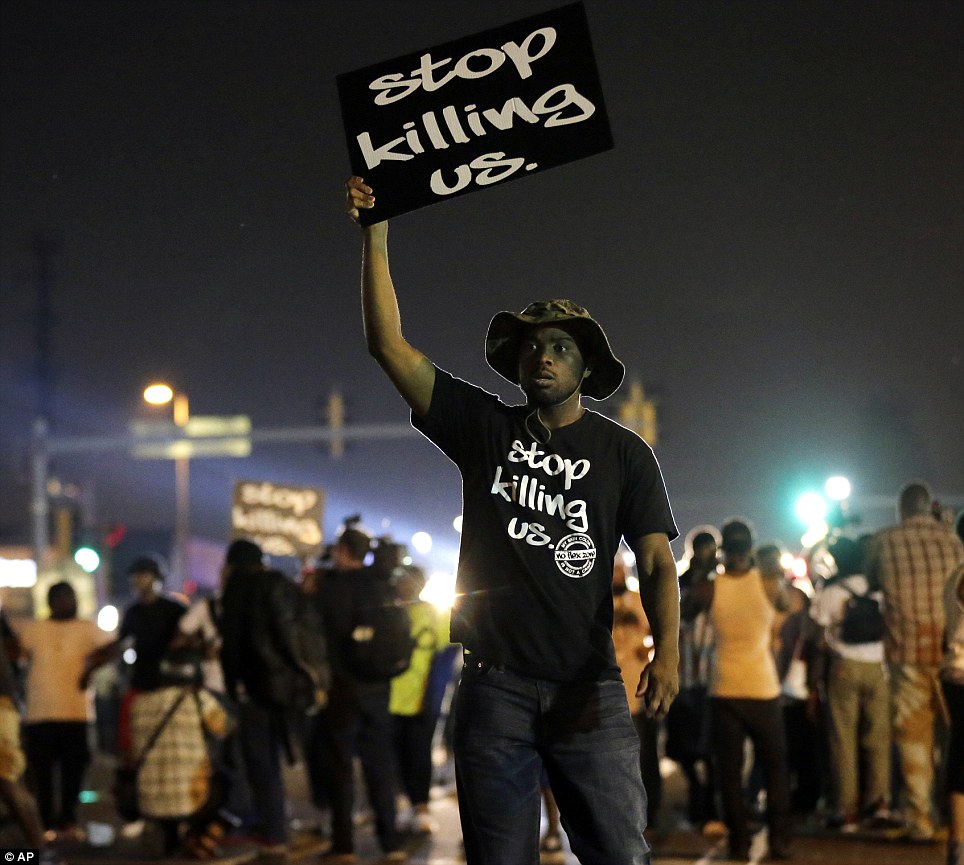 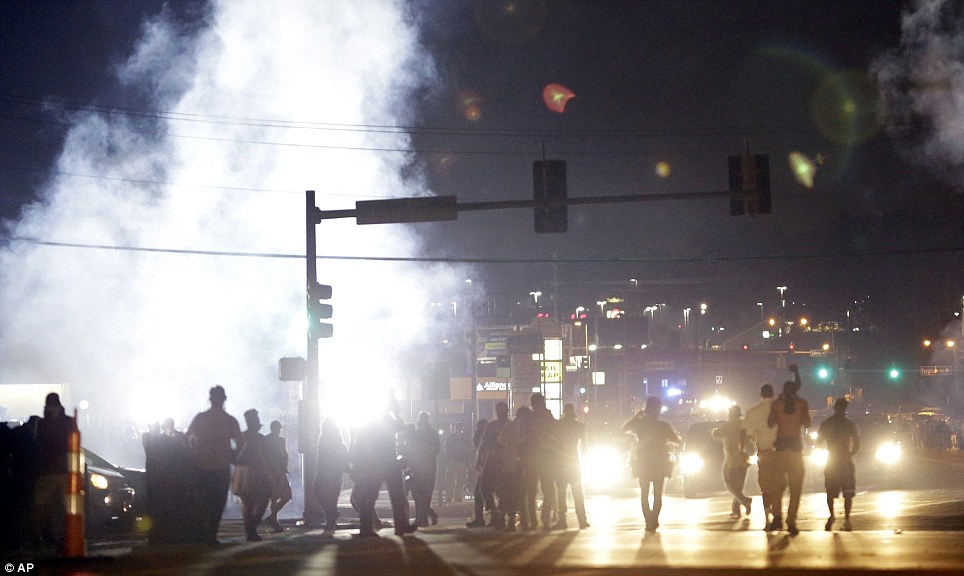 There have been largely peaceful protests over Brown’s killing elsewhere in the U.S. including in St Louis, New York, Seattle and Oakland.

Missouri Governor Jay Nixon declared a state of emergency in Ferguson on Saturday and a curfew from midnight to 5am. The curfew was lifted last night. He also mobilized the National Guard to back up state police.

Obama said he told the governor the use of the National Guard should be limited and called for conciliation in communities hit by the unrest. U.S. Attorney General Eric Holder will visit Ferguson on Wednesday, Obama said.

Holder said more than 40 FBI agents were canvassing Ferguson neighborhoods in their investigation and an additional medical examination was being performed on Brown. Results of autopsies done by federal and St Louis County authorities were pending.

Brown was shot by Ferguson police officer Darren Wilson, 28. The cope is now on paid leave pending the results of the investigation and has gone into hiding.

Brown was shot at least six times, including twice in the head, and may have been lowering his head in surrender when the fatal shot struck, according to Brown family attorney Daryl Parks.

There were no signs of struggle with the officer and no gunshot residue on the 18-year-old’s body – although his clothing still has to be examined.

Ferguson police quoted Wilson as saying he had asked Brown and a friend to move off the street where they were walking, and onto the sidewalk. Wilson reported that Brown reached into his patrol car and struggled for his gun.

St. Louis County prosecutors’ spokesman Edward Magee said the case could be presented this week to an investigating grand jury which would decide whether Wilson will be indicted.

Ferguson has seen a stark demographic shift in recent decades, going from all white to mostly black. Out of a police force of 53, three officers are black.

Brown’s friend Dorian Johnson, 22, said Wilson had reached out of his car window to grab Brown and the teenager tried to get away.

Johnson said Brown held up his hands to surrender but Wilson got out of his car and shot him several times.

Several other eye-witnesses have also claimed that Brown had his hands up to signal that he was surrendering.

However assistant pathologist Shawn Parcells told CNN on Monday afternoon that it cannot be proved from the initial autopsy whether Brown was rushing the officer or simply standing at a distance.

Family lawyer Benjamin Crump described the teen’s death as an ‘execution in broad daylight’. He said it was important for the family to have their own autopsy results as they did not trust the work of the local police.

Later on Monday the St Louis County medical examiner also confirmed that Brown had been shot between six and eight times.

The National Bar Association, containing the largest network of black attorneys and judges, filed a lawsuit on Monday against Ferguson and its police department, demanding it protect evidence of the shooting and arrests made during protests.

Looting has left a number of Ferguson stores in shambles. Two fires were set on Monday evening, one at a business and one at an unoccupied home, Johnson said.

The disturbances are the worst of their kind for more than a year. In July 2013, there were angry, albeit peaceful, protests in cities across the United States over the acquittal in a Florida second-degree murder and manslaughter trial of neighborhood watch volunteer George Zimmerman, a white Hispanic, who shot dead an unarmed black teenager, Trayvon Martin, in the street during a scuffle in February 2012.

Leaders of the Nation of Islam and other black activist groups working to calm tensions in Ferguson are asking protesters to clear the streets of the St. Louis suburb at sunset amid the National Guard’s arrival.

Organizers from the New Black Panther Party, Black Lawyers for Justice and other groups joined St. Louis-area community activists on Monday to again call for restraint on the part of protesters seething over the police shooting death of 18-year-old Michael Brown.

They also condemned Missouri Governor Jay Nixon’s decision to summon the National Guard, which they fear could escalate the violence.

The call to clear the streets came as police accelerated their own crowd control efforts Monday, including the blocking of access to the burned-out QuikTrip convenience store that has become the hub of demonstrations.

Rapper and St. Louis native Nelly appeared in Ferguson, Missouri, on Monday night and appealed to local residents to remain calm following more than a week of protests.

Speaking before a large crowd, Nelly said violent protests weren’t the right way for the community to come to terms with what had happened.

‘We’ve got to understand that we have options and stop choosing the reaction option cause at the end of the day we gonna pay – our brother are gonna be the ones in jail,’ he said.

The rapper, best known for his 2002 number one Hot In Heere, had been heavily criticized on social media in recent days for being of touch with what was happening in Ferguson after he called on local people to ‘calm down.’

‘I understand the frustration, but we have to strategize before we overreact,’ he told TMZ on Saturday. ‘We don’t get no do-over on s**t like this, so we have to do it right the first time.

‘Ain’t nothing happen no different that hasn’t been happening… At the end of the day, we should have waited to strategize first and take all the right steps to organize.’