Unemployed QB Colin Kaepernick says he will stand for the national anthem next year, wherever he is.  My guess is managing a 7-11.  He was unable to get a deal from the 49ers and my guess is that other NFL teams are not knocking his door down, so now he is doing damage control.  Too little, too late.  Any team that would even consider signing Kaepernick, would face major problems from it’s fans.  With declining numbers, it’s something they can’t ignore.

Kaepernick started a movement last year by taking a knee during the national anthem.  Others followed his example, which angered many Americans who saw it as disrespecting our troops.  A boycott was started and the attendance and viewership of NFL games fell tremendously, sparking the league to come up with some ridiculous reasons for the decline other than Kaepernick and the boycott.

Kaepernick, who is expected to opt out of his contract with the San Francisco 49ers, either sat or kneeled while The Star-Spangled Banner was played before Niners games last season, a protest meant to draw attention to racial inequality and police brutality. He will discontinue his public protest in 2017, wherever he plays next season, a person with knowledge of Kaepernick’s plans told USA TODAY Sports’ Tom Pelissero.

Kaepernick’s refusal to stand during the anthem was adopted by several other NFL players and athletes in other professional sports leagues. It led some to boycott the NFL, which potentially contributed to the league’s 8% decline in ratings last year.

Kaepernick said last September that he had received death threats in the days after he began his protest in the preseason.

ESPN was the first to report that Kaepernick would end his national anthem boycott. 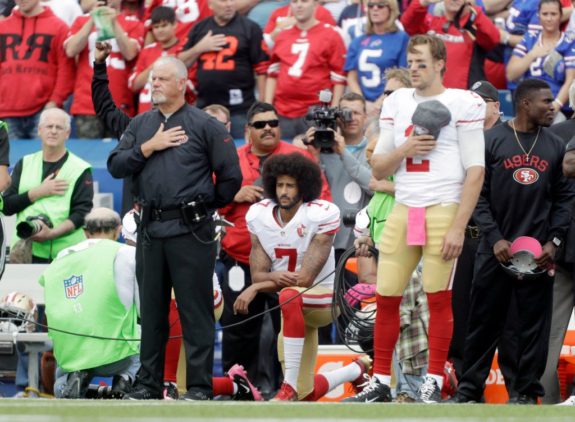