Scientists have located what they believe is the largest pack of chimpanzees in the world.  It has 200 members and they are warrior apes.  They drive off their competition, chase down monkeys and kill them for food.Sometimes they attack each other if they get in the way.

Little by little, the chimpanzees of Ngogo have slaughtered their way to the top.

With a community of more than 200 members, the Ngogo chimps in the Ugandan rainforest are said to be the most brutal troop in the world, often waging violent attacks on neighbouring tribes to expand their territory.

A new Discovery documentary has provided a captivating glimpse into the lives of these ‘warrior apes,’ following the group for 23 years to reveal their human-like complexity as the chimps hunt, fight, and support each other.

In one shocking clip, several chimps can be seen cooperating to take down a monkey – and later dividing the kill amongst themselves.

Researchers have been following the chimp warriors for over a decade now.  In that time the pack has grown from 142 in 1996 to about 200 in 2017.  The work in a controlled frenzy, running down monkeys, killing them and then dividing the bounty among themselves.  Even in 1996, the pack was much larger than any other packs that were known at them time.

Before studying this pack, researchers thought that chimps only hunted when they could not find fruits and other vegetation, but the researchers have found the complete opposite to be true.  They prefer to hunt and if not successful, they go after the fruit.

Disturbing footage shows several males hunting a monkey, cooperating to corner it up in a tree and grab it from behind.

And, once they’d captured and killed their prey, the chimpanzees divvied up the meal.

‘Each took an arm or a leg, and they literally started drawing and quartering this monkey [as if to say] “Here’s a leg – it’s yours,”’ Watts says in the documentary.

Another shocking clip shows the chimps ganging up on a member of their own group, beating and kicking him. 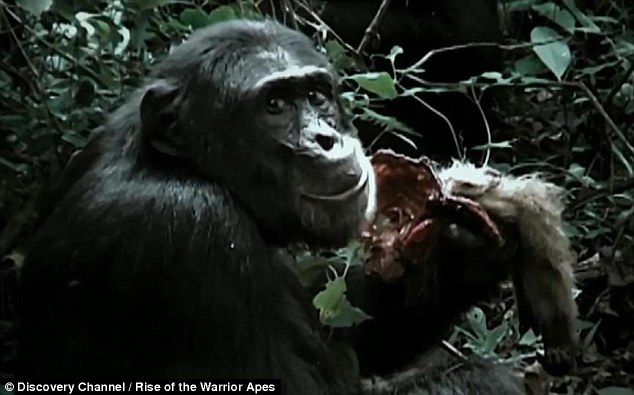