The Pennsylvania Department of State has now issued a new directive that prohibits county election boards from cooperating with the audit that has been administered by the U.S. Senate. The Pennsylvania Secretary of State’s office issued the following directive:

1) Election officials are not allowed to turn over election material to any third party.

2) Equipment that has been turned over to a third party is not going to be allowed to be used in a future election.

3) The state is not going to reimburse counties for the cost of the replacement equipment.

Take a look at the directive: 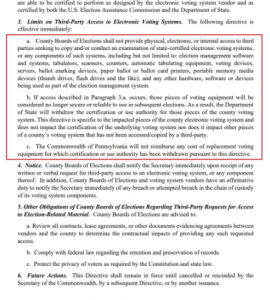 This directive was administered by hard-left politicians who changed the voting rules in Pennsylvania regarding the pandemic simply by executive order.

Texas and 20 other states have sued Pennsylvania for violating the U.S. Constitution because they have made changes to the voting rules and procedures through the courts or through some sort of executive actions. But these states did not change through any of their state legislatures as spelled out in the United States Constitution. The U.S. Supreme Court ultimately threw this case out, allowing the lawlessness of the states to continue. Apparently, that is the Biden White House for you.

However, it’s not just the Biden White House. Pennsylvania has some terribly funny stuff going on. We have had some doozies in the White House with LBJ, Nixon, Clinton, Obama, and several others, but Biden could ultimately end up becoming the most corrupt presidential administration in history.