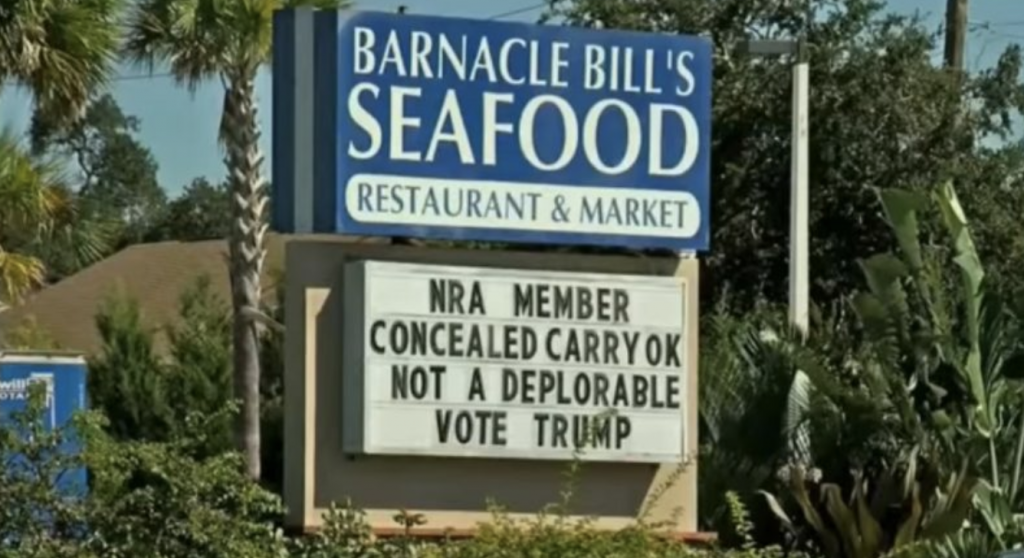 The Controversial sign at Barnacle Bill’s restaurant on Tamiami Trail is causing a flurry of activity on social media.

On a Facebook post made Thursday, 782 comments ranged from comical to furious to supportive for the NRA and the presidential candidates. People said they would visit the restaurant more while others said they would not go at all.

“All businesses are in their right to post these signs. But remember there are people on the other side who might choose not to go to your restaurant because of it.”

“It’s the owner’s sign,” reads another. “He/she can post whatever they want, but I don’t think it’s a wise move. It will turn away a lot of business, both from Democrats, and even people who don’t care about politics but are against/fear open carry.”

“This is America, it’s his business and it’s his right to vote how he chooses and so do I. It won’t change where I eat if I like the food.”

Another comment reads how, “Everyone is entitled to their own beliefs, however, this is a business not a person. Businesses should always avoid politics, lest it have a negative impact on the business and the employees.”

Politics aside, one thing remains clear; the text on B-Bill’s billboard is receiving a flood of passionate reviews.

I guess that did not work out the way they wanted and the sign remains as it should!