Since the assault on the Bundy Ranch and through the occupation of the Malheur Wildlife Refuge in Oregon, Americans have become all to familiar with governmental overreach squeezing ranchers and land owners, stealing their property, and in the case of Lavoy Finicum, murdering innocent decanters. Here’s a petition, started by one militia group, calling for the end to the BLM.

Here’s the Petition. They have reached 10,000 but are still calling for signatures.

Abolish the Bureau of Land Management 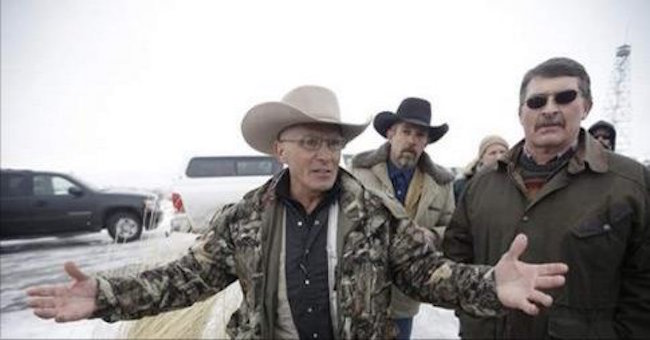 The Bureau of Land Management is an Unconstitutional Agency. According to Article 1, Section 8, Clause 17 of the U.S Constitution, this agency is not only illegal, but oppressive as well. Too many private land owners, specifically ranchers, have been targeted and abused by the BLM and now the actions of this agency have resulted in the death of an innocent American in Burns,Oregon. The Federal Government is illegally claiming and regulating STATE lands in America and it must be stopped. First the BLM, and then, the EPA MUST be abolished.

Also, read the updates and information regarding the ongoing oppression doled out by the BLM.

Jerry DeLemus posed for a photo near the Bundy ranch in Nevada in 2014 amid a standoff with federal agents. He was in U.S. District Court in Concord on Thursday to be arraigned on a raft of federal charges related to the standoff. (FACEBOOK)

Federal agents have arrested Jerry DeLemus, a local Tea Party leader who stood with Cliven Bundy’s armed resistance at his ranch in Nevada in 2014, in connection with the standoff and alleged assault.

DeLemus is facing nine federal charges based on an indictment brought in Nevada, including conspiracy to commit an offense against the United States, threatening a federal law enforcement officer, assault on a federal officer, obstruction of justice, attempting to impede or injure a federal law enforcement officer, interference with interstate commerce by extortion, and several firearms charges, according to court records.

At a court appearance Thursday afternoon in Concord, an overflow crowd of DeLemus supporters forced officials to move the proceedings to a larger room on the third floor of the courthouse. Supporters broke out in applause as DeLemus was led into the courtroom; he turned to blow them kisses.

The 64-page indictment cites DeLemus as one of eight defendants who “planned, organized, led, and/or participated as gunmen in the assault, all in order to threaten, intimidate, and extort the officers into abandoning approximately 400 head of cattle that were in their lawful care and custody.”

Court papers describe DeLemus as a “mid-level leader and organizer of the conspiracy,” who recruited, organized, trained and gave logistical support to gunmen and followers.

He is alleged to have been a leader and organizer of armed patrols and security checkpoints on the Nevada ranch.

DeLemus first traveled from New Hampshire to Nevada on April 10, 2014.

The indictment stems from the massive armed assault against federal law enforcement officers in and around Bunkerville, Nev., on April 12, 2014, which court records refer to as a conspiracy to thwart the seizure and removal of Cliven Bundy’s cattle from federal public lands.

Bundy was under a federal court order to remove his cattle from the public lands since 1998.

The crowd sang “God Bless America” Thursday as DeLemus was led out of the courtroom. Supporters held hands and joined in prayer just outside the door to courtroom 4, before declaring “Tyranny has come to New Hampshire” and “This is not my America.”