‘This policeman is a piece of s***’: Blinged up millionaire’s daughter with cash to burn is just one of the ‘spoiled Russian rich kids’ in 125mph ‘Grand Theft Auto’ Moscow joyride. Glamorous Russian ‘road devil’ busted in high-speed car chase in Moscow. Notorious traffic menace Mara Bagdasaryan, 23, was named as passenger. Already had speeding fines of £10,000 and was involved in a fatal collision. Footage of last week’s car chase was live-streamed by her ‘rich kid’ friend.

A glamorous brunette was a passenger in a ‘spoiled Russian rich kids’ 125mph death defying police chase through the streets of Moscow, MailOnline can reveal.

Nail-biting footage of the chase was live-streamed by Ruslan Shamsuarov, 20, a Russian oligarch’s son, as police gave chase. Shamsuarov, 20, was pulled from his high-powered Mercedes by special forces

Now it has emerged a friend of Shamsuarov in the £110,000 car was Mara Bagdasaryan, a notorious traffic menace who was involved in a high-speed fatal crash when she was a passenger.

Scroll down for videos 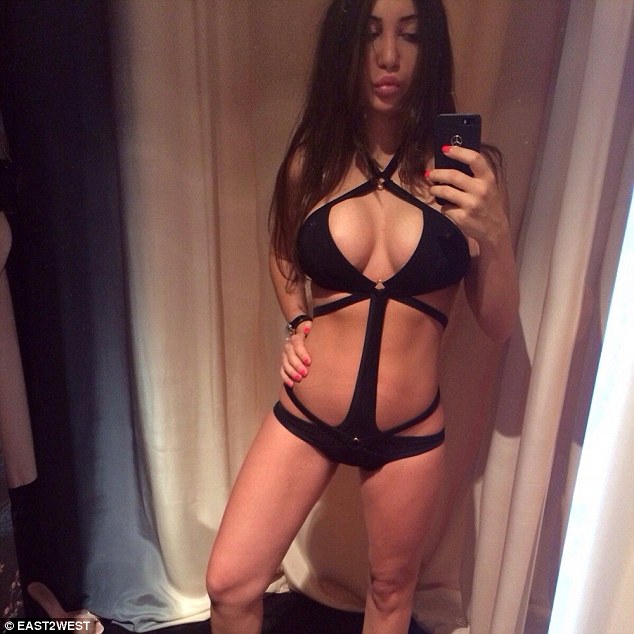 Menace: Millionaire’s daughter Mara Bagdasaryan, 23 was in the £110,000 Mecedes involved in the Grand Theft Auto high-speed car chase through the streets of Moscow which was live-streamed by a passenger 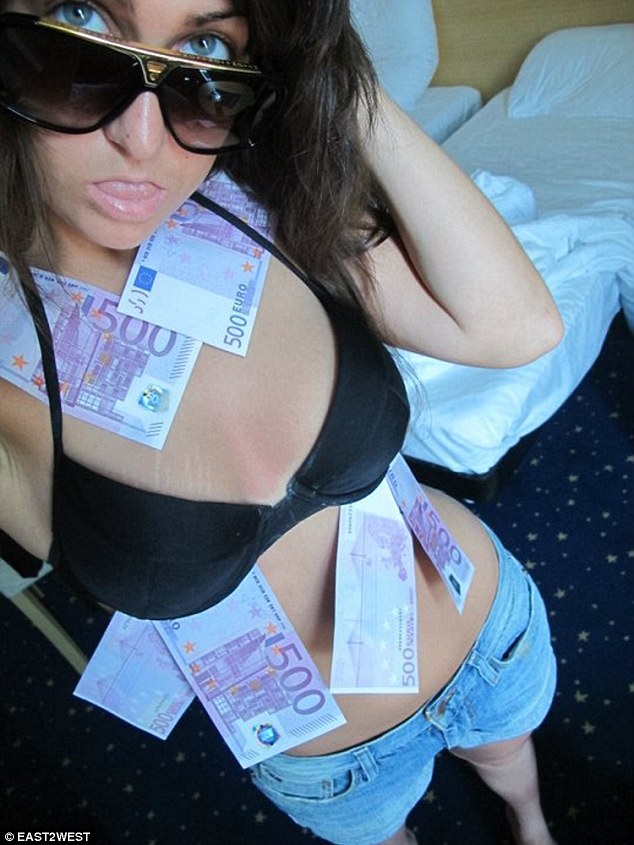 Show-off: ‘Road Devil’ Bagdasaryan makes no secret of her family’s fortune on social media. This Facebook photo shows her with €500 notes stuffed into her underwear 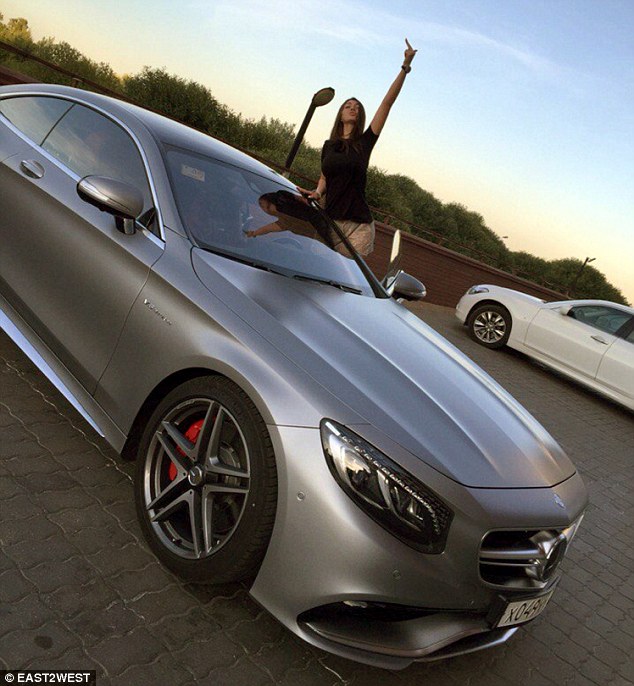 Wild child: Speed demon Bagdasaryan already had 342 speeding tickets worth £10,000 worth of speeding fines and was involved in a fatal collision just last year – and her meat factory owner father paid them all 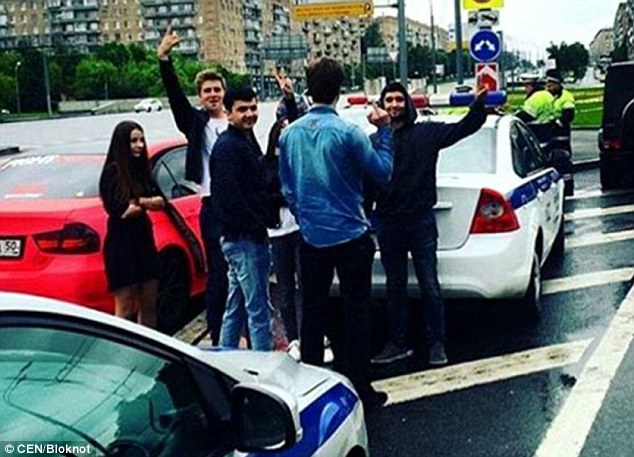 Chase: Bagdasaryan was among the ‘spoiled Russian rich kids’ chased by six police cars as they raced in her friend, oligarch’s son Ruslan Shamsuarov’s luxury Mercedes G-class in the early hours of May 23

The road devil, 23, who is the daughter of a meat factory tycoon, had already racked up an astonishing 342 speeding tickets totalling more than £10,000 – which her father paid in one go.

Bagdasaryan’s social media pages show off her wealthy lifestyle with photographs of her splashing her cash, and burning fistfuls of notes on a cooker.

One image shows her posing with €500 notes stuffed into her underwear, while another shocking post shows her using a cooker to set fire to wads of €500 and 5,000 rouble notes

Bagdasaryan and Shamsuarov, along with two other friends, were pursued by no fewer than six police cars as they raced in Shamsuarov’s luxury Mercedes G-class in the early hours of May 23.

They drove at 75mph along pedestrian pavements, according to evidence heard in court, and mocked and sneered at the traffic officers chasing them.

‘He is a piece of s***, this policeman,’ said one of the group, clearly audible in the footage.

‘We are on the way to find other policemen, to find out why on earth they decided to check us.’ 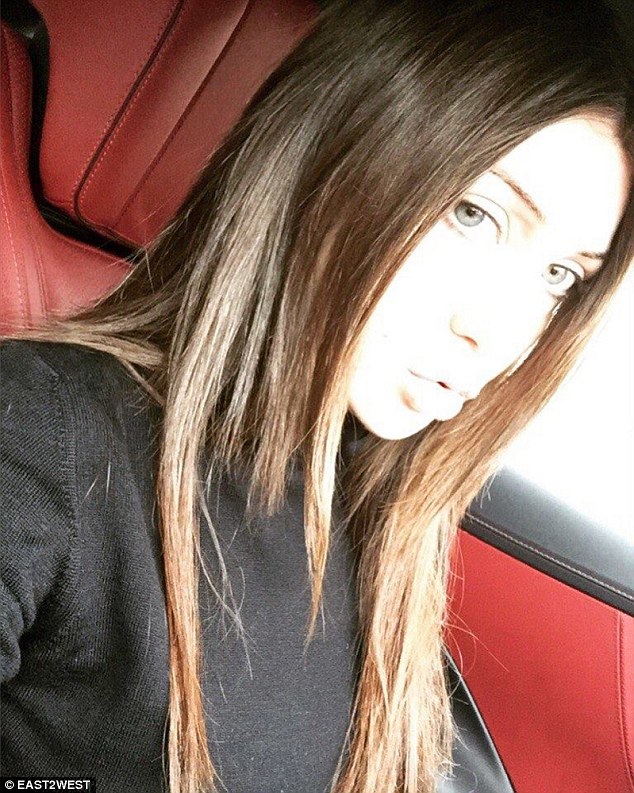 Rich kid’: Footage of the Grand Theft Auto style joyride was live streamed as police chased them through the streets of Moscow. One passenger was heard shouting ‘He is a piece of s***, this policeman’ 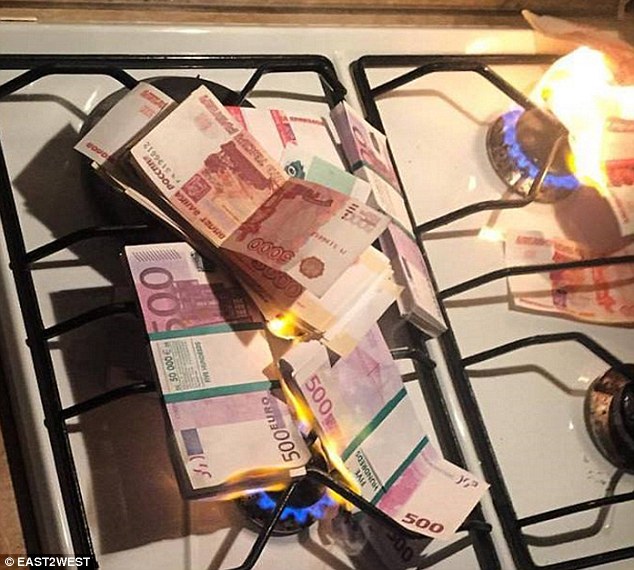 Extravagant: Bagdasaryan, who was in the car, is so rich she literally has money to burn. Her Facebook photo shows her setting light to wads of cash on a cooker including €500 and 5,000 Rouble notes 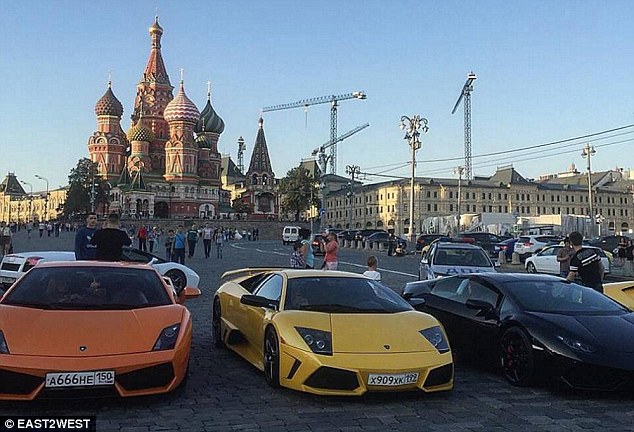 High-speed: Photos show Bagdasaryan has a passion for fast cars and motorbikes. The orange vehicle on the left is believed to belong to her

When first caught by Moscow traffic cops, the youths posted another video clip showing Shamsuarov sitting in the Mercedes and surrounded by police cars, claiming it was like a scene from Grand Theft Auto and laughing.

Shamsuarov and his friend Abduvakhob Madzhidov, 22, who was driving, were initially given spot spot fines of just £25 each for driving without number plates.

Even then, Shamsuarov’s father, vice president of oil giant Lukoil, tried to negotiate with police on behalf of his son, say Russian reports.

Thanks to their own video, it is clear the culprits were jumping red lights, speeding on the wrong side of the road, overtaking wildly and accelerating away from police before driving into a public park during the May 23 chase.

Fury sparked by the video prompted police chief Anatoly Yakunin to launch a full-scale investigation, beginning with the arrest of Madzhido for 15 days.

Shamsuarov, despite attempts to go into hiding, was traced to an elite Moscow clinic where he was reportedly being treated for an asthma attack and he was given 15 days of ‘administrative arrest’.

He already had a dozen unpaid speeding fines and was driving without a valid licence. 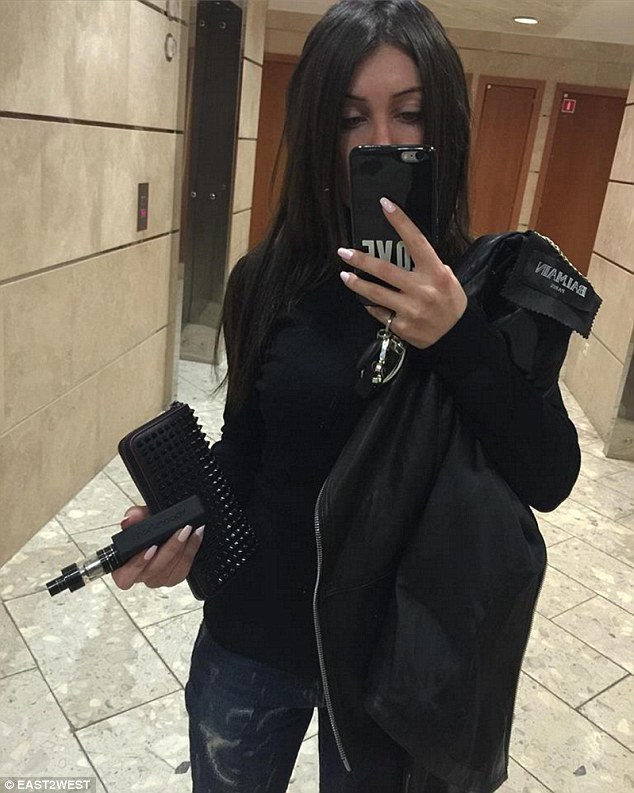 Notorious: Her social media pages are replete of images of her luxury lifestyle, with pictures of sports cars, selfies and her elite friendship circle 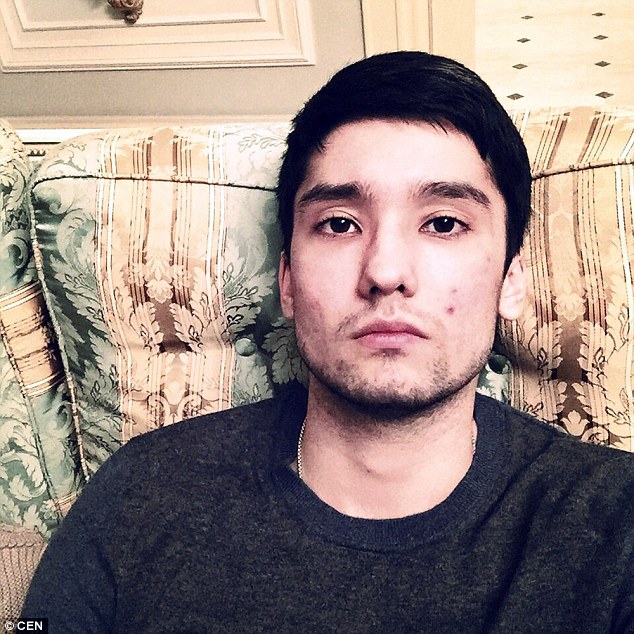 Fortune: Shamsuarov, 20, pictured, filmed the car chase. He is the son of the vice-president of Lukoil, Russia’s second largest oil company

Now the Russian Investigative Committee, the country’s version of the FBI has launched a full scale investigation into the chase.

Shamsuarov and Madzhidov are being probed for suspected hooliganism and disobeying police. They face a maximum sentence of seven years’ jail. Bagdasaryan is not being prosecuted.

Just one year ago Bagdasaryan was involved in a high-speed crash in which her 18-year-old friend Marik Galperin was killed, along with another man.

Although she was not held responsible for the crash, questions are now being asked in Russia about the high-speed antics of the country’s gilded youth.

Worries are being expressed that the children of the wealthy and powerful oligarch class are above the law, and get away with road crimes for which ordinary people would be severely punished. 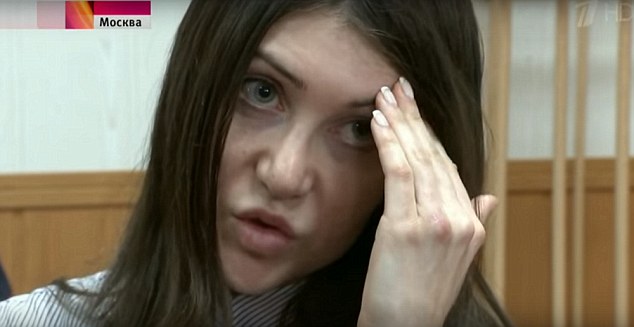 Punished: Those involved in the car chase were initially punished so lightly it sparked fury, prompting police to have a re-think and fully investigate the incident. Pictured, Bagdasaryan as she appeared in court this week 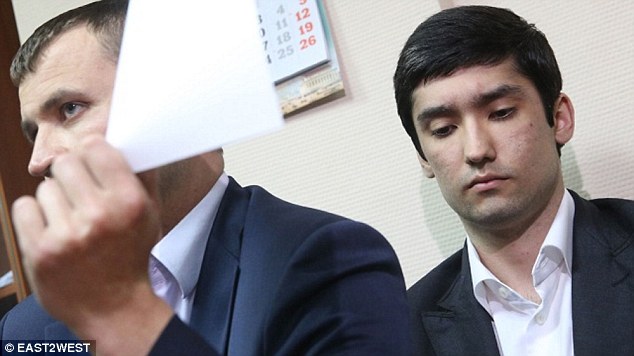 Trouble: Car owner Shamsuarov (pictured), tried to go into hiding and turned off all his phones. But police later traced him in Moscow. He now faces a maximum of seven years’ jail 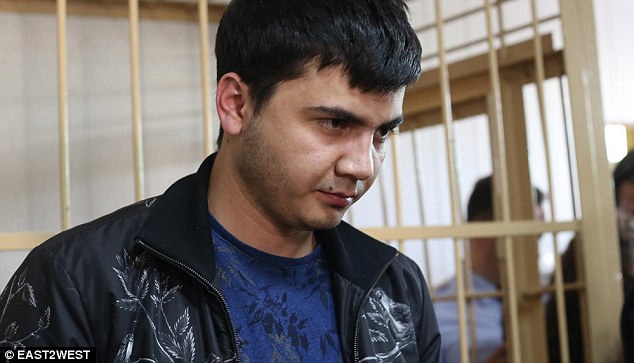 Busted: Abduvakhob Madzhidov (pictured) was driving the car as it sped through red lights, accelerated away from police cars and even tried to escape police by driving across a public park

Millionaire’s daughter Bagdasaryan was defiant on her arrest, posting a remarkable defence of herself and her elite friends on social media.

‘Ladies and gentlemen, do you seriously think we are guilty of all the troubles on all the roads of this country?’ she asked.

‘Aren’t you confused that one road accident of the so-called “golden youth” compares with 10,000 caused by ordinary people who kill others at pedestrian crossings without any moral problems/

‘And what about corrupt police who cover their drunk colleagues killing a child at a bus stop? How many of those?

‘But you got obsessed with me. I am guilty of four road accidents and no-one was killed in any of them. Nobody suffered but me. Not a single person. 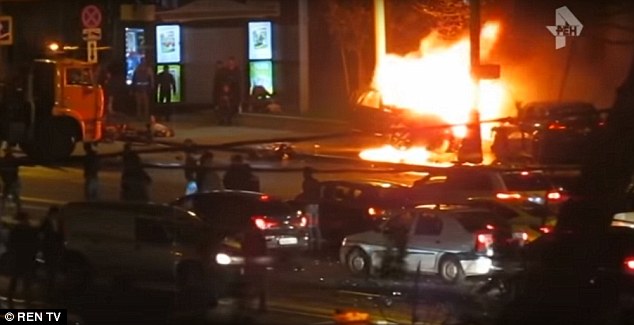 Danger: Bagdasaryan doesn’t seem to have been put off her high-speed antics, despite this horrific crash in October 2015 in which her 18-year-old friend Marik Galperin and another man lost their lives 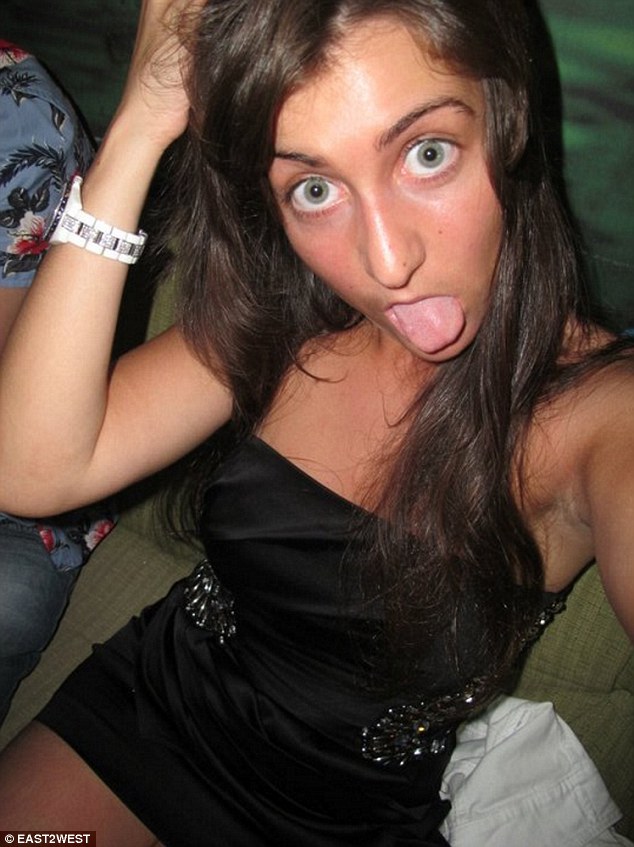 Guilt: Bagdasaryan tried to exonerate herself in the social media message, insisting that she was only the passenger in the most recent chase and in last year’s fatal collision 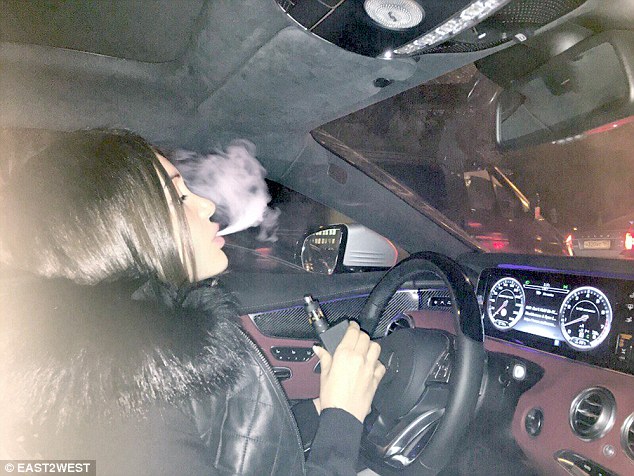 Rebel: Although Bagdasaryan had already acquired some 342 speeding tickets, totalling some £10,000, her wealthy father paid them all off in court in recent days 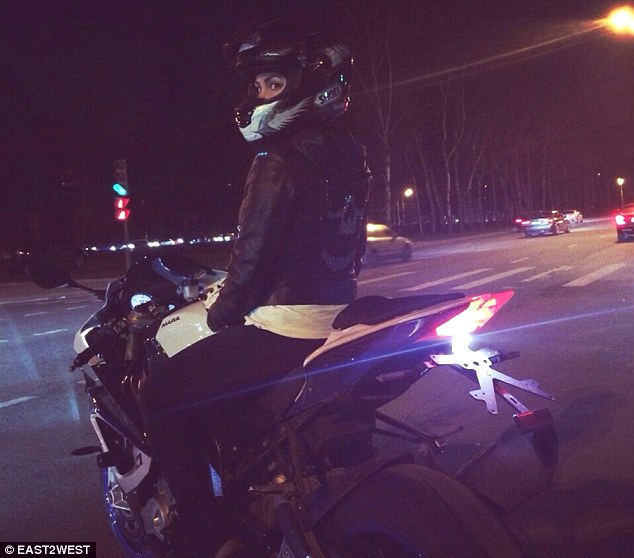 Defence: Bagdasaryan posted an extraordinary message on social media, saying: ‘You say I was driving that G-class but every idiot knows I was only a passenger.’ She added: ‘I was nearly killed myself. How am I guilty?’

‘You say I was driving that G-class but every idiot knows I was only a passenger.

‘And the passenger isn’t responsible for the aggression of the driver. It was the same in the crash [a year ago] where people were killed.

‘I was a passenger in the BMW M5. And I was nearly killed myself. How am I guilty?’