Social media has changed everything, even pop-culture-politics. And while the Obamas may not have made much of an impression on the Queen, it would seem that Harry has decided to step into the fray and speak up for military. It would also seem he is trying to bring the Obamas into the fray. Interesting since the Obama administration has been an abysmal supporter of our own military.

ELLE: UPDATE: The Queen just got in on the action. Her response to the Obamas’ challenge is quite simply perfect. 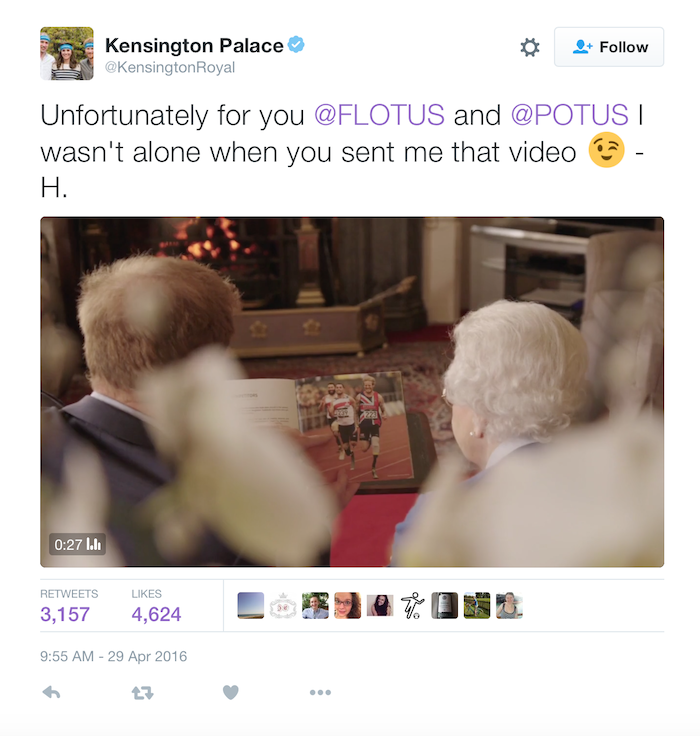 Harry’s twitter jabs were to promote the Invictus Games set to be held in Orlando in May.

Most of us will never know the full horrors of combat. Many Servicemen and women suffer life-changing injuries, visible or otherwise, whilst serving their country. How do these men and women find the motivation to move on and not be defined by their injuries?

How can they be recognised for their achievements and not given sympathy? Prince Harry asked these questions. On a trip to the Warrior Games in the USA in 2013 he saw how the power of sport could help physically, psychologically and socially. His mind was made up. London would host the inaugural Invictus Games, an international sporting event for wounded, injured and sick Service personnel.

The word ‘Invictus’ means ‘unconquered’. It embodies the fighting spirit of the wounded, injured and sick service personnel and what these tenacious men and women can achieve, post injury. The Games harness the power of sport to inspire recovery, support rehabilitation, and generate a wider understanding and respect for those who serve their country.

They may all be smiling there, but apparently Prince Harry issued a challenge before the Obamas left, inviting them to “bring it” at the Invictus Games, a sporting competition for wounded, injured, and sick military personnel that he started. The next event starts May 8 in Orlando. Consider the challenge accepted.

So, this is officially our favorite Twitter fight of all time.

So, it would seem that Obama loves vets when it gets him the spotlight, but not so much when the rubber meets the road.

This post in SitRep outlines how Obama has used military veterans benefits to manipulate Republican politics.

For only the fifth time during his entire presidency, Barack Obama exercised his veto, knocking down a defense authorization bill that would essentially expand retirement benefits for veterans, among many, many others things — including, not only controversial green lights for additional/continued spending, but enact a restructure of how the military budgets itself in the first place.

It would also prohibit the transfer of prisoners being held at Guantanamo Bay.

The White House said that the National Defense Authorization Act (NDAA) would tap an overseas contingency operations account designed for emergencies and war costs and use it as a “slush fund” to avoid budget restrictions. Those restrictions — known as sequestration — would impose offsetting across-the-board cuts if spending passed certain levels.

“The president believes that the men and women who serve in our armed forces deserve adequate and responsible funding, not through a gimmick or not through a slush fund but one that would — could withstand scrutiny,” said White House spokesman Eric Schultz.

The veto is a shot across the bow of Congress, which differs with Obama over the outlines of a budget for fiscal 2016. And Obama made an extra point by publicly signing the veto statement before a pool of White House press. The fiscal year ended Oct. 1 and a continuing resolution will temporarily keep the government open through Dec. 11.

According to Washington insiders, Obama is confident the House will uphold his veto.

And this in TruthUnsensord shows his priority is not with vets:

Once again President Obama shows where his loyalties lie and it is not with American veterans. He cut veteran benefits $2.6 BILLION and sent $4.5 BILLION to Syrian migrants in Europe.

VA officials have a slightly different take, saying the shortfall is a sign of their extraordinary efforts to get veterans the medical care they need, regardless of the cost.

Either way, the department has an enormous deficit to fill in the next three months and admits this could mean furloughs, hiring freezes and program cancellations if a solution can’t be found.

“We are going to do the right thing for veterans and be good stewards of taxpayer dollars,” VA Deputy Secretary Sloan Gibson told members of the House Veterans’ Affairs Committee on Thursday. “But to succeed, we need the flexibility to use funds to meet veterans needs as they arise.”

Without that, he said, “we get to dire circumstances before August. We will have to start denying care to some veterans.”

These aren’t the only examples of his vitriol toward our US military. Once again, Obama lies and vets take the hit.