The medics were working on preparing the operating room and the patient was lying naked on the operating table when the medics decided it would be a good idea to dance around the naked man while recording it so that it could be posted on Facebook.  After all, what are the chances of getting caught?

Five medics were fired after an outrageous video showing them mocking a man on a surgery table was leaked online.

The group of doctors and nurses can be heard laughing raucously as they danced around the patient at the Santa Cruz de Bocagrande clinic in Bolivar, Colombia.

The patient was unconscious and lying completely naked face down awaiting surgery on the operating table.

Authorities confirmed they have fired five workers in the video, saying the the video breaks ‘all health protocols’.

In a statement, clinic bosses said: ‘The respect for dignity of every patient is the most important thing in our clinic, therefore we strongly regret the inappropriate behaviour of those who are working as professionals in the health sector, seen in the video recorded in one of our surgery rooms.’

The statement added that the five employee’s actions ‘are against the dignity of the patient and are breaking the protocols and the political values of our institution focused on the quality and humanisation of our service.’

The clinic also apologised for the video.

A spokesman said: ‘This is the first time in seven years of good service that we are living a situation like this and we have taken some measures in order not to repeat these horrific acts.’ 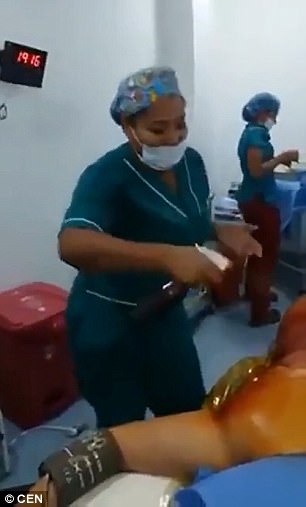 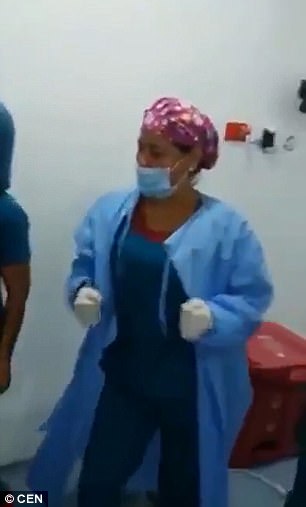