The ultra liberal Snopes “fact checking” site was caught lying about American flags at the Democratic convention on the first day.  At the start of the convention a couple of flags were brought out for the Pledge of Allegiance (Which the words of had to be on a teleprompter for the democrats) but, when the pledge was over the flags were removed from the venue.  Snopes insisted that there were flags at the convention and that accusations of republicans were utterly fale.

“Fact checker”  Dan Evon wrote that accusations that democrats didn’t have American flags during day one was false.  He offered up two pictures as proof of that.  The first picture was from the Pledge of Allegiance.  That was accurate.  But the second picture was actually from day two. 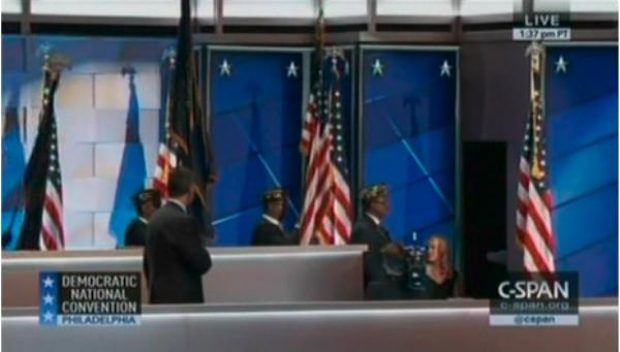 The Pledge of Allegiance

Sources making these claims cherry-picked photographs in order to make it appear that no U.S. flags (in either physical or digital form) were on display at the Democratic National Convention. But the Daily Caller, who was supposedly “at the Democratic National Convention” (yet used only news service photographs of the event) must not have looked very hard, as the scene at first day of the DNC exhibited a healthy share of red, white, and blue patriotism, in both digital and physical form: This was from Day Two

Day one, no flags in sight

The second picture Evon posted he took from Media Matters, who didn’t try to pretend was from day one.  Evon tried to bolster his claim by posting a video, from Fox News but like the picture it was from Day two.

Myth-busting website Snopes flagrantly lied about the lack of visible American flags on the first day of the Democratic Convention, claiming an image from the second day of the convention was actually from the first day in an attempt to debunk a factual story from The Daily Caller.