Yogi Berra is known for some really unusual quotes, but his quotes were never mean or angry nor were they as idiotic as what liberals have been known to say. 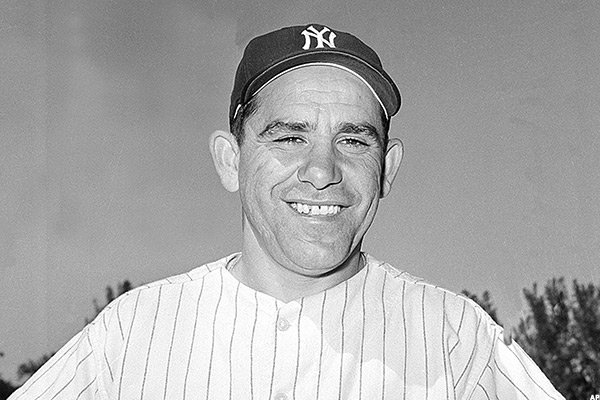 “Baseball is 90 percent mental. The other half is physical.”

“You can observe a lot by watching.”

About a St. Louis restaurant: “No one goes there anymore. It’s too crowded.”

“The future ain’t what it used to be.”

“I’m not going to buy my kids an encyclopedia. Let them walk to school like I did.”

Now, let’s compare that to liberals and remember, Yogi didn’t pretend he knew how to run a country:

Joe Biden on culturalism: “In Delaware, the largest growth of population is Indian Americans, moving from India. You cannot go to a 7/11 or a Dunkin’ Donuts unless you have a slight Indian accent. I’m not joking.”

Joy Behar on Economics: “Isn’t it a little racist to call it Black Friday?”

John Conyers on the Health Care Bill, which he voted for: “I love these members, they get up and say, ‘Read the bill … What good is reading the bill if it’s a thousand pages and you don’t have two days and two lawyers to find out what it means after you read the bill?'”

Al Gore: “During my service in the United States Congress, I took the initiative in creating the Internet.”

Congressman Hank Johnson on Guam: “My fear is that the whole island will become so overly populated that it will tip over and capsize.”

Nancy Pelosi on the economy: “every month that we do not have an economic recovery package 500 million Americans lose their jobs.”

Helen Thomas: Jews should “get the hell out of Palestine” and “go home” to Germany and Poland.

Barack Obama on a tornado that killed twelve people: “In case you missed it, this week, there was a tragedy in Kansas. Ten thousand people died – an entire town destroyed”

Harry Reid on Iraq: “This war is lost and the surge is not accomplishing anything.”  (Note:  What makes this stupid is he said it before the surge even started.  Once it did start it was extremely successful)

Joe Biden on the economy: “The number one job facing the middle class, and it happens to be, as Barack says, a three-letter word: jobs. J-O-B-S.”

Marion Barry, former mayor of Washington, DC: “If you take out the killings, Washington actually has a very very low crime rate.”

California Senator Barbara Boxer: “Those who survived the San Francisco earthquake said, ‘Thank God, I’m still alive.’ But, of course, those who died, their lives will never be the same again.”

Jerry Brown, former governor of California, and current candidate for the same position: “The conventional viewpoint says we need a jobs program and we need to cut welfare. Just the opposite! We need more welfare and fewer jobs.”

Marion Barry, former mayor of Washington, DC: “I am clearly more popular than Reagan. I am in my third term. Where’s Reagan? Gone after two! Defeated by George Bush and Michael Dukakis no less.”

Al Gore on zoology: “A zebra does not change its spots.”

Congresswoman Maxine Waters on socialism: “Guess what this liberal would be all about? This liberal will be about socializing…uh, um…Would be about, basically, taking over, and the government running all of your companies.”

Nancy Pelosi on legislation: “But we have to pass the bill so that you can find out what is in it.”

“You Created “Us”…Open Letter to Liberals