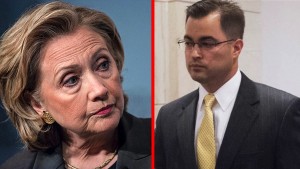 The Obama legacy should be lost emails.  Every time a new corruption probe of the Obama caliphate occurs, the first casualty is the emails.  The IRS scandal is a perfect example.  Mysteriously, all of Lois Lerner’s emails were lost when her computer crashed.  Then it was discovered that her emails were sitting in a warehouse on back up tapes.  Then John  Koskinen (Who in my opinion should be occupying a cell at Fort Leavenworth) announced that all of the back up tapes were wiped clean, even though there were multiple court and congressional subpoenas for their preservation.

“The Department has searched for Mr. Pagliano’s email pst file and has not located one that covers the time period of Secretary Clinton’s tenure.”

This would lead me to believe that Pagliano had an account on the Hillary server and that it has been wiped clean.  The State Department has found a small amount of his emails, presumably gleaned from the email accounts of some of the people he corresponded with.  When you couple this information with the fact that he has taken the fifth with investigators before accepting immunity, makes me believe there is much he knows that neither he nor Hillary wants revealed.

Pagliano was obligated to turn in all emails accumulated during his employment at the State Department under Hillary.  Evidently he didn’t.