Gravity, a British start up founded by entrepreneur Richard Browning has invented and built a human propulsion jet suit that really works.  The engines strap onto the legs and arms and you steer it by moving your body.  It works along the same lines as the one Anthony Stark built in the comic Iron Man.  Gravity foresees people using these jets to commute back and forth to work.  The fuel compartments hold enough to keep you and your suit aloft for a long time.

Gravity’s technology combines body mounted miniaturised jet-engines, with a specially designed exo-skeletal suit, allowing the pilot to vertically take off and fly using the human body to control the flight.

Gravity is launching the ‘Daedalus’, its mark 1 propulsion suit. In doing so the company say they are inventing an entirely new aviation category.

The company claims the suit can fly in most locations and, despite being capable of flying at several hundred miles per hour, and at thousands of feet, normal operation of the suit sees the wearer flying at no more than a couple of metres.

Richard Browning said: ‘This is a momentous point in aviation history. Daedalus is simply the beginning of a core technology that has endless potential in aviation, commercial and entertainment applications. 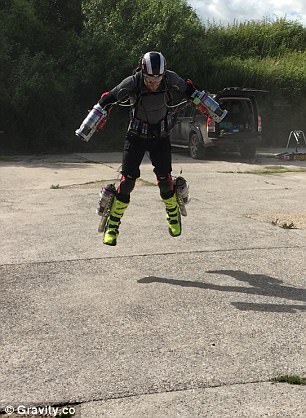 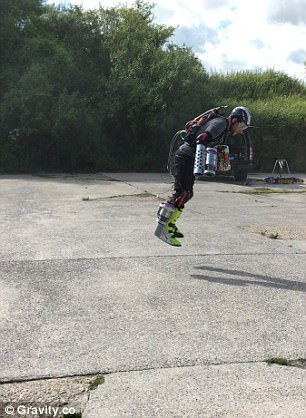