Elder Patriot – The question I’m asked most often is when President Trump and his team going to start bringing charges against those Deep State operatives trying to undo his election?  These people voted for Trump and they want to know why this fruitless investigation hasn’t been concluded by now so their president can govern more effectively.

Two events today would indicate the wait is about over.

A Rigged System – They don’t want to turn over Documents to Congress. What are they afraid of? Why so much redacting? Why such unequal “justice?” At some point I will have no choice but to use the powers granted to the Presidency and get involved!

At some point I will have no choice but to use the powers granted to the Presidency and get involved!

This is reminiscent of Muhammad Ali playing rope-a-dope with George Foreman.  Trump has been letting Rosenstein, Mueller, Comey, Brennan, Clapper, and the mainstream media punch themselves out.  After nearly two years of investigating Trump they have found nothing and the American people, as tolerant as they have been with all of this, are growing weary of their president being handcuffed in this manner.

Now it appears that Trump has begun punching off the ropes.  The second event came this afternoon with the announcement that legal giant Emmet Flood has joined the president’s legal team.

Flood has been characterized as being every bit Mueller’s equal – both intellectually and in toughness.  Insiders say that any chance Mueller had for an interview with Trump is now over.

So where does that leave the American people?  After all, Trump is our duly elected president and it is – or it’s supposed to be – our government.  But, if the Deep State is allowed to have its way that idea will be lost forever.

First, let’s return to Rosenstein’s declaration of war against the Constitution yesterday in response to being asked about the Articles of Impeachment being drafted against him by House Republicans:

“I think they should understand by now, the Department of Justice is not going to be extorted.”

That statement alone takes a boatload of hubris.  Rosenstein and Mueller, working on behalf of the Deep State that they are defending, are doing exactly that to the President of the United States.

But, there’s so much more wrong with Rosenstein’s strident stonewalling in turning over documents, that could prove the DOJ and FBI wrongdoing under Obama to the Constitutionally prescribed oversight committees, that simply cannot be defended.

By order of the Constitution, both the DOJ and FBI report to the president and their employees serve at the president’s leisure.

The Constitution was conceived by the Framers to protect the “people,” not to protect the government.  Trump is a popularly elected president who reports and answers directly to the “people.”  His re-election depends on meeting their expectations.

Employees at the DOJ and FBI apparently think they answer to no one.  That is, in and of itself, the definition of a constitutional crisis. 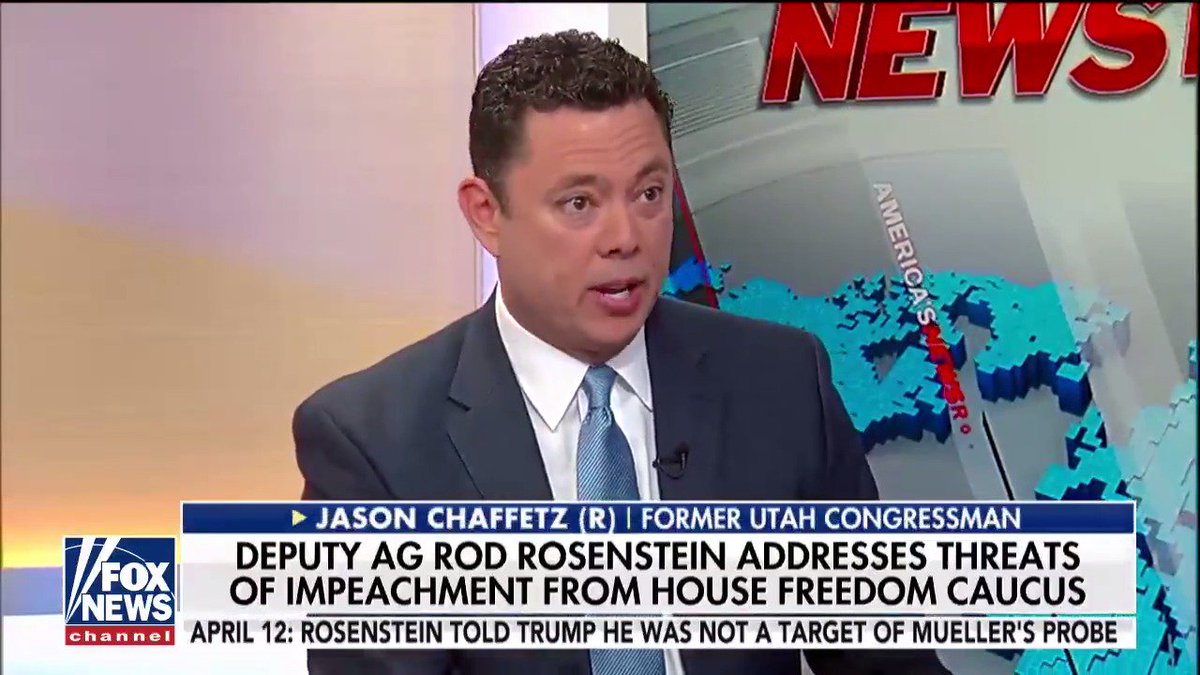 .@jasoninthehouse: “This Deep State doesn’t want to be exposed. They don’t want to turn over the documents.”

The Framer’s envisioned a government where the “people” governed through their elected officials.  This provided the “people” with the right to remove any representative who they became disenchanted with.  No such option exists for the “people” when it comes to political appointees or their hires.

In the instance where firings by the president may be politically impractical, impeachment by Congress becomes the mechanism for their removal.

Rosenstein is himself creating an unnecessary constitutional crisis.  If there is nothing to hide then why is he stonewalling the proper oversight committees from seeing what they are asking for?  If something untoward or illegal took place under Obama we, “the people,” have a right to know.

The Deep state has gone all in and President Trump has stood firm.  Let’s hope we’ve entered the end game because it’s time the Deep State is purged and the government is returned to the “people.”