Protesters clashed with riot police in Missouri overnight after police reports released earlier on Friday said a black teen was a suspect in the theft of cigars from a store minutes before an officer shot him dead.

While Ferguson, Missouri had been calmer over the last 24 hours after local law enforcement was replaced by state police led by an African-American captain, racially charged protests entered their sixth night since the Aug. 9 death of Michael Brown.

Highway Patrol Captain Ron Johnson said police fired a teargas canister at a crowd near a food and liquor store and broader violence and looting erupted.

The police reports released earlier did not explain what, if anything, Brown’s suspected theft had to do with the fatal encounter. There remains little clarity surrounding the moments leading up to Brown’s death.

Police were diverting traffic off a road that has become a major thoroughfare for demonstrators and a Reuters witness said the smell of gas drifted through the area.

About 200 people assembled in the area as rain fell, and some protesters threw bottles at riot gear-clad police who ordered the crowd to disperse. 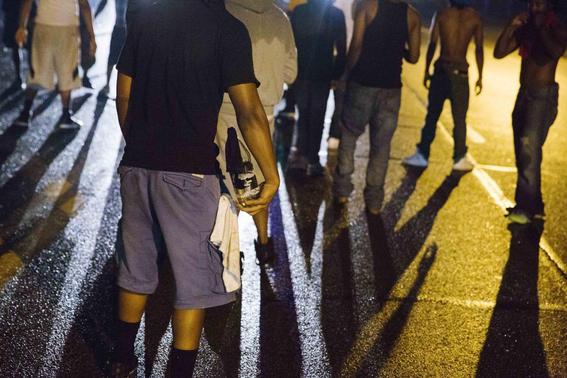 A protester carries a Molotov cocktail during on-going demonstrations to protest against the shooting of Michael Brown, in Ferguson, Missouri, August 16, 2014. CREDIT: REUTERS/LUCAS JACKSON

Some chanted “hands up, don’t shoot”, while the Reuters photographer saw some people break into a handful of retail stores, one of which was the store Brown was suspected of robbing. Others who tried to enter the premises were stopped by other protesters.

Local broadcaster KMOV cited police as saying some protesters had started fires, including one at a store, and that one officer was hit in head with a bottle or a brick.

“I will say we talked all day about the release of the video tape at the food mart,” Captain Johnson, overseeing security since Thursday, told KMOV. “We had concerns that this would happen.”