Tim Kaine’s youngest son was arrested in St Paul, Minnesota for felony rioting during an anti Trump rally formed to counter a pro-Trump rally.  Linwood Kaine was arrested after he disrupted the Donald Trump rally.

Kaine was one of six people arrested on suspicion of a felony charge of riot near the Minnesota State Capitol building on Saturday after taking part in a counter-protest.

Opponents of Trump clashed with supporters of the President.

According to booking information from Ramsey County sheriff’s department, Kaine, 24, was facing one charge of felony rioting following his arrest shortly before 1pm on Saturday.

According to the Pioneer Press, Kaine is a resident of Minnesota and was released from jail on Tuesday morning.

He said: ‘We love that our three children have their own views and concerns about current political issues. They fully understand the responsibility to express those concerns peacefully.’

Local police claimed about 50 protesters confronted the 400 Trump supporters and at one stage a smoke bomb was let off in the Capitol building’s rotunda.

Linwood Kaine is known among friends as Woody.

He was not prominent during his father’s election campaign.

It is understood he has studied video although it is not known whether he is still in college or is working. 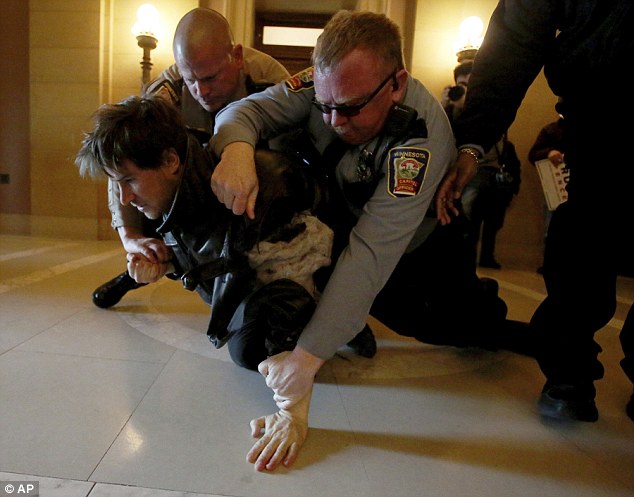